The Mile Championship is an International Grade I flat horse race in Japan for three-year-old and above thoroughbreds run over a distance of 1,600 metres (approximately 1 mile) on the turf at Kyoto Racecourse in November. It was first run in 1984.

It is traditionally considered as a step race of Hong Kong Mile in Japan Racing. Particularly before the introduction of Hanshin Cup (Grade 2, 1400m) in 2006, as being the last graded event in mile distance in the Japan racing season and most of the winners or runners-up will travel to Hong Kong pursuing extra prize money. Including the only Japanese winner by then Hat Trick.

The Hong Kong Mile is a Group 1 flat horse race in Hong Kong which is open to thoroughbreds aged three years or older. It is run over a distance of 1,600 metres at Sha Tin, and it is scheduled to take place each year in mid December. 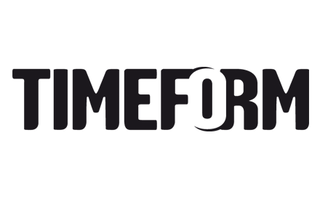 Timeform is a sports data and content provider located in Halifax, West Yorkshire, England founded in 1948 to provide information to fans, bettors, and others involved in the horse racing industry. The company was purchased by the sports betting exchange Betfair in December 2006. Since 2 February 2016, it has been owned by Flutter Entertainment.

The Yasuda Kinen is a Japanese International Grade I Thoroughbred horse race held at the Tokyo Racecourse in Tokyo. Raced annually each June, the Yasuda Kinen is run at a distance of eight furlongs on turf and is open to horses three years of age and up. The event was first run in 1951 as the Yasuda Sho in honor of Izaemon Yasuda, the founding chairman of the Japan Racing Association. Following the death of Mr. Yasuda, in 1958 the race name was changed to the Yasuda Kinen.

The Champions Mile is a Group 1 flat horse race in Hong Kong for three-year-old and above thoroughbreds run over a distance of 1,600 metres on the turf at Sha Tin Racecourse with the total purse of HK$14m in 2014/15, approximately US$1.8m.

The Queen Elizabeth II Cup is an International Grade 1 flat horse race in Japan for three-year-old and above thoroughbred fillies and mares run over a distance of 2,200 metres on the turf at Kyoto Racecourse in November.

The Britannia Stakes is a flat handicap horse race in Great Britain open to three-year-old colts and geldings. It is run at Ascot over a distance of 1 mile on the straight course, and it is scheduled to take place each year in June on the third day of the Royal Ascot meeting.

The Patton Stakes is a Listed flat horse race in Ireland open to thoroughbreds aged three years old. It is run at Dundalk over a distance of 1 mile, and it is scheduled to take place each year in late February or early March. 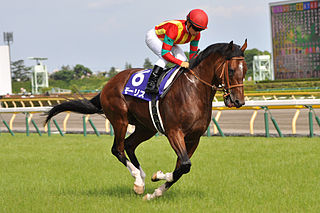 A Shin Hikari is a Japanese Thoroughbred racehorse. He began his racing career as a three-year-old in 2014 when he won his first five races including the Listed Ireland Trophy. In the following year he won the Mijakooji Stakes, Epsom Cup and Mainichi Okan in Japan before establishing himself as one of the best racehorses in the world with a victory in the Hong Kong Cup. In the spring of 2016 he was sent to Europe and began his campaign with a ten length win in the Prix d'Ispahan.

Mikki Isle is a Japanese Thoroughbred racehorse and sire. After winning two of his three starts as a juvenile he emerged as a top-class performer in 2014 when his wins included the Nikkan Sports Sho Shinzan Kinen, Arlington Cup, NHK Mile Cup and Swan Stakes. He failed to win as four-year-old but ran well in defeat in major races such as the Takamatsunomiya Kinen and the Sprinters Stakes. He reached his peak in 2016 when he won the Hankyu Hai and ran second in both the Takamatsunomiya Kinen and the Sprinters Stakes before recording his biggest win in the Mile Championship. At the end of the year he took the JRA Award for Best Sprinter or Miler. He was a front-running racehorse and was often vulnerable to fast-finishing opponents.

The New Zealand Trophy is a Japanese Grade 2 flat horse race in Japan for three-year-old Thoroughbreds. It is run over a distance of 1600 metres at Nakayama Racecourse in April. 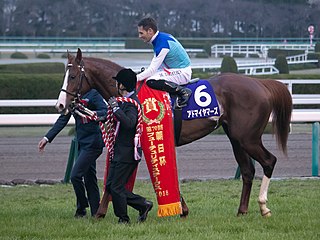 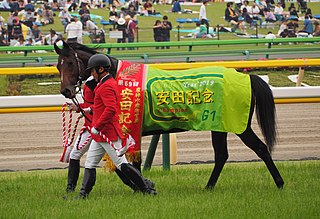 Indy Champ is a Japanese Thoroughbred racehorse. After winning his only start as a juvenile in 2017 he showed good form in the following year when he won three races and finished third in the Mainichi Hai. He emerged as a top-class performer in 2019 winning the Tokyo Shimbun Hai in February and going to take both of Japan's open age Grade 1 mile races, the Yasuda Kinen and the Mile Championship. In the following years he won the Yomiuri Milers Cup and was placed in both the Yasuda Kinen and the Mile Championship. 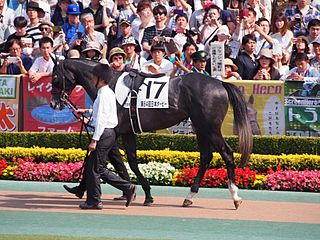 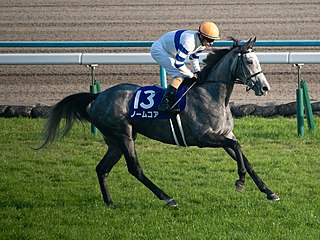