Moira Walley-Beckett is a Canadian television actress, producer, and writer. She was a writer and producer for the AMC drama Breaking Bad and the creator of two television series, Flesh and Bone and Anne with an E (titled Anne during the first season).

Walley-Beckett was raised in Vancouver, British Columbia, Canada, and attended the Banff School of Fine Arts. [1] In 1982, she joined the Arts Club Theatre Company. [2]

Walley-Beckett worked from the mid-1980s until the early-2000s as a television actress. She guest-starred on many series, including MacGyver , 21 Jump Street , Wiseguy , Chicago Hope , Diagnosis Murder and ER . [3]

She began writing for television in 2007 as a staff writer for the short-lived NBC detective drama Raines , starring Jeff Goldblum. In 2008 she joined the writing staff for the legal drama Eli Stone and penned the episode "Heal the Pain".

She joined Breaking Bad as a story editor for the second season and wrote the episodes "Breakage" [4] and "Over". [5] The second season writing staff were nominated for the Writers Guild of America (WGA) Award for best drama series at the February 2010 ceremony for their work on the second season. [6] She was promoted to co-producer for the third season in 2010 and wrote the episodes "Mas" [7] and (with Sam Catlin) "Fly." She was promoted again to producer for the fourth season in 2011.

For the fifth season, Walley-Beckett wrote "Gliding Over All" and "Ozymandias"; the latter received universal praise from critics, and has since been called one of the greatest episodes of television ever broadcast. On August 25, 2014 she won the Primetime Emmy Award for Outstanding Writing for a Drama Series for "Ozymandias", becoming the first solo woman to win the award in the Drama category since Ann Biderman won in 1994. [8]

In January 2016, it was announced that Walley-Beckett would create, write and executive produce a television series based on children's classic Anne of Green Gables for Canada's CBC. [10] Netflix came aboard in August to distribute the show internationally. [11] The series, Anne with an E (titled Anne during the first season) aired on CBC in Canada and was later made available for streaming on Netflix. The series premiered on March 19, 2017, on CBC and on May 12 internationally. It was renewed for a second season on August 3, 2017, and for a third season in August 2018. Shortly after the third season was released in Fall 2019, CBC and Netflix announced that the series was canceled.

She wrote the 2018 film The Grizzlies alongside Justified creator Graham Yost, directed by Miranda de Pencier. [12]

George Vincent Gilligan Jr. is an American writer, producer, and director. He is known for his television work, specifically as creator, head writer, executive producer, and director of AMC's Breaking Bad (2008–2013) and its spin-off Better Call Saul (2015–present). He was a writer and producer for The X-Files and was the co-creator of its spin-off, The Lone Gunmen (2001). 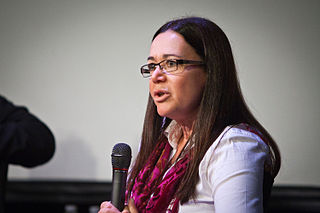 The third season of the American television drama series Breaking Bad premiered on March 21, 2010, and concluded on June 13, 2010. It consisted of 13 episodes, each running about 47 minutes. AMC broadcast the third season on Sundays at 10:00 pm in the United States. The complete third season was released on Region 1 DVD and Region A Blu-ray on June 7, 2011. 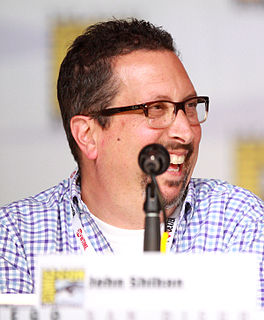 John Shiban is an American television writer and producer. He worked in both capacities on The X-Files and its spin-off The Lone Gunmen, Star Trek: Enterprise, Smallville, Supernatural, Legend of the Seeker, Breaking Bad, and The Vampire Diaries. In 1997, he was nominated for a Primetime Emmy Award for Outstanding Writing for a Drama Series for his work on The X-Files episode "Memento Mori". He shared the nomination with co-writers Chris Carter, Frank Spotnitz, and Vince Gilligan. In 1998, Shiban shared a nomination for the Primetime Emmy Award for Outstanding Drama Series with The X-Files production team.

George Mastras, Jr. is a Greek American author, screenwriter, director, and television producer. He has worked on all five seasons of the AMC drama Breaking Bad. He won the Pen USA Literary Award in 2009, won a Primetime Emmy Award in 2013 and 2014 as one of Breaking Bad's producers, was nominated for the Edgar Allan Poe Award, and won three Writers Guild of America (WGA) Awards, for his work on the series. Mastras is also the author of the novel Fidali's Way.

Sam Catlin is an American television writer, director, and producer. He is the showrunner of AMC's Preacher, and previously worked as a writer/producer on Breaking Bad. He has been nominated for a Writers Guild of America (WGA) Award for his work on the series.

Kater Gordon is an American television writer and philanthropist. She worked on the AMC drama Mad Men, and won a Writers Guild of America (WGA) Award and an Emmy Award.

Stefan Schwartz is an English and Canadian film and television director, writer and actor, most known for the feature film Shooting Fish and his work on the BBC's Spooks and Luther, AMC's The Walking Dead and Fear The Walking Dead as well as The Americans and The Boys.

"Over" is the tenth episode of the second season of the American television action drama series Breaking Bad. It was written by Moira Walley-Beckett and directed by Phil Abraham. 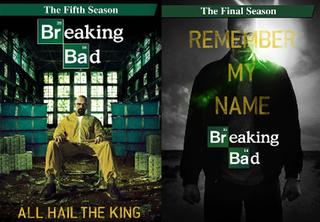 The fifth and final season of the American television drama series Breaking Bad premiered on July 15, 2012, and concluded on September 29, 2013 on AMC in the United States and Canada. The 16-episode season is split into two parts, each containing eight episodes. The first part of the season was broadcast from July 15 to September 2, 2012, and aired on Sundays at 10:00 pm ET. The second part was broadcast from August 11 to September 29, 2013, aired on Sundays at 9:00 pm. It debuted in the UK and Ireland on Netflix, showing one day after the episodes aired in the U.S. and Canada. Part 1 was released on region 1 DVD and region A Blu-ray on June 4, 2013, and part 2 was released on November 26, 2013.

The 65th Primetime Emmy Awards, honoring the best in prime time television programming from June 1, 2012 until May 31, 2013, were held on Sunday, September 22, 2013 at the Nokia Theatre in Downtown Los Angeles, California. CBS televised the ceremony within the United States. Actor Neil Patrick Harris hosted the Primetime Emmys for the second time. The Creative Arts Emmy Awards ceremony was held on September 15.

Gennifer Hutchison is an American television and film writer. She is best known for her work on the television series Breaking Bad. She won two Writers Guild of America Awards for her work on the series as a part of the writing team in 2012 and 2013. She is currently a writer and executive producer on Better Call Saul. 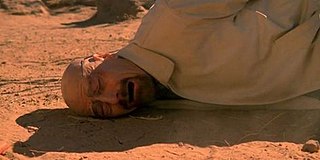 "Ozymandias" is the fourteenth episode of the fifth season of the American television drama series Breaking Bad, and the 60th episode of the series. Written by Moira Walley-Beckett and directed by Rian Johnson, it aired on AMC in the United States and Canada on September 15, 2013. The episode's narrative concludes the previous episode's cliffhanger and includes the deaths of Hank Schrader and Steven Gomez.

Flesh and Bone is an American drama television miniseries created by Moira Walley-Beckett. It premiered on November 8, 2015, on the American cable television network Starz. Ethan Stiefel was a consultant and choreographer on the series.

"Más" is the fifth episode of the third season of the American television drama series Breaking Bad, and the 25th overall episode of the series. Written by Moira Walley-Beckett and directed by Johan Renck, it aired on AMC in the United States and Canada on April 18, 2010.

"Five-O" is the sixth episode of the first season of the AMC television series Better Call Saul, the spinoff series of Breaking Bad. The episode aired on March 9, 2015, on AMC in the United States. Outside of the United States, the episode premiered on streaming service Netflix in several countries. 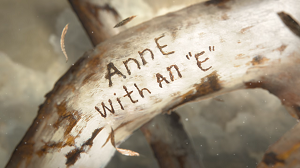