Mon Keo (also Mom Kaeo or Mom Kaeo) was the king of the Laotian Kingdom of Lan Xang between 1627 and 1633, Reigning with the regnal name of Samdach Brhat-Anya Chao Manikya Kaeva Raja Sri Sadhana Kanayudha, he was the son of King Voravongsa II and brother of King Ouphagnauvarath I. [1]

His reign was filled with quarrels and rebellions between various claimants to the throne. He died in 1633 being succeeded by his son Tone Kham.[ citation needed ] 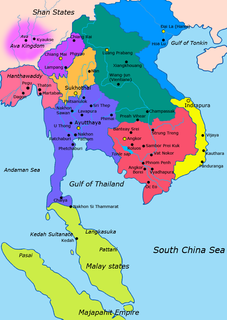 The Vietnamese-Laotian War of 1479–80, also known as the White Elephant War, was a relatively short conflict between the Laotian mandala of Lan Xang and the Vietnamese kingdom of Đại Việt. The war and its aftermath contributed significantly to the formation of Laos.