MycoBank is an online database, documenting new mycological names and combinations, eventually combined with descriptions and illustrations. It is run by the Centraalbureau voor Schimmelcultures fungal biodiversity center in Utrecht. [1]

Each novelty, after being screened by nomenclatural experts and found in accordance with the ICN (International Code of Nomenclature for algae, fungi, and plants), is allocated a unique MycoBank number before the new name has been validly published. This number then can be cited by the naming author in the publication where the new name is being introduced. Only then, this unique number becomes public in the database.

By doing so, this system can help solve the problem of knowing which names have been validly published and in which year.

MycoBank is linked to other important mycological databases such as Index Fungorum, Life Science Identifiers, Global Biodiversity Information Facility (GBIF) and other databases. MycoBank is one of three nomenclatural repositories recognized by the Nomenclature Committee for Fungi; the others are Index Fungorum and Fungal Names. [2]

Tolypocladium inflatum is an ascomycete fungus originally isolated from a Norwegian soil sample that, under certain conditions, produces the immunosuppressant drug ciclosporin. In its sexual stage (teleomorph) it is a parasite on scarab beetles. It forms a small, compound ascocarp that arises from the cadaver of its host beetle. In its asexual stage (anamorph) it is a white mold that grows on soil. It is much more commonly found in its asexual stage and this is the stage that was originally given the name Tolypocladium inflatum.

Dothideomycetes is the largest and most diverse class of ascomycete fungi. It comprises 11 orders 90 families, 1300 genera and over 19,000 known species. Traditionally, most of its members were included in the loculoascomycetes, which is not part of the currently accepted classification. This indicates that several traditional morphological features in the class are not unique and DNA sequence comparisons are important to define the class. 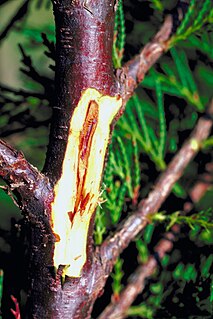 Botryosphaeria dothidea is a plant pathogen that causes the formation of cankers on a wide variety of tree and shrub species. It has been reported on several hundred plant hosts and on all continents except Antarctica. B. dothidea was redefined in 2004, and some reports of its host range from prior to that time likely include species that have since been placed in another genus. Even so, B. dothidea has since been identified on a number of woody plants—including grape, mango, olive, eucalyptus, maple, and oak, among others—and is still expected to have a broad geographical distribution. While it is best known as a pathogen, the species has also been identified as an endophyte, existing in association with plant tissues on which disease symptoms were not observed. It can colonize some fruits, in addition to woody tissues.

Waitea circinata is a species of fungus in the family Corticiaceae. Basidiocarps are thin, effused, and web-like, but the fungus is more frequently encountered in its similar but sterile anamorphic state, sometimes called Rhizoctonia zeae. Waitea circinata is best known as a plant pathogen, causing commercially significant damage to cereal crops and turf grass.

Polytolypa is a monotypic genus of fungus containing the single species Polytolypa hystricis. First classified in the Onygenaceae family, as of 2008 it is considered to be in the Ajellomycetaceae, although there is still uncertainty as to its phylogenetic relationships with other similar genera. This species is only known from a single specimen derived in the laboratory from a specimen of dung of the North American porcupine, Erethizon dorsatum, collected in Ontario, Canada. Polytolypa hystricis contains bioactive compounds that have antifungal activity.

Episphaeria is a genus of fungus in the Agaricales. The genus is monotypic, and contains the single rare species Episphaeria fraxinicola, found in Europe. Its familial position is not known with certainty. The tiny fruit bodies of the fungus resemble minute, white cups that grow scattered or in groups on the bark of ash trees. 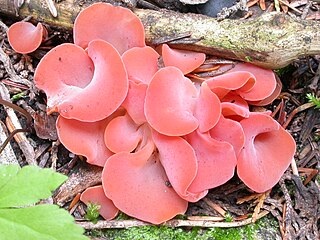 Guepinia is a genus of fungus in the Auriculariales order. It is a monotypic genus, containing the single species Guepinia helvelloides, commonly known as the apricot jelly. The fungus produces salmon-pink, ear-shaped, gelatinous fruit bodies that grow solitarily or in small tufted groups on soil, usually associated with buried rotting wood. The fruit bodies are 4–10 cm (1.6–3.9 in) tall and up to 17 cm (6.7 in) wide; the stalks are not well-differentiated from the cap. The fungus, although rubbery, is edible, and may be eaten raw with salads, pickled, or candied. It has a white spore deposit, and the oblong to ellipsoid spores measure 9–11 by 5–6 micrometers. The fungus is widely distributed in the Northern Hemisphere, and has also been collected from South America.

Circulocolumella is a genus of fungus in the Hysterangiaceae family. The genus is monotypic, containing the single species Circulocolumella hahashimensis, found in the Bonin Islands of Japan.

Purpureocillium is a fungal genus in the Ophiocordycipitaceae family. The genus now contains at least 5 species with the type species Purpureocillium lilacinum, a common saprobic, filamentous fungus. It has been isolated from a wide range of habitats, including cultivated and uncultivated soils, forests, grassland, deserts, estuarine sediments and sewage sludge, and insects. It has also been found in nematode eggs, and occasionally from females of root-knot and cyst nematodes. In addition, it has frequently been detected in the rhizosphere of many crops. The species can grow at a wide range of temperatures – from 8 to 38 °C for a few isolates, with optimal growth in the range 26 to 30 °C. It also has a wide pH tolerance and can grow on a variety of substrates. P. lilacinum has shown promising results for use as a biocontrol agent to control the growth of destructive root-knot nematodes.

Andebbia is a fungal genus in the family Mesophelliaceae. The genus is monotypic, containing the single truffle-like species Andebbia pachythrix, found in Australia.

Nothocastoreum is a fungal genus in the Mesophelliaceae family. The genus is monotypic, containing the single truffle-like species Nothocastoreum cretaceum, found in Australia.

Byssocorticium is a genus of corticioid fungi in the family Atheliaceae. The widespread genus contains 9 species.

Byssoporia is a fungal genus in the family Albatrellaceae. The genus is monotypic, containing the single widespread corticioid species Byssoporia terrestris. There are several varieties: sartoryi, lilacinorosea, aurantiaca, sublutea, and parksii. These differ in bruising reaction, presence of clamp connections in the hyphae, or hyphal morphology. It was previously thought to belong in the Atheliaceae, but a molecular phylogenetics found it to belong in the Albatrellaceae.

Lyoathelia is a fungal genus in the family Atheliaceae. The genus is monotypic, containing the single corticioid (crust-like) species Lyoathelia laxa. Originally found in Canada, it is now known to occur as well in the United States and Japan.