National March on Washington for Lesbian and Gay Rights

The first National March on Washington for Lesbian and Gay Rights was a large political rally that took place in Washington, D.C. on October 14, 1979. The first such march on Washington, it drew between 75,000 and 125,000 [1] gay men, lesbians, bisexuals, transgender people, and straight allies to demand equal civil rights and urge the passage of protective civil rights legislation. [2] Lesbian activist, comic and producer, Robin Tyler, emceed the main stage at the march.

The next organization attempt was to occur in Minneapolis the weekend of November 17–19, 1978. [1] A steering committee was created to prepare for the Minneapolis conference, and it identified a primary goal of the march as transforming the gay movement from local to national. However, the committee was dissolved in October 1978 due to internal dissent. [4] Harvey Milk, who had been on the Minneapolis steering committee, took up the reins to continue march organization, and had secured support from local DC groups who had previously dissented before he was assassinated by Dan White. Milk's assassination served as a catalyst and a touchstone for organizers, who next planned a conference in Philadelphia February 23–25, 1979. One male and one female delegate was invited from known lesbian and gay organizations, and the attendees set forth to address three primary questions. First, whether or not a march should take place. Second, what the organizational structure of the march should be. And third, the platform of the march. [1] An initial debate between marching in 1979 and 1980 sprung up, but 1979 was settled upon as it fell on the ten-year anniversary of the Stonewall Riots. [1] Once these issues were settled and issues of female and minority representation were handled, the conference set forth five demands that would serve as the platform for the march. The participants chose to focus on single-issue politics so as not to dilute the message of a united lesbian and gay community. [1] The final organizational push occurred at a conference at the University of Houston campus July 6–8, 1979.[ citation needed ]

The National Steering Committee, with mandated gender parity and 25% representation of People of Color, was selected by community meetings throughout the country. Policy/Overview and Administrative Committees were established to guide the work and decisions between Steering Committee meetings. The National Office was set up in New York City with Joyce Hunter and Steven Ault as National Coordinators.[ citation needed ]

The march served to nationalize the gay movement, which had previously been focused on local struggles. [1] This spirit is invoked in the closing paragraph of the welcome program of the march, written by Allen Young.

"Today in the capital of America, we are all here, the almost liberated and the slightly repressed; the butch, the femme and everything in-between; the androgynous; the monogamous and the promiscuous; the masturbators and the fellators and the tribadists; men in dresses and women in neckties; those who bite and those who cuddle; celebates[sic] and pederasts; diesel dykes and nelly queens; amazons and size queens, Yellow, Black, Brown, White, and Red; the shorthaired and the long, the fat and the thin; the nude and the prude; the beauties and the beasts; the studs and the duds; the communes, the couples, and the singles; pubescents and the octogenarians. Yes, we are all here! We are everywhere! Welcome to the March on Washington for Lesbian and Gay Rights!" [5]

The march began at 4th Street and the National Mall, turned left onto Pennsylvania Avenue, proceeded northwest towards the White House, turned left onto 15th Street, right onto E Street, left onto 17th Street and ended in a rally between the Washington Monument and the Reflecting Pool. The march was led by the Salsa Soul Sisters, who carried the official march banner. It was also broadcast live on multiple National Public Radio affiliates throughout the US. Speakers and artists who spoke at the main rally included Harry Britt, Charlotte Bunch, Allen Ginsberg and Peter Orlovsky, Flo Kennedy, Morris Kight, Audre Lorde, Leonard Matlovich, Kate Millett, Troy Perry, Eleanor Smeal,First PFLAG President Adele Starr, and Congressman Ted Weiss. [5] Mayor Marion Barry gave a welcome to the marchers on behalf of the city of Washington, DC. [5] Activist, comic and producer, Robin Tyler, emceed and produced the main stage at the historic march. The author Alan Ginsberg read his poem, "Song," to the crowd. And Audre Lorde movingly declared from the stage, “Affirmation and work does not stop with this march on Washington. Each of us has a responsibility to take this struggle back to her and his community translated into daily action. Let us carry this solidarity that we are professing here today back with us into our everyday lives tomorrow and the day after and next week and next year. And let it be reflecting in a renewed commitment to a struggle for a future where we can all flourish, for not one of us will ever be free until we are all free.”

In addition to the march itself, the organizers arranged three days of workshops featuring artistic events, strategy sessions, focus groups on specific issues of women and minorities within the LGBT community, consciousness raising, local organization, religion and other issues. [5] The Monday after the march was organized as a "Constituent Lobbying Day" in which over 500 participants attempted to contact every member of Congress to express support for gay-rights legislation. The participants successfully met with fifty senators and more than 150 house members. [8]

Organizations supporting the march included Lambda Legal Defense Fund, the National Coalition of Black Lesbians and Gays, the National Gay Task Force (who had withheld their endorsement until only a month prior to the march), [1] and the National Organization for Women. [5]

Audre Lorde was an African-American writer, womanist, radical feminist, professor, and civil rights activist. She was a self-described "black, lesbian, mother, warrior, poet," who "dedicated both her life and her creative talent to confronting and addressing injustices of racism, sexism, classism, and homophobia." 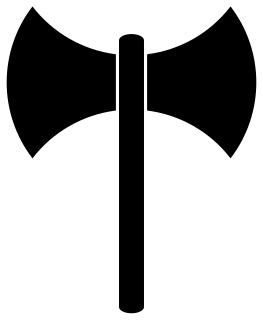 Lesbian feminism is a cultural movement and critical perspective that encourages women to focus their efforts, attentions, relationships, and activities towards their fellow women rather than men, and often advocates lesbianism as the logical result of feminism. Lesbian feminism was most influential in the 1970s and early 1980s, primarily in North America and Western Europe, and arose out of dissatisfaction with the New Left and the Campaign for Homosexual Equality.

LGBT History Month is an annual month-long observance of lesbian, gay, bisexual and transgender history, and the history of the gay rights and related civil rights movements. It was founded in 1994 by Missouri high-school history teacher Rodney Wilson. LGBT History Month provides role models, builds community, and represents a civil rights statement about the contributions of the LGBTQ+ community. As of 2022, LGBT History Month is a month-long celebration that is specific to Australia, Canada, Cuba, Finland, Germany, Hungary, Italy, United Kingdom and the US.

The National Coalition of Black Lesbians and Gays was the United States' first national organization for African American and Third World gay rights.

The Audre Lorde Project is a Brooklyn, New York-based organization for LGBT people of color. The organization concentrates on community organizing and radical nonviolent activism around progressive issues within New York City, especially relating to LGBT communities, AIDS and HIV activism, pro-immigrant activism, prison reform and organizing among youth of color. It is named for the lesbian-feminist poet and activist Audre Lorde and was founded in 1994. 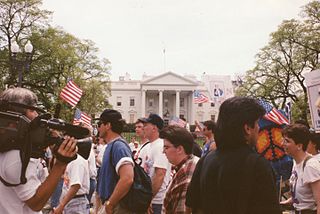 The March on Washington for Lesbian, Gay, and Bi Equal Rights and Liberation was a large political rally that took place in Washington, D.C., on April 25, 1993. Organizers estimated that 1,000,000 attended the March. The D.C. Police Department put the number between 800,000 and more than 1 million, making it one of the largest protests in American history. The National Park Service estimated attendance at 300,000, but their figure attracted so much negative attention that it shortly thereafter stopped issuing attendance estimates for similar events.

The Second National March on Washington for Lesbian and Gay Rights was a large political rally that took place in Washington, D.C., on October 11, 1987. Its success, size, scope, and historical importance have led to it being called, "The Great March". It marked the first national coverage of ACT UP, with AIDS activists prominent in the main march, as well as making headlines the next day during mass civil disobedience actions at the United States Supreme Court Building. 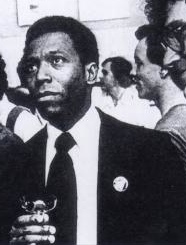 Melvin Boozer was a university professor and activist for African American, LGBT and HIV/AIDS issues. He was active in both the Democratic Party and Socialist Party USA.

Cathy J. Cohen is an American political scientist, author, feminist, and social activist, whose work has focused on the African-American experience in politics from a perspective which is underlined by intersectionality. She is currently the David and Mary Winton Green Professor in Political Science and the College at the University of Chicago, and is the former Director of the Center for the Study of Race (2002–05). 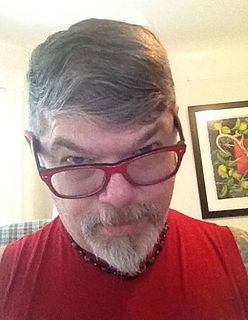 Jok Richard Church was an American cartoonist who created the Universal Press Syndicate syndicated comic strip You Can With Beakman and Jax, later adapted into the TV series Beakman's World. The series premiered September 18, 1992, on The Learning Channel (TLC) cable network and in national syndication. On September 18, 1993, it moved from national syndication to CBS Saturday morning children's lineup. At the peak of its popularity, it was seen in nearly 90 countries around the world.

The Gay Women's Alternative, DC (GWA) (1981–1993) was an incorporated social-educational non-profit organization dedicated to enriching the cultural, intellectual, and social lives of lesbians of the Washington, D.C., area. The GWA was formed in 1980 to provide the DC lesbian community with an alternative and safe space to socialize and discuss feminist and educational topics concerning the lesbian and gay women population. The group met every Wednesday evening from 8 pm to 11 pm at the Washington Ethical Society near Silver Spring, Maryland. Weekly programs covered topics such as, "Organizing Your Finances for Success," "Lesbian Couples: How Different are we?" and "Women and Wellness: A Feminist Approach to Health Care". Speakers included black poet Audre Lorde, artist Joan E. Biren, television journalist Maureen Bunyan, and comedian Kate Karsten. The GWA held several dances, including the annual lesbian spring dance and the Spring Cotillion.

Trans Day of Action (TDOA) began in 2005 and is an annual rally and march held in late June in New York City. It is organized by the Audre Lorde Project's Trans Justice group. It aims "to call attention to the continued violence, discrimination and institutionalization of our people [Trans and Gender Non-Conforming people], while simultaneously lifting up and celebrating our legacy of resilience, organizing, and community building." While addressing issues that disproportionately impact trans and gender non-conforming people, TDOA is also meant to honor and contribute to the broader "struggle for justice, liberation, and recognition for all oppressed people worldwide."

The following is a timeline of lesbian, gay, bisexual, transgender and queer (LGBTQ) journalism history.

Pat Norman was an American activist for women's rights, as well as the rights of the African American and LGBT communities.

This is a timeline of notable events in the history of non-heterosexual conforming people of African ancestry, who may identify as LGBTIQGNC, men who have sex with men, or related culturally specific identities. This timeline includes events both in Africa, the Americas and Europe and in the global African diaspora, as the histories are very deeply linked.