Nymph is a 1973 sexploitation film [1] directed by William Dear, in his feature film directorial debut. [2] 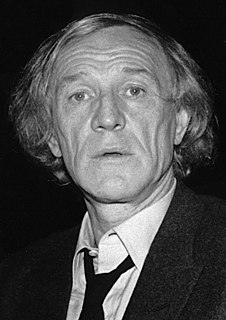 Richard John Harris was an Irish actor and singer. He appeared on stage and in many films, appearing as Frank Machin in This Sporting Life, for which he was nominated for the Academy Award for Best Actor, and King Arthur in the 1967 film Camelot, as well as the 1981 revival of the stage musical.

The year 1973 in film involved some significant events.

New Hollywood, sometimes referred to as the "American New Wave", or "The Hollywood Renaissance", refers to a movement in American film history from the mid-1960s to the early 1980s, when a new generation of young filmmakers came to prominence in the United States. They influenced the types of film produced, their production and marketing, and the way major studios approached film-making. In New Hollywood films, the film director, rather than the studio, took on a key authorial role. The definition of New Hollywood varies, depending on the author, with some defining it as a movement and others as a period. The span of the period is also a subject of debate, as well as its integrity, as some authors, such as Thomas Schatz, argue that the New Hollywood consists of several different movements. The films made in this movement are stylistically characterized in that their narrative often strongly deviated from classical norms. After the demise of the studio system and the rise of television, the commercial success of films was diminished.

Pamelyn Wanda Ferdin is an American animal rights activist and a former child actress. Ferdin's acting career was primarily during the 1960s and 1970s, though she appeared in projects sporadically in the 1980s and later years. She began her career in numerous television series, and gained renown for her work as a voice actress supplying the voice of Lucy Van Pelt in A Boy Named Charlie Brown (1969), as well as in two other Peanuts television specials.

William Dear is a Canadian film director, producer and screenwriter known for directing Harry and the Hendersons, If Looks Could Kill, Angels in the Outfield, Wild America and Santa Who?.

Valda Joanne Hansen was an American actress, known for her performances in a number of B-movies in the 1950s and 1970s.

Dear Rosie (1990) is a 1990 British short subject directed by Peter Cattaneo from a script by Peter Morgan and Mark Wadlow. The plot follows Rosie, played by Fiona Victory, an unsuccessful novelist who begins receiving letters from overweight people after her agent publishes her diet tips.

Leo Fong is a Chinese American actor, martial artist, boxer, and former Methodist minister who has been making films, acting, and directing since the early 1970s. His latest film role is in Challenge of Five Gauntlets which was released in 2018.

Frank Harris is an American film director, producer and cinematographer who has been working in films since the late 1970s. His work as a director includes Killpoint in 1984, Low Blow and The Patriot in 1986, If We Knew Then in 1987 and Lockdown in 1990. He is also a former television reporter.

Robert Stack Pierce was an actor who was previously a boxer and professional baseball player. His acting career began in the early 1970s with television roles in the series Arnie, Room 222, Mannix, Mission Impossible and later as Jake, the alien commander in the 1980s science fiction series V. His film roles include Night Call Nurses, Hammer, Cool Breeze, Low Blow and Weekend at Bernie's II.

Letterboxd is an online social networking service co-founded by Matthew Buchanan and Karl von Randow in 2011. It was launched as a social app focused on sharing opinions about, and love of, film, and is maintained by a small team in Auckland, New Zealand. The site is meant for sharing its members' tastes in films. Members can use it as a diary to record their opinions about films, keep track of films they have seen in the past, write reviews or make lists of films and showcase their favorite films, as well as meet and interact with other cinephiles. Films can be rated, reviewed, included in a list and tagged with relevant keywords.

Jennifer Bishop aka Jenifer Bishop is an American film and television actress who was active from the early 1960s through to the 1970s. She was a regular on the television series Hee Haw. She had various roles in film that include Blood of Dracula's Castle in 1969, The Female Bunch in 1969, Impulse in 1974, and Mako: The Jaws of Death in 1976.

House of Terror is a suspense film involving deception and a murder plot. It was directed by Sergei Goncharoff, and which starred Jennifer Bishop, Arell Blanton, Jacquelyn Hyde and William Kerwin. It was nominated in 1973 for a Saturn Award for Best Horror Film.

Dear White People is an American comedy-drama television series on Netflix that follows several black college students at an Ivy League institution, touching on issues surrounding modern American race relations. It is based on the 2014 film of the same name. The film's writer and director, Justin Simien, returned to write and direct episodes of the series. This series stars Logan Browning, Brandon P. Bell, DeRon Horton and Antoinette Robertson. Each episode focuses on a particular character, except for the finale. Netflix ordered ten 30-minute episodes and the first season was released on April 28, 2017. On June 30, 2017, Netflix renewed the series for a second season which premiered on May 4, 2018. On June 21, 2018, the series was renewed for a third season which was released on August 2, 2019. On October 2, 2019, the series was renewed for its fourth and final season, set to premiere in 2020.

Poor Cecily is a 1974 American drama and adult film directed and produced by Lee Frost. This film has been music directed by Leland Sythe. The film stars Angela Field, William Quinn, Sandy Dempsey and Cindy Summers in the lead roles.