Northville Cemetery Massacre is a 1976 outlaw biker film written and directed by William Dear and Thomas L. Dyke. Nick Nolte did an uncredited voice over for the film's lead actor, David Hyry. [1]

An outlaw motorcycle club commits illegal acts, but only to make a point against police corruption. They are normally law-abiding, even going so far as to help an elderly couple whose car stops running. When a police officer rapes a woman, he frames the crime on the bikers. The town's citizens attack the gang in revenge, leading to a battle. [1]

William Dear asked Michael Nesmith to compose the film's music and Nesmith agreed. The film's crew was unable to pay him, but he composed the music for free. [2] The author Steven Puchalski referred to the film as the "perfect funeral wreath to the biker movie phenomenon". [3] It was filmed using 16 mm film. [1]

Bill Gibron, writing for DVD Verdict, said, "amid all its gory, blood-soaked brazenness, there's a message about personal and public perspective that is awfully hard to miss". [1] Scott Weinberg, of DVD Talk, said, "Highly recommended to anyone who's old enough to remember and appreciate this type of low-budget, down & dirty, occasionally terrible but entirely watchable genre fare." [4]

A TV Guide review said, "Unimaginatively directed and too bloody for words". [5]

The film was released on VHS under Northville Cemetery Massacre, as well as Freedom R.I.P. and Harley's Angels. [2] It was released on DVD in 2006 with three commentaries, behind the scenes pictures, previous film posters, three film trailers, and biographies. The DVD is the 30th Anniversary Director's Cut. [1] [4]

Snuff is a 1976 American splatter film directed by Michael Findlay and Horacio Fredriksson. It is most notorious for being marketed as if it were an actual snuff film. This picture contributed to the urban legend of snuff films, although the concept did not originate with it.

Timerider: The Adventure of Lyle Swann is a 1982 action film directed by William Dear and starring Fred Ward as Lyle Swann, a cross country dirt bike racer. The film was scored, produced and co-written by Michael Nesmith.

Horror is a 2002 American horror film written and directed by Dante Tomaselli. The movie stars Danny Lopes as the leader of a gang of drug addicts that have made a bloody escape from a drug rehabilitation hospital, only to encounter demonic entities.

Alien Dead is an American horror film directed by Fred Olen Ray. Ray co-wrote the script with Martin Nicholas. The film involves a meteor hitting a houseboat, which causes the people on board to become zombies who eat alligators and eventually people. 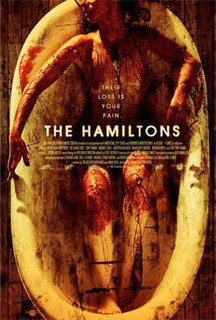 The Hamiltons is an independent 2006 horror film directed by the Butcher Brothers. Cory Knauf stars as a teenager who must decide whether to help the victims that his older siblings have kidnapped.

Nightbeast is a 1982 science fiction horror film directed by cult director Don Dohler. It is a remake and sequel of sorts to Dohler's first film The Alien Factor. The story concerns a small town sheriff who must stop a rampaging alien from killing the residents of Perry Hall, Maryland.

La orgía de los muertos a.k.a. The Hanging Woman, Beyond the Living Dead, Return of the Zombies and Terror of the Living Dead, is a 1973 horror film directed by José Luis Merino, starring Paul Naschy and Dyanik Zurakowska, and distributed by Troma Entertainment.

Sole Survivor is a 1984 American horror film written and directed by Thom Eberhardt, in his feature film debut.

Laid to Rest is a 2009 American slasher film written and directed by Robert Green Hall. It was followed by a 2011 sequel entitled ChromeSkull: Laid to Rest 2.

Beneath Still Waters is a 2005 horror film directed by Brian Yuzna. It stars Michael McKell, Raquel Meroño and Charlotte Salt. It was based on a novel by Matthew Costello.

Dr. Hackenstein is a 1988 comedy horror film written and directed by Richard Clark and distributed by Troma Entertainment. After the death of his wife, Dr. Hackenstein concocts the perfect plan: with the help of a few graverobbers and a couple of lost girls, he can use the spare parts to reanimate his dead spouse and build a better woman.

The Flesh and Blood Show is a 1972 British horror film directed by Pete Walker. It stars Ray Brooks, Jenny Hanley and Luan Peters. 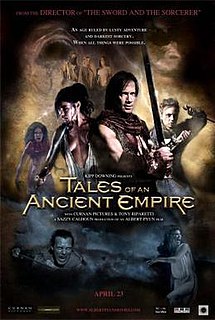 Tales of an Ancient Empire is a 2010 American fantasy-sword and sorcery film directed by Albert Pyun and starring Kevin Sorbo, Michael Paré, Whitney Able, Melissa Ordway, Ralf Moeller, Lee Horsley and Victoria Maurette. It is a sequel to Pyun's directorial debut, The Sword and the Sorcerer.

Chained is a 2012 Canadian psychological horror film directed by Jennifer Lynch and based on a screenplay by Damian O'Donnell. Starring Vincent D'Onofrio as a serial killer and Eamon Farren as a young prisoner of the killer, it explores their relationship as the killer seeks to turn his captive into his protégé. Gina Philips, Conor Leslie, Jake Weber, and Julia Ormond appear in supporting roles. 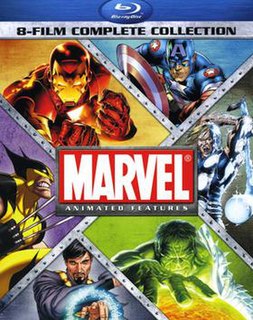 Killer Nerd is a 1991 comedy horror film. It was directed by Mark Steven Bosko and Wayne Alan Harold and stars Toby Radloff in his first film.

Joe Egender, is an American actor, producer, and screenwriter. He is best known for his collaborations with The Butcher Brothers, Holy Ghost People, and his television roles.