Last updated July 22, 2021
This article is about the 2009 American drama film. For other uses, see Perfect game (disambiguation).
2009 American film

The Perfect Game is a 2009 American drama film directed by William Dear, based on the 2008 book of the same name written by W. William Winokur. [1] The film is based on the events leading to the 1957 Little League World Series, which was won by the first team from outside the United States, the Industrial Little League of Monterrey, Mexico, who defeated the heavily favored U.S. team. [2] Mexican pitcher Ángel Macías threw the first, and so far only, perfect game in championship game history.

César Faz (Clifton Collins Jr.), moves to Monterrey, Mexico, after he is let go by the St. Louis Cardinals from his job as a clubhouse attendant. There he meets local children being led by Padre Esteban (Cheech Marin), enjoying baseball; he takes pitcher Ángel Macías (Jake T. Austin), under his wing and brags about his own pitching skills and how he used to coach the Cardinals. Ángel convinces César to help recruit and coach Monterrey's first-ever Little League team. With César's skills and Padre Esteban's support, the boys hone themselves into a competitive team worthy of international competition. At the final game of the World Series of Little League, Monterrey defeated the team of West La Mesa, California, 4–0. Enrique Suárez (Jansen Panettiere), hit a grand slam home run, and Ángel Macías pitched a perfect game, a feat that has not since been repeated in Little League World Series history.

When the team arrives in the United States, they are met with racism, a language barrier, and visa troubles. Though the underdogs, the team scores a series of victories that endear them to the media, and new fans. They befriend a sports reporter, Frankie (Emilie de Ravin), and the groundskeeper, Cool Papa Bell (Louis Gossett Jr.), who then assist the boys in reaching the final game.

The Industriales won all qualifying tournaments, to many rather unexpectedly, and advanced to the Little League World Series as the first Mexican team. There, they made it to the finals and defeated the highly favored team from La Mesa, California by a score of 4–0. The pitcher from Monterrey, Angel Macías, threw the first and only perfect game in championship history. [3] The Industriales de Monterrey little league team was so dominant that year, that they were able to repeat their success in the following year in the 1958 Little League World Series.

The film scenes in Monterrey, which is the leading industrial center, one of the largest Mexican cities for over 100 years and a major center for science and research in Mexico, depicted the city as a two-burro village where the children played ball in the dirt choked streets with pigs and chickens serving as bases. The border between Mexico and Texas was portrayed as an out-in-the-middle-of-nowhere border crossing along a dirt road, instead of a bridge border-crossing over the Rio Grande. The digital work to recreate the separate looks for the United States and Monterrey in 1957 was done by Post Logic Studios. [4]

The film has received mixed reviews. Patrick Goldstein of the Los Angeles Times said he felt that "the film did a nice job of telling the story of the surprise upset when a youth ball team from Monterrey, Mexico, won the 1957 Little League World Series." He also commented that, "although the story seems like a fable, it reflected true events." He further expressed concern over Lionsgate's suspending the original release date. [5] Ben Apatoff of MLB.com felt that the film was a strong family movie that appeals to baseball history buffs or any person who could relate to a child in love with the game. [1] Roger Ebert wrote: "You sort of know how these underdog sports movies turn out. Doesn't matter. The Perfect Game so expertly uses the charisma and personalities of the actors, especially the young ones, that it's thrilling anyway." [6]

A. O. Scott of At the Movies said, "[From] the second minute of the movie I knew every single thing that was going to happen and there was not a single surprise." [7] Michael Phillips of the Chicago Tribune wrote, "The movie feels fraudulent, whether it's sticking to the historical record or going its own way with the customary composites and revisions and fabrications." [8] The film ranking website Rotten Tomatoes reports that 57% of critics have given The Perfect Game positive reviews, based upon a sample of 44. [9]

The film screened at the 2009 Guadalajara International Film Festival, [10] with Eva Longoria invited to the preview. [11] Louis Gossett Jr. was also in attendance for the premiere. [12] The film was originally to be released in theaters on August 8, 2008, but it was bumped from that date, [5] which Lionsgate said was due to marketing monies another party pledged but did not deliver. [13]

A perfect game in Major League Baseball is a game by a pitcher that lasts a minimum of nine innings with no batter reaching first base. To achieve a perfect game, a team must not allow any opposing player to reach base by any means: no hits, walks, hit batsmen, uncaught third strikes, catcher's or fielder's interference, or fielding errors; in short, "27 up, 27 down". The feat has been achieved 23 times in MLB history – 21 times since the modern era began in 1901, most recently by Félix Hernández of the Seattle Mariners on August 15, 2012. A perfect game, by definition, is also a no-hitter. Until a rule change in 2020, a perfect game was also necessarily a win and a shutout. A fielding error that does not allow a batter to reach base, such as a misplayed foul ball, does not spoil a perfect game. Weather-shortened contests in which a team has no baserunners and games in which a team reaches first base only in extra innings do not qualify as perfect games.

Alphonse Dante Bichette Sr. is an American former professional baseball player and currently employed by the Toronto Blue Jays organization. He played in Major League Baseball (MLB) as an outfielder for the California Angels (1988–1990), Milwaukee Brewers (1991–1992), Colorado Rockies (1993–1999), Cincinnati Reds (2000), and Boston Red Sox (2000–2001). He was also the hitting coach for the Rockies in 2013. He batted and threw right-handed.

Little League Baseball and Softball is a 501(c)(3) nonprofit organization based in South Williamsport, Pennsylvania, United States, that organizes local youth baseball and softball leagues throughout the United States and the rest of the world.

The Little League Baseball World Series is an annual baseball tournament in the Eastern United States, held in Williamsport, Pennsylvania for children – typically boys – aged 10 to 12 years old. Originally called the National Little League Tournament, it was later renamed for the World Series in Major League Baseball. The Series was first held in 1947 and is held every August in South Williamsport, Pennsylvania. 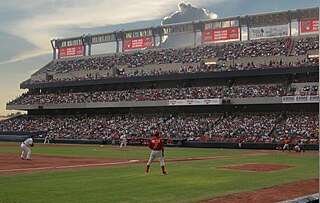 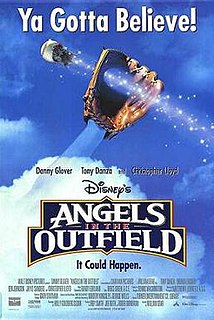 Little Big League is a 1994 American family sports film about a 12-year-old who suddenly becomes the owner and then manager of the Minnesota Twins baseball team. It stars Luke Edwards, Timothy Busfield, and Dennis Farina. The film is director Andrew Scheinman's first and only feature film directorial project. 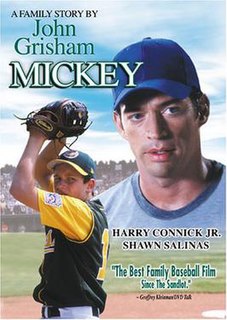 Clifton Craig Collins Jr. is an American actor. After starting in 1990, with small roles in film and on television, Collins gained attention for his performance as Cpl. Ramon Aguilar, a prisoner "serving" under an imprisoned general played by Robert Redford in the 2001 film The Last Castle. His extensive work includes featured roles in films such as One Eight Seven (1997), Traffic (2000), Capote (2005), Star Trek (2009) and Pacific Rim (2013). Collins extensive work on television series includes Crisis Center (1997), Thief (2006), which earned him a Primetime Emmy Award nomination, The Event (2010–2011), and Westworld (2016–2020).

Jansen Rayne Panettiere is an American actor. He is known for his roles in films The Perfect Game, Ice Age: The Meltdown, The Martial Arts Kid and How High 2. His elder sister is actress Hayden Panettiere.

Saw is a splatter film franchise created by Australian film makers James Wan and Leigh Whannell. It consists of nine feature films and additional media. The first eight films primarily revolve around serial killer John Kramer, also called the "Jigsaw Killer" or simply "Jigsaw". He was introduced briefly in Saw and developed in more detail in Saw II and the subsequent films. Rather than killing his victims outright, Kramer traps them in situations that he calls "tests" or "games" to test their will to live through physical or psychological torture and believes that if they survive, they will be "rehabilitated". Despite the fact that Kramer was murdered in Saw III, the films continue to focus on the posthumous influence of the Jigsaw Killer and his apprentices by exploring his character via flashbacks.

Juan Carlos Cacho Gutierréz is a Mexican former professional footballer who played as a forward. 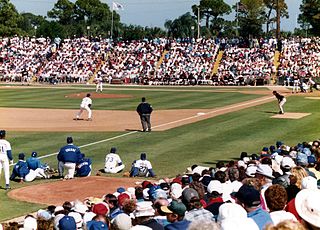 In Major League Baseball (MLB), spring training is a series of practices and exhibition games preceding the start of the regular season. Spring training allows new players to try out for roster and position spots, and gives established players practice time prior to competitive play. Spring training has always attracted fan attention, drawing crowds who travel to the warm climates of Arizona and Florida to enjoy the weather and watch their favorite teams play, and spring training usually coincides with spring break for many US students.

Mexico participated in the Little League World Series as part of the Latin America Region from 1957 to 2000. In 2001, when the LLWS expanded to sixteen teams, the Mexico Region was created, so that each year the Mexico Little League championship team has an automatic berth in the World Series. The country currently has about 450 active leagues, making it the third-largest country in Little League participation. Eastbound & Down is an American sports comedy television series that was broadcast on HBO, created by Ben Best, Jody Hill, and Danny McBride. It stars McBride as Kenny Powers, a former professional baseball pitcher who, after a career downturn in the major leagues, is forced to return to his hometown middle-school in Shelby, North Carolina, as a substitute physical education teacher.