As early as the beginning of the 1990s Olga Kisseleva became, thanks to an invitation by the Fulbright Foundation, part of a team of creators working on the development of numerical technologies in the United States. She primarily stays at Columbia University and University of California, where she participates in the adventure of the first start-ups of the Silicon Valley.

Olga Kisseleva teaches New media art and Art&Science in the Université Paris 1 Panthéon-Sorbonne. From 2007 to 2009 she was a member of the High Scientific Committee of Sorbonne.

The work of Olga Kisseleva constantly interweaves actions that reveal themselves in the urban environments or in network with interventions in galleries and museums. For the 5th Dakar Contemporary Art Biennial, she presented « Une Voyante m’a dit... », an alarming method, where the artiste publicly exchanges her look with different participants to symbolically endorse their identity and see the world through their eyes. « Where are you? » places the phenomenon of the teleobjectivity to the centre of the project while proposing an immersion within reality, in environments that truly raise the imagination. Leaving one collects photographs accumulated during their peregrinations through the world; the artiste makes obvious the impressive gaps to which one attends in all contemporary megalopolis. Rewarded by the International Prize ProArte (Russia), Olga Kisseleva works in collaboration with The Academy of Sciences « Hybrid Space », a body of twelve interactive installations, a perilous game, that explores the capacity of the spectator to reveal the presence of a border, that separates reality and the imagination. [2]

Ugo Nespolo is an Italian painter and sculptor, particularly known for his experimental films, his applied arts works and his artistic collaborations in advertising, theatre and literature.

Claude Closky is a French contemporary artist that lives and works in Paris, France.

The Moscow Biennale of Contemporary Art is one of the most important Russian cultural events and was founded in 2003.

Leonid Sokov was a Russian nonconformist artist and sculptor. He primarily lived and worked in New York City.

Xavier Veilhan (1963) is a French artist who lives and works in Paris. His work includes photography, sculpture, film, painting and installation art. 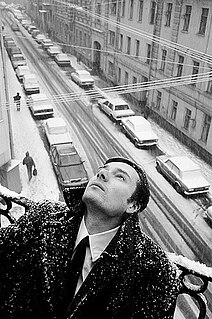 Elena Mirolioubova is a French artist.

Alexander Ponomarev is a multidisciplinary contemporary visual artist. He was awarded the Ordre des Arts et des Lettres by the French Ministry of Culture "for merits in literature and art" in 2008.

Melik Ohanian is a French contemporary artist of Armenian origin. He lives and works in Paris and New York. His work has been shown in many solo exhibitions including: Galerie Chantal Crousel, Centre Pompidou and Palais de Tokyo in Paris, South London Gallery in London, De Appel in Amsterdam, IAC in Villeurbanne, Yvon Lambert in New York, Museum in Progress in Vienna, and Matucana 100 in Santiago de Chile...

Pavel Pepperstein is a Russian artist and writer.

Hervé Fischer, artist-philosopher and sociologist. He graduated from the École Normale Supérieure and defended his Master's thesis on Spinoza's political philosophy with Raymond Aron and devoted his main research to the sociology of colour. For many years he taught the sociology of communication and culture at the Sorbonne, where he was promoted to master lecturer in 1981. At the same time, he developed a career as a multi-media artist and creator of "sociological art" (1971) and initiated many public participation projects with radio, television, and print media in many European and Latin American countries before coming to Quebec. He speaks fluently French, English, German and Spanish.

Jean-Hubert Martin born on June 3, 1944 in Strasbourg, France, is a leading art historian, institution director, and curator of international exhibitions. Through his professional career, he contributed to expand what is considered as contemporary art as well as create a dialogue between different cultures and ethnic groups.

Olya Kroytor, full name Olga Igorevna Kroytor, is a Russian contemporary artist, based in Moscow. She works in the mediums of painting, collage, installation, sculpture, image manipulation and performance. She is particularly renowned for her performance pieces, receiving the Kandinsky Prize in 2015 in the category of 'Young artist: Project of the Year'.

Olga Lvovna Sviblova is a Russian curator, film director, and arts administrator. In 1996, she founded the Moscow House of Photography, which later became the Multimedia Art Museum, Moscow; she has been a director there since the institution's establishment.

Taus Makhacheva is a Russian artist based in Moscow. She is the granddaughter of Rasul Gamzatov – Avar poet, author, journalist and political activist. Taus Makhacheva included in the list of the Best contemporary Russian artists (ARTEEX), and also in the Russian Investment Art Rating 49ART.

Olga Lomaka is a Russian gallerist, contemporary artist and curator. Her style is known for working primarily within the pop-art movement, combining diverse materials and techniques in her pieces. Lomaka is actively exhibiting worldwide, participating in global art-fairs and biennales. She was named the Best Artist of the Year and won The Annual Award at the Aurora European Awards in Moscow in 2014. She was also awarded the title Fashion Artist of the Year by the Fashion TV Channel in Moscow in 2013.

Enrique Ramírez is a Chilean artist born in 1979 in Santiago de Chile.