Olivier Roumat (born 16 June 1966 in Mont-de-Marsan) is a former French rugby union footballer. He played as a number-eight, openside flanker and lock.

Villeneuve-de-Marsan is a commune in the Landes department in Nouvelle-Aquitaine in southwestern France.

Union sportive dacquoise, also known as US Dax, is a French rugby union club currently playing in Rugby Pro D2, the second level of the French league system. In the coming 2018-2019 season, they will play in third-level Fédérale 1.

The Sharks are a South African rugby union team that participates in the annual Currie Cup tournament. The Sharks' home stadium is Kings Park Stadium. They draw most of their players from the KwaZulu-Natal Province. The Sharks are the current representative team of the Natal Rugby Union, founded in 1890. The team is the fourth most successful provincial union in the country, having won the Currie Cup title eight times.

Roumat won 61 caps for France, from 1989 to 1996, scoring 5 tries, 23 points in aggregate. He captained the national team on 8 occasions, from 1993 to 1994. He played for France at the 1991 Rugby World Cup, in five matches, scoring a try. France was knocked out of that World Cup by England (the eventual losing finalist) at the quarter final stage. Roumat also represented France at the 1995 Rugby World Cup, appearing once again in five matches and scoring another try. This time France would finish the tournament in 3rd place, triumphing over England in the 3rd/4th place playoff after both teams were defeated at the semi final stage. Roumat played in the Five Nations, in 1991, 1992, 1993, 1994, 1995 and 1996. He was a member of the Championship winning team in 1993.

Stade Toulousain, also referred to as Toulouse, is a French rugby union club from Toulouse in Occitania. Toulouse is one of the most successful clubs in Europe, having won the Heineken Cup a joint record four times – in 1996, 2003, 2005 and 2010. They were also runners-up in 2004 and 2008 against London Wasps and Munster, respectively. Stade Toulousain have also won a record 19 French Championship titles. It is traditionally one of the main providers for the French national team. Their home ground is the Stade Ernest-Wallon. However, big Top 14 matches along with Heineken Cup games are often played at the Stadium Municipal de Toulouse. The club colours are red, black and white. 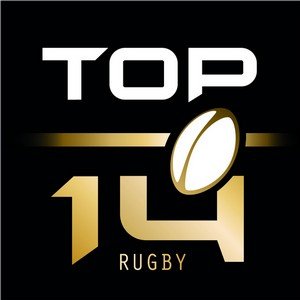 The Top 14 is a professional rugby union club competition that is played in France created in 1892. The Top 14 is at the top of the national league system operated by the French National Rugby League, also known by its French initialism of LNR. There is promotion and relegation between the Top 14 and the next level down, the Rugby Pro D2. The fourteen best rugby teams in France participate in the competition, hence the name Top 14. The competition was previously known as the Top 16.

Stade Français Paris is a French professional rugby union club based in the 16th arrondissement of Paris. The club plays in the Top 14 domestic league in France and is one of the most successful French clubs of the modern era. Stade Français was founded in 1883. It was founded in its current form in 1995 with the merger of the rugby sections of the Stade Français and Club Athlétique des Sports Généraux (CASG). 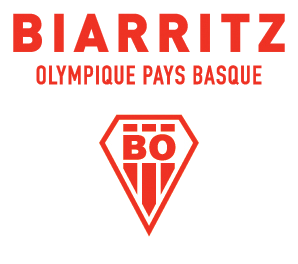 Biarritz Olympique Pays Basque, usually known simply as Biarritz, is a French professional rugby union team based in the Basque city of Biarritz, New Aquitaine which competes in the Rugby Pro D2, the second division of French rugby. Biarritz plays its home matches at the Parc des Sports Aguiléra, which is a multi-use stadium in Biarritz and which has a capacity of around 13,500 people, though for games that need a larger capacity, Biarritz may play at the Estadio Anoeta in San Sebastián. Biarritz play in red and white colours. Biarritz won a number of major honors, including the French championship on five occasions.

Fabien Galthié is a French rugby union coach and former player, currently head coach of Toulon. His usual position was at scrum-half. He played much of his club rugby for Colomiers, and later on in his career, Stade Français. Galthié won 64 caps for France, including four Rugby World Cup appearances, as well as captaining the side at the 2003 World Cup. Former France national coach Bernard Laporte has described him as the greatest scrum-half in French history. He was the IRB International Player of the Year in 2002.

Thierry Lacroix is a former French rugby union footballer. He won 43 caps playing at fly-half for the French rugby union side. He made his international test debut in Strasbourg at the age of 22 on 4 November 1989, coming on as a replacement for the injured Didier Camberabero against Australia. He was part of the winning side at the 1993 Five Nations Championship. He won his final cap for France on 22 November 1997 against South Africa. Lacroix played in the 1991 Rugby World Cup - a tournament in which the French team was beaten in the quarter final stage by the eventual losing finalist, England - and again in the 1995 Rugby World Cup in which he was the top points scorer with 112 points. France finished the 1995 tournament in 3rd place, defeating a fellow losing semi finalist, England, in the 3rd / 4th place playoff game. 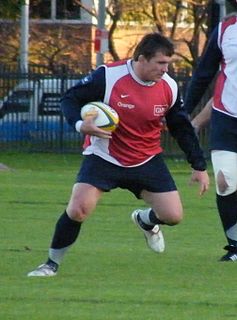 Rémy Martin is a French rugby union footballer. He has also played for France. His usual position is at flanker.

Julien Saubade is a French rugby union footballer, currently playing for the Paris rugby club Racing Métro in the top level of French club rugby, the Top 14. His usual position is on the wing.

Benoît August is a French rugby union footballer, currently playing for Biarritz Olympique in the top division of French rugby, the Top 14. His usual position is at hooker. Prior to joining Biarritz he played for US Dax and Stade Français Paris. He was selected in the French national team's squad for the 2007 Six Nations, making his debut in the Test against Wales. That is still his only cap for his National Team.

The 2008–09 Top 14 Competition was a French domestic rugby union club competition operated by the Ligue Nationale de Rugby (LNR). It ran from late August 2008 through the final at Stade de France on June 6, 2009, in which Perpignan lifted the Bouclier de Brennus with a 22–13 win over Clermont.

The 1993 France rugby union tour of South Africa was a series of eight matches played by the France national rugby union team in South Africa in June and July 1993. The French team won four matches, drew two and lost two. They won their two match international series against the South Africa national rugby union team, drawing the first game and winning the second for a one-nil series victory. The tour was marred by a serious facial injury suffered by the captain, Jean-François Tordo, who was raked by Garry Pagel in the match against Western Province. Tordo required 50 stitches and plastic surgery and took no further part in the tour.

The 2009–10 Top 14 competition was a French domestic rugby union club competition operated by the Ligue Nationale de Rugby (LNR). It began on August 14, 2009 with a match between Toulon and Stade Français at Stade Mayol in Toulon, and continued through to the final at the Stade de France on May 29, 2010.

Jean-Michel Gonzalez, nicknamed Gonzo, is a former French rugby union footballer and a current coach. He played as a hooker and as a prop.

Patrice Lagisquet is a former French rugby union footballer and a current coach. He played as a wing. He was nicknamed "The Bayonne Express".

Philippe Gimbert is a former French rugby union player and coach. He played as a prop.

The 1925-26 French Rugby Union Championship was won by the club of Toulouse that defeated the US Perpignan.

The 1930-31 French Rugby Union Championship of first division was won by le Toulon that defeated Lyon OU in the final.

Teddy Thomas is a French international rugby union player who plays on the wing for Racing 92 in the Top 14.