The Online Etymology Dictionary is a free online dictionary, written and compiled by Douglas R. Harper, that describes the origins of English-language words. [1]

Douglas Harper, an American Civil War historian and copy editor for LNP Media Group, [2] [3] compiled the etymology dictionary to record the history and evolution of more than 50,000 words, including slang and technical terms. [4] The core body of its etymology information stems from The Barnhart Dictionary of Etymology by Robert Barnhart, Ernest Klein's Comprehensive Etymology Dictionary of the English Language, The Middle English Compendium, The Oxford English Dictionary , and the 1889-1902 Century Dictionary . [5] Harper also researches on digital archives. On the Etymonline homepage, Harper says that he considers himself "essentially and for the most part" a compiler and evaluator of etymology research made by others.

The Online Etymology Dictionary has been referenced by Oxford University's "Arts and Humanities Community Resource" catalog as "an excellent tool for those seeking the origins of words" [6] and cited in the Chicago Tribune as one of the "best resources for finding just the right word". [7] It is cited in academic work as a useful, though not definitive, reference for etymology. [8] [9] [10] In addition, it has been used as a data source for quantitative scholarly research. [11] [12]

Gibberish, also called jibber-jabber or gobbledygook, is speech that is nonsense. It may include speech sounds that are not actual words, or language games and specialized jargon that seems nonsensical to outsiders. 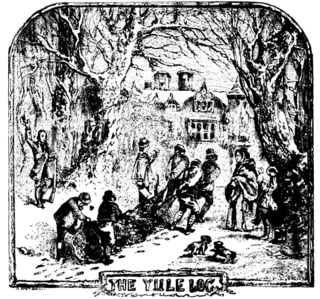 Yule is a festival historically observed by the Germanic peoples. Scholars have connected the original celebrations of Yule to the Wild Hunt, the god Odin, and the pagan Anglo-Saxon Mōdraniht. 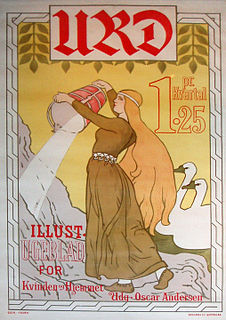 Wyrd is a concept in Anglo-Saxon culture roughly corresponding to fate or personal destiny. The word is ancestral to Modern English weird, which retains its original meaning only dialectically.

Chinglish is slang for spoken or written English language that is either influenced by a Chinese language, or is poorly translated. In Hong Kong, Macau, Guangdong and Guangxi, the term "Chinglish" refers mainly to Cantonese-influenced English. This term is commonly applied to ungrammatical or nonsensical English in Chinese contexts, and may have pejorative or deprecating connotations. Other terms used to describe the phenomenon include "Chinese English", "China English", "Engrish" and "Sinicized English". The degree to which a Chinese variety of English exists or can be considered legitimate is still up for debate.

Yo is a slang interjection, commonly associated with North American English. It was popularized by the Italian-American community in Philadelphia, Pennsylvania, in the 1940s.

A teat is the projection from the mammary glands of mammals from which milk flows or is ejected for the purpose of feeding young. In many mammals the teat projects from the udder. The number of teats vary by mammalian species and often corresponds to the size of an average litter for that animal. In some cases, the teats of female animals are milked for the purpose of human consumption.

In grammar, an adverbial genitive is a noun declined in the genitive case that functions as an adverb.