Open Heart Symphony is a 1996 album by Spirit of the West, in collaboration with the Vancouver Symphony Orchestra.

The band recorded two shows with the orchestra on May 12 and May 13, 1995, at the Orpheum Theatre. [2] The shows included several renditions of the band's best known songs, and an entire album's worth of songs written specifically for the symphony shows. The new songs were compiled on the album Open Heart Symphony; several of the hits performed at the shows appear on the band's 1999 compilation Hit Parade .

The shows were also taped for broadcast on the Canadian arts channel Bravo!.

A studio version of "Kiss and Tell" appeared on the 1997 soundtrack album to the film The Hanging Garden , and a previously unreleased demo version was released on the band's 2008 compilation album Spirituality 1983–2008: The Consummate Compendium .

"Let the Ass Bray" was reportedly written after Mann and Kelly attended a Radiohead concert at which Thom Yorke angrily refused an audience member's request to play "Creep" even though it was Radiohead's only notable hit single at the time.

The photo used on the album cover was taken in the "Confederation Lounge" at the Hotel Macdonald in Edmonton, Alberta. The large painting hanging above the band members' heads is a reproduction by Frederick Challener of the famous "Fathers of Confederation" portrait originally painted by Robert Harris. As the original Harris painting was lost in the Parliament fire of 1916, this reproduction is one of only two versions depicting an historic event in Canadian history. [3]

The album was reissued in 2008 on Rhino Records, concurrently with the release of the band's career retrospective Spirituality 1983-2008: The Consummate Compendium.

All songs by John Mann and Geoffrey Kelly, except where noted.

The 10th Annual Grammy Awards were held on February 29, 1968, at Chicago, Los Angeles, Nashville and New York. They recognized accomplishments of musicians for the year 1967.

A cover band is a band that plays songs recorded by someone else, sometimes mimicking the original as accurately as possible, and sometimes re-interpreting or changing the original. These remade songs are known as cover songs. New or unknown bands often find the format marketable for smaller venues, such as pubs, clubs or parks. The bands also perform at private events, for example, weddings and birthday parties, and may be known as a wedding band, party band, function band or band-for-hire. A band whose covers consist mainly of songs that were chart hits is often called a top 40 band. Some bands, however, start as cover bands, then grow to perform original material. For example, The Rolling Stones released three albums consisting primarily of covers before recording one with their own original material. 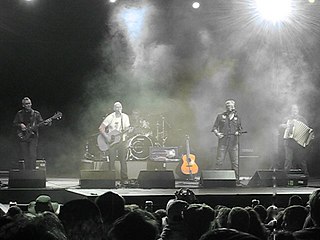 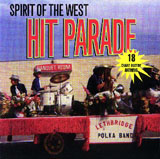 Hit Parade is the second compilation album by Canadian folk rock group Spirit of the West, released on September 14, 1999 by Warner Music Canada. 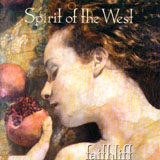 Faithlift is a 1993 album by Canadian band Spirit of the West.

The James Bond film series from Eon Productions features numerous musical compositions since its inception in 1962, many of which are now considered classic pieces of British film music. The best known of these pieces is the "James Bond Theme" by Monty Norman. Other instrumentals, such as "On Her Majesty's Secret Service", and various songs performed by several notable British or American artists, such as Shirley Bassey's "Goldfinger", Nancy Sinatra's "You Only Live Twice", Paul McCartney's "Live and Let Die", Carly Simon's "Nobody Does It Better", Sheena Easton's "For Your Eyes Only", Duran Duran's "A View to a Kill", Tina Turner's "Goldeneye" also become identified with the series and Madonna's "Die Another Day", a dance hit around the world. Three Bond songs have won the Academy Award for Best Original Song: "Skyfall" by Adele, "Writing's on the Wall" by Sam Smith and "No Time to Die" by Billie Eilish, with Writing's on the Wall also becoming the first Bond theme to reach number one on the UK music charts.

"Political" is a song written by John Mann and recorded by Canadian folk rock group Spirit of the West. One of the band's most famous songs, it originally released in 1988 as the lead single from their second studio album Labour Day. While it failed to chart as a single in 1988, it was re-recorded and released in October 1991 as the second single from their fifth studio album Go Figure, peaking at number 70 in Canada in November 1991. 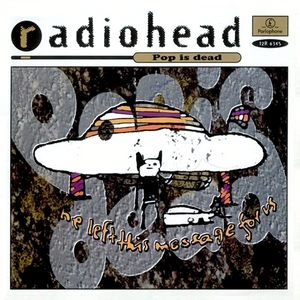 "Pop Is Dead" is a song by the British alternative rock band Radiohead. It was released as a non-album single on 10 May 1993, several months after their debut album Pablo Honey. It reached number 42 on the UK Singles Chart. It was included in the 2009 Pablo Honey reissue. 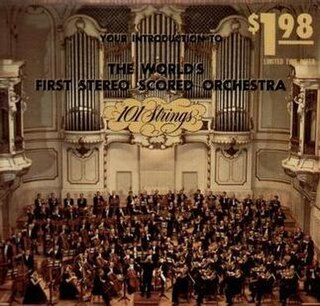 101 Strings Orchestra was a brand for a highly successful easy listening symphonic music organization, with a discography exceeding 150 albums and a creative lifetime of around 30 years beginning in 1957. 101 Strings had a trademark sound, focusing on melody with a laid-back ambiance most often featuring strings. Their LPs were individualized by the slogan "The Sound of Magnificence", a puffy cloud logo and sepia-toned photo of the orchestra. The 101 Strings orchestra included 124 string instruments, and was conducted by Wilhelm Stephan. The orchestra's famous official photograph was taken in the Musikhalle Hamburg.

"Goin' Blind" is a ballad by American hard rock band Kiss, written by Gene Simmons and Stephen Coronel; it is sometimes referred to as "Going Blind". The song originally appeared on the band's second album, 1974's Hotter Than Hell. The original working title for the song was "Little Lady". 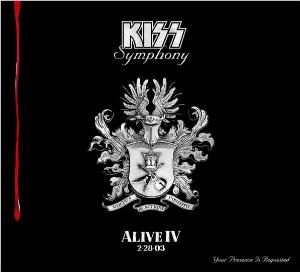 Kiss Symphony: Alive IV is a 2003 live album from the American rock band, Kiss, performing with the Melbourne Symphony Orchestra (MSO). The arrangements were made by David Campbell, who also conducted the MSO. It is the group's fourth album in the Alive series and first release under Kiss Records and Sanctuary Records.

"Black Diamond" is a song by American hard rock band Kiss, written by rhythm guitarist Paul Stanley. "'Black Diamond' was written almost exactly as it is," he said, "except that the riff wasn't there; Gene [Simmons] brought that part in … It's all about arrangement and embellishment. That's what you're supposed to do in a band: come in and add something. But that doesn't mean you wrote the song."

"Deuce" is a song by the American hard rock band Kiss, written by bassist and vocalist Gene Simmons. The song appeared on Kiss' eponymous 1974 debut album. In addition to being one of the band's most popular and most-covered songs, "Deuce" is a traditional concert opener. The song has appeared on many Kiss live and compilation albums. 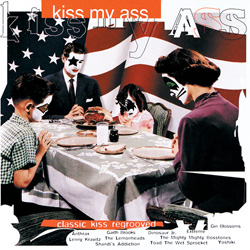 Kiss My Ass: Classic Kiss Regrooved is a 1994 tribute album, featuring a variety of artists covering songs by the American rock band Kiss. Released to coincide with Kiss' 20th anniversary, the album was certified gold by the RIAA, and spent 13 weeks on the charts. Cover Design and Art Direction by Mitchell Kanner.

Spirituality 1983–2008: The Consummate Compendium is a greatest hits album by Spirit of the West, released by Rhino Records on July 15, 2008. 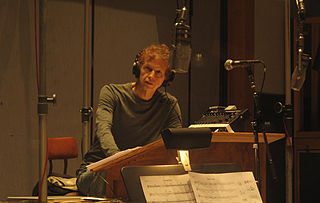 David Richard Campbell is a Canadian-American arranger, composer, and conductor. He has worked on over 450 gold and platinum albums by artists of a wide range of genres, including Rush, Ariana Grande, Harry Styles, Muse, Michael Jackson, Aaliyah, Evanescence, Beyoncé, Aerosmith, Garth Brooks, and various albums by his son Beck. 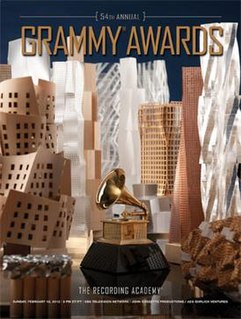 The 54th Annual Grammy Awards were held on February 12, 2012, at the Staples Center in Los Angeles being broadcast on CBS honoring the best in music for the recording year beginning October 1, 2010 through September 30, 2011. LL Cool J hosted the show. It was the first time in seven years that the event had an official host. Nominations were announced on November 30, 2011, on prime-time television as part of "The GRAMMY Nominations Concert Live! – Countdown to Music's Biggest Night", a one-hour special broadcast live on CBS from Nokia Theatre at L.A. Live. Kanye West received the most nominations with seven. Adele, Foo Fighters, and Bruno Mars each received six nominations. Lil Wayne, Skrillex, and Radiohead all earned five nominations. The nominations were criticised by many music journalists as Kanye West's My Beautiful Dark Twisted Fantasy missed out on a nomination for Album of the Year despite being highly critically acclaimed and topping many end of year charts. West's album went on to win Best Rap Album.

"Kiss Me Red" is a song written by the songwriting duo of Billy Steinberg and Tom Kelly, and first released in 1984 for the soundtrack of the short-lived TV series Dreams, where it was performed on the show by the fictional title band. The song was notably covered by Cheap Trick in 1986 on their ninth album The Doctor, and by ELO Part II in 1990 for their album Electric Light Orchestra Part Two.

The 59th Annual Grammy Awards ceremony was held on February 12, 2017. The CBS network broadcast the show live from the Staples Center in Los Angeles. The ceremony recognized the best recordings, compositions, and artists of the eligibility year, which ran from October 1, 2015, to September 30, 2016.

"Man of War" is a song by the English rock band Radiohead, released as a download on 22 June 2017. Radiohead wrote it during the sessions for their second album, The Bends (1995), and performed it on the Bends tour; singer Thom Yorke described it as a homage to James Bond themes. Radiohead worked on it during the sessions for their third album, OK Computer (1997), and worked on a version for the 1998 film The Avengers, but abandoned the recordings.