In the context of infrastructure, open access involves physical infrastructure such as railways and physical telecommunications network plant being made available to clients other than the owners, for a fee.

Infrastructure is the fundamental facilities and systems serving a country, city, or other area, including the services and facilities necessary for its economy to function. Infrastructure is composed of public and private physical improvements such as roads, bridges, tunnels, water supply, sewers, electrical grids, and telecommunications. In general, it has also been defined as "the physical components of interrelated systems providing commodities and services essential to enable, sustain, or enhance societal living conditions".

For example, private railways within a steel works are private and not available to outsiders. In the hypothetical case of the steelworks having a port or a railway to a distant mine, outsiders might want access to save having to incur a possibly large cost of building their own facility.

The Marconi Company was a pioneer of long distance radio communication, which was particularly useful for ships at sea. Marconi was very protective about its costly infrastructure and refused—except for emergencies—to allow other radio companies to share its infrastructure. Even if the message sender was royalty, as in the Deutschland incident of 1902, they continued to refuse access. Since radio communication was so new, it preceded laws, regulations and licences, which might otherwise imposed conditions to open infrastructure to other players.

The Marconi Company was a British telecommunications and engineering company that did business under that name from 1963 to 1987. It was derived from earlier variations in the name and incorporation, spanning a period from its inception in 1897 until 2006, during which time it underwent numerous changes, mergers and acquisitions. The company was founded by the Italian inventor Guglielmo Marconi and began as the Wireless Telegraph & Signal Company. The company was a pioneer of wireless long distance communication and mass media broadcasting, eventually becoming one of the UK's most successful manufacturing companies. In 1999, its defence manufacturing division, Marconi Electronic Systems, merged with British Aerospace to form BAE Systems. In 2006, extreme financial difficulties led to the collapse of the remaining company, with the bulk of the business acquired by the Swedish telecommunications company, Ericsson.

In the northwest of Western Australia, two large mining companies operate their own private railway networks to bring iron ore from mines to the port. In 1999 North Limited made an application to access Rio Tinto's Pilbara system, but Rio's takeover of North Limited meant that application was never fully tested. [1] In 2004 Fortescue Metals Group launched a bid to have the Mt Newman line owned by BHP Billiton "declared" for third party access. [1] The owner of the line claimed that they formed an integral part of the production process, and so should not be subject to completion requirements. When these mines started in the 1960s, state laws required the miners to make their infrastructure available to other players, but no application had been made. [2] In the same region, the Fortescue Metals Group railway has been set up for open access for a fee.

North Limited was a diversified mining and resources company. Although based in Australia, its operations eventually extended to six continents. By the late 20th century the company had become the fourth largest iron ore exporter in the world with expansion underway which would have made it equal third. Its biggest asset was a majority stake in Robe River, a major miner of the Pilbara iron ore deposits of Western Australia and the worlds lowest cost producer of iron ore.

In June 2008 the Federal Government advisory body, the National Competition Council, recommended that BHP Billiton's Goldsworthy railway and Rio Tinto's Robe River and Hamersley lines should be declared open access. Treasurer Wayne Swan was given 60 days to make a final decision based on this recommendation. [3] On October 27 the three lines were 'declared' with open access to apply from November 20, 2008. This will apply for 20 years under the National Access Regime within the Trade Practices Act 1974. The declaration does not give a right of access, but provides a third party with recourse if access terms cannot be negotiated with the infrastructure owner. [4] 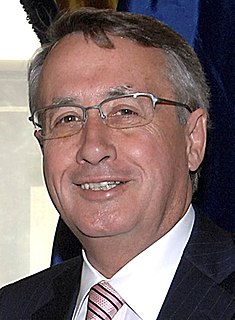 Wayne Maxwell Swan is a former Australian politician who was the Deputy Prime Minister of Australia and Deputy Leader of the Labor Party from 2010 to 2013, and the Treasurer of Australia from 2007 to 2013.

A player seeking access to infrastructure would expect to pay several fees of a capital and operating kind. Hopefully the cost of this is less than having to build separate infrastructure. It is in the public interest that access disputes be resolved in an efficient way, so that for example, profits are maximised and therefore income tax on those profits is also maximised.

The public interest is "the welfare or well-being of the general public" and society.

The potential for monopoly infrastructure to charge high fees and provide poor service has long been recognised. Monopolies are often inevitable because of high capital costs, with governments often imposing conditions, in exchange for approval of the project and for the granting of useful powers such as land resumption. Thus a canal might have its rates regulated, and be forbidden to operate canal boats on its own waters.

A monopoly exists when a specific person or enterprise is the only supplier of a particular commodity. This contrasts with a monopsony which relates to a single entity's control of a market to purchase a good or service, and with oligopoly which consists of a few sellers dominating a market. Monopolies are thus characterized by a lack of economic competition to produce the good or service, a lack of viable substitute goods, and the possibility of a high monopoly price well above the seller's marginal cost that leads to a high monopoly profit. The verb monopolise or monopolize refers to the process by which a company gains the ability to raise prices or exclude competitors. In economics, a monopoly is a single seller. In law, a monopoly is a business entity that has significant market power, that is, the power to charge overly high prices. Although monopolies may be big businesses, size is not a characteristic of a monopoly. A small business may still have the power to raise prices in a small industry.

Eminent domain, land acquisition, compulsory purchase, resumption, resumption/compulsory acquisition (Australia), or expropriation is the power of a state, provincial, or national government to take private property for public use. However, this power can be legislatively delegated by the state to municipalities, government subdivisions, or even to private persons or corporations, when they are authorized by the legislature to exercise the functions of public character.

Where there are many separate railways and one railway wishes to run trains off their own tracks onto the tracks of another, they may seek trackage rights from the other railway(s). This can be done by voluntary agreement, or by compulsory order of a regulator. In time of flood and accident which puts a line out of order, compulsory trackage rights may be ordered in the public interest to keep traffic flowing, assuming that alternative routes exist.

One of the problems faced by Open Access is what is a fair price. Consider the Iron Ore minnow BC Iron which seeks access to the Forstescue railway. (Fortescue has declared itself to be an open access operator).

In 2010, Mt Gibson Mining will be spending $20m to upgrade the ore unloaded at Geraldton. The facility will be open to other users who will pay a toll for such usage. [5]

The Oakajee port and railway network is also to be open access.

In 2011, GVK has offer to make its proposed railway from the Galilee Basin to Abbot Point as open access to other players. [6]

In the telecommunications industry, open access to existing infrastructure, in the form of local loop unbundling, duct sharing, utility pole sharing, and fiber unbundling, is one proposed solution to the middle mile problem.

Fortescue Metals Group Ltd is an Australian iron ore company. Fortescue is the fourth largest iron ore producer in the world after BHP Billiton, Rio Tinto, and Vale. The company has holdings of more than 87,000 km² in the Pilbara region of Western Australia, making it the largest tenement holder in the state, larger than both BHP Billiton and Rio Tinto.

The Hamersley & Robe River railway, majority-owned by the Rio Tinto Group, and operated by its subsidiary Pilbara Iron, is a private rail network in the Pilbara region of Western Australia for the purpose of carrying iron ore. The network is larger than any other Australian heavy freight rail network in private ownership. The total length of its track is about 1,300 km (807.78 mi).

The Goldsworthy railway, owned and operated by BHP Billiton, is a private rail network in the Pilbara region of Western Australia built to carry iron ore. It is one of two railway lines the group operates in the Pilbara, the other being the Mount Newman railway.

The Mount Newman railway, owned and operated by BHP Billiton, is a private rail network in the Pilbara region of Western Australia built to carry iron ore. It is one of two railway lines the group operates in the Pilbara, the other being the Goldsworthy railway. 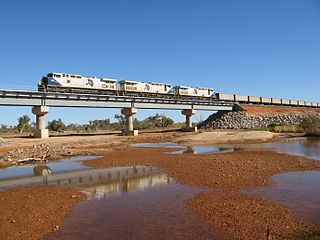 The Fortescue Railway, owned and operated by Fortescue Metals Group (FMG), is a private rail network in the Pilbara region of Western Australia built to carry iron ore. It opened in 2008. When it was completed it was the heaviest haul railway in the world, designed for 40 tonnes axleloads, 2.5 to 5 tonnes heavier than the other Pilbara iron ore rail systems. On 4 November 2014, FMG Rail commenced trialling 42 tonnes axle loads.

The Cloudbreak mine is an iron ore mine located in the Pilbara region of Western Australia, 89 kilometres west-south-west of Nullagine, in the Chichester Range.

The Yandicoogina mine, often shortened to Yandi, is an iron ore mine located in the Pilbara region of Western Australia, 95 kilometres north-west of Newman. it should not be confused with BHP Billiton's Yandi mine, which is located nearby.

The Hope Downs 4 mine is an iron ore mine located in the Pilbara region of Western Australia, 100 kilometres northwest of Newman.

The Mount Whaleback mine is an iron ore mine located in the Pilbara region of Western Australia, 6 kilometres west of Newman.

The Christmas Creek mine is an iron ore mine located in the Pilbara region of Western Australia, 61 kilometres south-south-west of Nullagine, in the Chichester Range.

The Area C mine is an iron ore mine located in the Pilbara region of Western Australia, 92 kilometres west-north-west of Newman.

The Jimblebar mine is an iron ore mine located in the Pilbara region of Western Australia, 41 kilometres east of Newman.

The Pardoo mine is an iron ore mine located in the Pilbara region of Western Australia, 75 kilometres east of Port Hedland.

The Yarrie mine is an iron ore mine located in the Pilbara region of Western Australia, 90 kilometres north-east of Marble Bar. 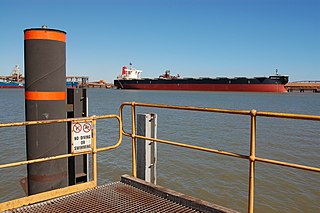 The Pilbara Railways are a collection of railways in the Pilbara region of North-West Western Australia.