The first incarnation of the PCHL had four teams and lasted three seasons. Brothers Frank Patrick and Lester Patrick, financed by their wealthy lumberman father Joseph Patrick founded it and operated franchises in Vancouver and Victoria, with Frank, one of the founders of the earlier Pacific Coast Hockey Association (PCHA) as president. [1] The Victoria Cubs' Arena was destroyed by fire in 1929, after which the club continued for the season and disbanded. A replacement team was formed in Tacoma, Washington.

The league disbanded after the 1941 season, primarily as a result of World War II.

The final incarnation of the league was managed by Hockey Hall of Fame member Al Leader, and grew out of combining teams from the Southern California Hockey League and the Northwest International Hockey League. The PCHL was founded as an amateur loop, partly because the National Hockey League recognized Pacific Coast Hockey Association (PCHA) founder Lester Patrick as the territorial rights holder for professional hockey in Vancouver, Portland and Seattle. In 1948, however, the ten team league voted to turn pro, and was recognized as such by the NHL.

Before the start of the 1951–1952 season, the PCHL had dwindled to a six team league. The neighbouring Western Canada Senior Hockey League (WCSHL), which played minor senior hockey on the Canadian prairies, had also dwindled, to just three franchises. The three WCSHL franchises turned professional and joined the PCHL for 1951–1952. One year later, the PCHL renamed itself the Western Hockey League before the start of the 1952–1953 season.

The PCHL championship trophy was the President's Cup. 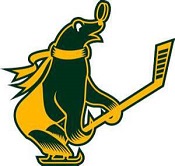 Frank Ludwig Jerwa was a Canadian ice hockey player. He played 81 games for the Boston Bruins and St. Louis Eagles of the National Hockey League between 1931 and 1935, as well as several other teams in various minor leagues during his career, which lasted from 1928 to 1941.

The Western Lacrosse Association (WLA) is a men's Senior A box lacrosse sanctioned by the Canadian Lacrosse Association. It consists of seven teams, based in cities throughout southwestern British Columbia. Each year, the playoff teams battle for the right to compete against the Major Series Lacrosse champion for the Mann Cup every September. The championship is hosted alternately between Ontario and British Columbia every year.

Denman Arena was an indoor arena located in downtown Vancouver, British Columbia. The arena was located at 1805 West Georgia Street at the northwest corner with Denman Street. It opened in December 1911 and was destroyed by fire in 1936. Its primary use was for ice sports such as ice hockey. It was the home ice rink of the Vancouver Millionaires professional ice hockey team, and was the location of 1915 Stanley Cup championships. The arena was also used for other sports, musical performances and public assemblies. It was an assembly point for Canadian servicemen during World War I. The 10,500 seat arena was the largest in Canada at the time, and introduced mechanically frozen or "artificial" ice to Canada. 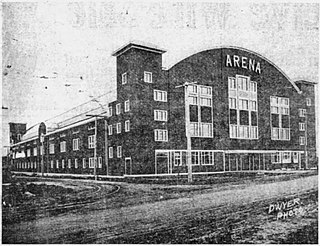 Patrick Arena was the main sports arena located in the Greater Victoria, British Columbia, area. The wood constructed arena was located in the suburb municipality of Oak Bay, on the north east corner of Cadboro Bay Road and Epworth Street. Built in 1911 at a cost of $110,000 with a capacity for 4,000 spectators, it officially opened with public skating on December 25, 1911. More than 600 skaters enjoyed the thrill of opening day. The owners, Frank and Lester Patrick, built the arena primarily to accommodate their hockey team in the newly formed Pacific Coast Hockey Association (PCHA). 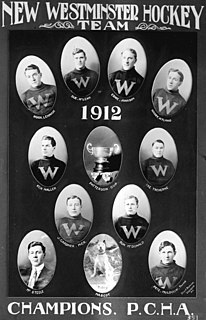 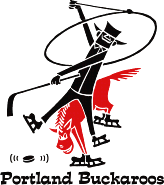 The Portland Buckaroos was the name of several professional ice hockey teams based in Portland, Oregon.

The North West Hockey League was an ice hockey minor league with teams in the western United States and western Canada that existed from 1933 to 1936. It was formed from the Calgary and Vancouver franchises of the Western Canada Hockey League and three new teams.

Gordon Walter Fashoway was a Canadian professional ice hockey left winger. During the 1950–51 season, he played in his only 13 NHL games for the Chicago Black Hawks. He was born in Portage la Prairie, Manitoba.

The Seattle Totems were a professional ice hockey franchise in Seattle, Washington. Under several names prior to 1958, the franchise was a member of the Pacific Coast Hockey League between 1944 and 1974. In their last season of existence, the Totems played in the Central Hockey League in the 1974–75 season. They played their home games in the Civic Ice Arena and later at the Seattle Center Coliseum. The Totems won three WHL Lester Patrick Cup championships in 1959, 1967 and 1968.

The Los Angeles Monarchs were a professional ice hockey team, active from 1944–1950, in the Pacific Coast Hockey League (PCHL). The Monarchs are the first professional ice hockey team to win a league championship for the city of Los Angeles. They played in the southern division of the PCHL, alongside teams from the neighboring cities such as the Pasadena Panthers, the Hollywood Wolves, and the San Diego Skyhawks. The southern division also included the San Francisco Shamrocks, Oakland Oaks and, in 1947, the Fresno Falcons.

The Portland Eagles were a minor league professional hockey team located in Portland, Oregon. They were known as the Portland Penguins for one season.