The Saskatoon Quakers were an ice hockey team that was based in Saskatoon, Saskatchewan, Canada. The team existed from 1945 until 1959, and again from 1965–1971, playing in various senior and minor professional leagues during that time. The Quakers represented Canada in 1934 World Ice Hockey Championships held in Milan, Italy where they won Gold. [1] In 1952, they captured the President's Cup as Pacific Coast Hockey League champions.

The Quakers were a founding member of the Western Canada Senior Hockey League (WCSHL) in 1945, where they were known their first two seasons as the Saskatoon Elks. They captured the WCSHL championship in 1950–51. The following season, the Quakers joined the Calgary Stampeders and Edmonton Flyers in turning professional as the WCSHL merged with the Pacific Coast Hockey League, which renamed itself the Western Hockey League in the following year. As a result of the merger, the Quakers lost their amateur status, becoming a minor-professional team. The Quakers succumbed, after five seasons in the WHL, to the increased costs of operating a minor-professional team.

When the Quakers won the WCSHL 1950–51 championship, they became the western league's representative to the 1951 Alexander Cup for the national major ('open' to both amateur and professional leagues) senior ice hockey championship of Canada. They would lose to the Toronto St. Michaels Monarchs in the Alexander Cup's semi-finals.

In 1957–58, Saskatoon returned to the WHL, splitting home games with St. Paul, Minnesota as the Saskatoon/St. Paul Regals. The two city concept did not work, and in 1958–59, the team was restored as the Saskatoon Quakers. They would last only that one season before folding. Saskatoon has not been represented by a professional hockey team since, but in 1965 the Quakers name was reborn with an amateur team in the Western Canada Senior Hockey League.

Douglas Wagner Bentley was a Canadian ice hockey left winger who played 13 seasons in the National Hockey League (NHL) for the Chicago Black Hawks and New York Rangers as part of a senior and professional career that spanned nearly three decades. He was named to four NHL All-Star Teams in his career and was the scoring leader in points and goals in 1942–43 and again in goals in 1943–44. 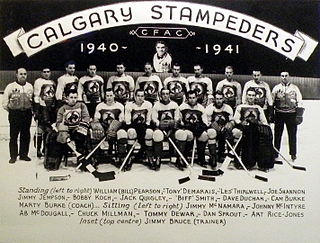 The now defunct North Saskatchewan Junior B Hockey League (NSJHL) was an independent, successful Junior "B" ice hockey league in Saskatchewan, Canada, sanctioned by Hockey Canada. The league comprised teams from cities and towns such as Saskatoon and Melfort, situated in the northern part of the province of Saskatchewan. Conversely, a second Junior "B" league, the South Saskatchewan (SSJHL) included teams which were located in towns primarily in the southern part of Saskatchewan, such as Regina, Weyburn and Melville. Players who played at the Junior "B" level were approximately 14-20 years old, and Junior "B" was considered the entry level and a "feeder league" into Junior Hockey in Canada. Many players who exhibited a high degree of skill eventually graduated to Junior "A", Collegiate, or Major Junior such as the Western Hockey League teams such as the local Saskatoon Blades or teams located in other western provinces such as the New Westminster Bruins in British Columbia, for example.

Jesse Wallin is a former Canadian professional ice hockey defenceman who played in 49 career National Hockey League games for the Detroit Red Wings. He was born in Saskatoon, Saskatchewan, but was raised and played his minor hockey in North Battleford, Saskatchewan. He was the General Manager and Head Coach of the Red Deer Rebels of the Western Hockey League (WHL) for five seasons, and is currently an amateur scout for the Detroit Red Wings. 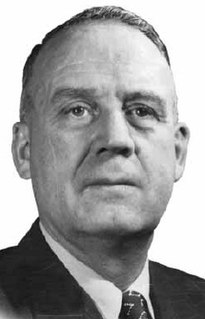 The 1951 Alexander Cup was the Canadian national major senior ice hockey championship for the 1950-51 season.

Marcel Comeau is a Canadian retired ice hockey player, coach, scout, and National Hockey League team executive. He played eleven seasons in the International Hockey League (IHL), where he was the league's top scorer and won the IHL Most Valuable Player Award in 1981. He later coached in the Western Hockey League (WHL), winning two WHL Coach of the Year Awards, and a Canadian Hockey League Coach of the Year Award. He also led Team Canada to a gold medal at the 1996 World Juniors, and later served as a team executive for the Atlanta Thrashers, and the Winnipeg Jets.