The CBL was based in Vancouver, British Columbia.

The championship trophy was the Jenkins Cup, named after the commissioner of the league, Ferguson Jenkins.

The CBL was the brainchild of Tony Riviera, a former major league scout, and the face of the league. It was backed by former Microsoft product developer Charlton Lui, and later by former Yahoo! president, and part owner of the San Francisco Giants, Jeff Mallett. [1] Canadian Baseball Hall of Famer Ferguson Jenkins was brought in to act as the league's Commissioner.

Riviera's vision had big goals, and he followed suit by making big promises. Riviera stated that the CBL would be "AAA quality", [2] He was rumoured to have approached the Winnipeg Goldeyes about switching leagues, and even nominated Pete Rose for the Canadian Baseball Hall of Fame. [3]

The big plans initially appeared to be possible. The league announced a national television deal with sports channel The Score, [4] while a crowd of 5,100 took in the league's inaugural game in London, Ontario. [5]

However, despite early promises that the league could, and would, average over 2,000 fans per game, it was clear that the CBL was not remotely close to projections. Only two markets averaged over 1,000 fans per game: Victoria at 1,700 and Calgary at 1,000. [6] Four teams averaged fewer than 300 per game: Kelowna (271), Saskatoon (256), Welland (181) and Trois-Rivières (163). [5] The national TV deal was cancelled after only six weeks after the CBL was unable to find enough sponsors to cover the production costs. [6]

The Montreal franchise never played a game in that city due to a lack of a playing field, as they were denied a lease at Olympic Stadium. Their home games were played at Stade Amedee Roy in Sherbrooke instead.

The Abbotsford Saints relocated to Trois Rivieres, Quebec before the season started.

The CBL's swan song was the All-Star game, held at Calgary. Unwilling to absorb any more losses, Mallett pulled the plug on the league, suspending operations the day before the game. A crowd of over 5,700 (the largest crowd to come to Burns Park all season) watched the East and West All-Stars play to a 5-5, ten-inning tie. Following the game, a home run derby was held, in which Jamie Gann of Kelowna hit the only dinger, thus giving the West the victory. [7] Despite losing as much as $4 million on the CBL, [6] Mallett initially promised to bring the league back in 2004. However, the remaining assets of the league were quietly auctioned off on December 1, 2003 in Vancouver and the league never returned.

The eight teams that played in the CBL, and their record at the time the league was suspended. The Calgary Outlaws were declared the Jenkins Cup champions on the basis of having the league's best record.

The Montreal Impact was a Canadian professional soccer club based in Montreal, Quebec, Canada. Founded in 1992, the team played in the United Soccer League. Later, the Impact played in the North American Soccer League (NASL), the second tier of the American Soccer Pyramid until the 2011 season. The owner Joey Saputo now operates the MLS team Club de Foot Montréal, which also carried the Montreal Impact name until 2021. 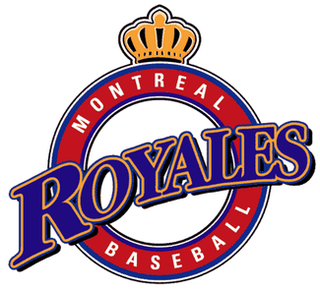 The Montreal Royales were one of eight teams in the short-lived Canadian Baseball League. The Royales of the CBL, unrelated to the history-making Montreal Royals of 1939–1960, were strictly a road team which never succeeded in obtaining a "home" field in the Montreal area to play, despite several efforts to negotiate one. All nine of their home games were played in neutral cities such as Sherbrooke. The Royales finished their season at the bottom of their division with a 10-22 record.

Todd William Simpson is a Canadian former ice hockey player who spent parts of 10 seasons in the National Hockey League. He is currently a real estate agent in Kelowna, British Columbia.

Baseball in Canada dates back to the 19th century, and is played at various levels of competition throughout the country. There is currently one major league team, the Toronto Blue Jays, founded in 1977; Canada's first major league team, the Montreal Expos, formed in 1969, relocated to Washington, D.C., in 2005.

The Sherbrooke Pirates was the name of a Canadian minor league baseball franchise in the Double-A Eastern League representing Sherbrooke, Québec, that existed from 1972–73. Affiliated with the namesake Pittsburgh Pirates of Major League Baseball, the Sherbrooke club played at le Stade Amedée-Roy.