The Saskatoon Sheiks/Saskatoon Crescents were a professional ice hockey team in the Western Canada Hockey League (WCHL) and Prairie Hockey League (PrHL) from 1921 to 1928. The team played their home games at the Crescent Arena in Saskatoon, Saskatchewan.

The Sheiks entered the WCHL in the 1921–22 season. On February 3, 1922, poor attendance forced the club to move to the Moose Jaw Arena and play as the Moose Jaw Sheiks.[ citation needed ]

The team was reorganized as the Saskatoon Crescents Hockey Club in April 1922. [1] Frederick E. Betts was appointed chairman of the team's management committee, made the final decision on player contracts, and had a policy of not making statements to the media until a deal was final. [2] Betts signed ten new players to contracts by November in addition to three players who returned from the previous season. He sought to sign Newsy Lalonde from the Montreal Canadiens, and was willing to buy Lalonde's release pending all other National Hockey League clubs waiving their right to claim him. [3] [4] Betts later agreed to trade the rights to highly-touted prospect Aurèle Joliat to bring Lalonde to the Crescents as the team's player-coach for the season. [5] The Crescents won eight of thirty games played, placed fourth during the 1922–23 WCHL season and did not qualify for the playoffs, despite that Lalonde led the league with 30 goals scored. [6] [7]

New ownership took over the team in May 1923. [8] The team continued playing until 1928 when it folded.[ citation needed ] 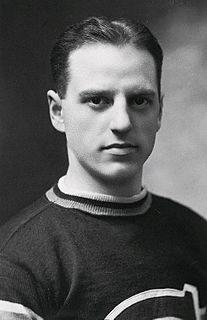 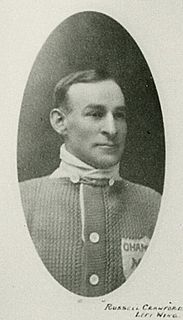 Samuel Russell Crawford was a Canadian professional ice hockey forward who played for the Quebec Bulldogs of the National Hockey Association (NHA), Ottawa Senators and Toronto Arenas of the National Hockey League (NHL) and Saskatoon Crescents, Calgary Tigers and Vancouver Maroons of the Western Canada Hockey League (WCHL). He was a two-time Stanley Cup champion, winning the trophy with the Bulldogs in 1913 and the Arenas in 1918. Crawford was one of the sport's early stars and appeared in 258 games in the three major leagues, scoring 110 goals. He was inducted into the Hockey Hall of Fame in 1963.

The 1967–68 WCJHL season was the second season of the Western Canada Junior Hockey League (WCJHL). The league adopted its new name after being known as the Canadian Major Junior Hockey League in its first season. Eleven teams completed a 60 game season, with the Estevan Bruins winning the President's Cup.

The 1968–69 WCHL season was the third season of the Western Canada Hockey League. Eight teams completed a 60-game season, with the Flin Flon Bombers winning the President's Cup. 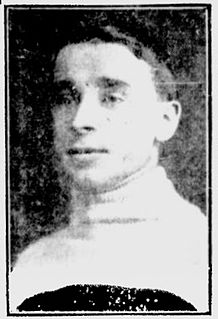 The Moose Jaw Maroons were a minor-league ice hockey team in the Prairie Hockey League. Based in Moose Jaw, Saskatchewan, Canada, they existed from 1926–28. In 1926–27, the team was known as the Moose Jaw Warriors before changing its name to the Maroons.

The Big-4 League was a top level senior ice hockey league that operated in Calgary and Edmonton, Alberta for two seasons between 1919 and 1921. Created with the intention of competing for the Allan Cup senior-amateur championship, the league's existence was marred by accusations that its teams were secretly paying their players. The Big-4 lost its amateur status after its first season and operated as an independent league until further accusations of the use of ineligible players led to its collapse in 1921. Two of its teams, the Calgary Tigers and Edmonton Eskimos went on to form the professional Western Canada Hockey League.

Roderick Neil "Scotty" Munro was a Canadian ice hockey coach. Munro was a key part of the group that formed the Western Hockey League (WHL) in 1972, which includes Bill Hunter, Ben Hatskin, and Ed Chynoweth.

Frederick Everett Betts was a Canadian ice hockey administrator and businessman. He concurrently served as president of the Canadian Amateur Hockey Association (CAHA), the Saskatchewan Amateur Hockey Association, and the Saskatchewan branch of the Amateur Athletic Union of Canada during the 1919–20 season. He sought regulations to govern amateur sport in Canada, which he felt was in a state of disrepute due to the lack of discussion and the postponement of meetings during World War I. He supported the reinstatement of former professionals as amateur athletes as favoured in Western Canada, despite the growing rift with delegates from Eastern Canada on the issue. He sought for the Allan Cup trustees to allow the CAHA to have more say into how the national playoffs were operated and argued for receiving an annual percentage of profits from gate receipts to allow the CAHA to govern effectively.