The Palomar Transient Factory (PTF, obs. code: I41), was an astronomical survey using a wide-field survey camera designed to search for optical transient and variable sources such as variable stars, supernovae, asteroids and comets. [1] The project completed commissioning in summer 2009, and continued until December 2012. It has since been succeeded by the Intermediate Palomar Transient Factory (iPTF), [2] which itself transitioned to the Zwicky Transient Facility in 2017/18. All three surveys are registered at the MPC under the same observatory code for their astrometric observations. [3]

PTF was a collaboration of Caltech, LBNL, Infrared Processing and Analysis Center, Berkeley, LCOGT, Oxford, Columbia and the Weizmann Institute. The project was led by Shrinivas Kulkarni at Caltech. As of 2018, he leads the Zwicky Transient Facility. [3]

Image Subtraction for near-realtime transient detection was performed at LBNL; efforts to continue to observe interesting targets were coordinated at Caltech, and the data was processed and archived for later retrieval at the Infrared Processing and Analysis Center (IPAC). Photometric and spectroscopic followup of detected objects was undertaken by the automated Palomar 1.5-meter telescope and other facilities provided by consortium members.

The efforts being undertaken during the five-year project include:

Data taken with the camera were transferred to two automated reduction pipelines. A near-realtime image subtraction pipeline was run at LBNL and had the goal of identifying optical transients within minutes of images being taken. The output of this pipeline was sent to UC Berkeley where a source classifier determined a set of probabilistic statements about the scientific classification of the transients based on all available time-series and context data.

On few-day timescales the images were also ingested into a database at IPAC. Each incoming frame was calibrated and searched for objects (constant and variable), before the detections were merged into a database. Lightcurves of approximately 500 million objects had been accumulated. This database was planned to be made public after an 18-month proprietary period, subject to available resources.

PTF uses software written to assist a human in weeding out false positives when searching for small near-Earth objects. [6]

A. Rau et al., PASP, 121, 1334: "Exploring the Optical Transient Sky with the Palomar Transient Factory" — In this article, the scientific motivation for PTF is presented and a description of the goals and expectations is provided. 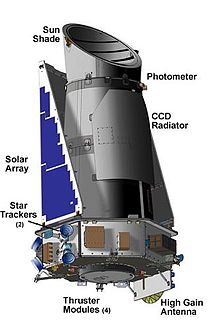 Photometry, from Greek photo- ("light") and -metry ("measure"), is a technique used in astronomy that is concerned with measuring the flux or intensity of light radiated by astronomical objects. This light is measured through a telescope using a photometer, often made using electronic devices such as a CCD photometer or a photoelectric photometer that converts light into an electric current by the photoelectric effect. When calibrated against standard stars of known intensity and colour, photometers can measure the brightness or apparent magnitude of celestial objects. 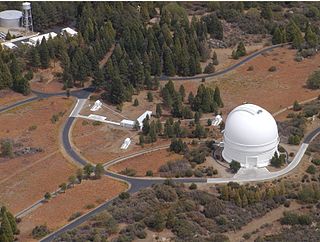 Palomar Observatory is an astronomical research observatory in San Diego County, California, United States, in the Palomar Mountain Range. It is owned and operated by the California Institute of Technology (Caltech). Research time at the observatory is granted to Caltech and its research partners, which include the Jet Propulsion Laboratory (JPL), Yale University, and the National Optical Observatories of China.

The Lincoln Near-Earth Asteroid Research (LINEAR) project is a collaboration of the United States Air Force, NASA, and the Massachusetts Institute of Technology's Lincoln Laboratory for the systematic detection and tracking of near-Earth objects. LINEAR was responsible for the majority of asteroid discoveries from 1998 until it was overtaken by the Catalina Sky Survey in 2005. As of 15 September 2011, LINEAR had detected 231,082 new small Solar System bodies, of which at least 2,423 were near-Earth asteroids and 279 were comets. The instruments used by the LINEAR program are located at Lincoln Laboratory's Experimental Test Site (ETS) on the White Sands Missile Range (WSMR) near Socorro, New Mexico.

Charles Thomas Kowal was an American astronomer known for his observations and discoveries in the Solar System. As a staff astronomer at Caltech's Mount Wilson and Palomar Mountain observatories between 1961 and 1984, he found the first of a new class of Solar System objects, the centaurs, discovered two moons of the planet Jupiter, and discovered or co-discovered a number of asteroids, comets and supernovae. He was awarded the James Craig Watson Medal for his contributions to astronomy in 1979.

SkyMapper is a fully automated 1.35 m (4.4 ft) wide-angle optical telescope at Siding Spring Observatory in northern New South Wales, Australia. It is one of the telescopes of the Research School of Astronomy and Astrophysics of the Australian National University (ANU). The telescope has a compact modified Cassegrain design with a large 0.69 m secondary mirror, which gives it a very wide field of view: its single, dedicated instrument, a 268-million pixel imaging camera, can photograph 5.7 square degrees of sky. The camera has six light filters which span from ultraviolet to near infrared wavelengths. 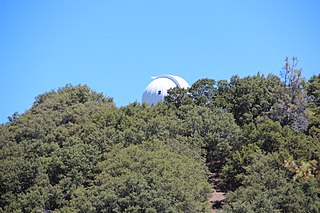 The Katzman Automatic Imaging Telescope (KAIT) is an automated telescope used in the search for supernovae.

The All Sky Automated Survey (ASAS) is a Polish project implemented on 7 April 1997 to do photometric monitoring of approximately 20 million stars brighter than 14 magnitude all over the sky. The automatic telescopes discovered two new comets in 2004 and 2006. The ASAS-South, located in Chile and ASAS-North, located in Hawai'i, are managed by Grzegorz Pojmański of the Warsaw University Observatory via the internet.

The C. Donald Shane telescope is a 120-inch (3.05-meter) reflecting telescope located at the Lick Observatory in San Jose, California. It was named after astronomer C. Donald Shane in 1978, who led the effort to acquire the necessary funds from the California Legislature, and who then oversaw the telescope's construction. It is the largest and most powerful telescope at the Lick Observatory, and was the second-largest optical telescope in the world when it was commissioned in 1959.

The Vera C. Rubin Observatory, previously referred to as the Large Synoptic Survey Telescope (LSST), is an astronomical observatory currently under construction in Chile. Its main task will be an astronomical survey, the Legacy Survey of Space and Time (LSST). The Rubin Observatory has a wide-field reflecting telescope with an 8.4-meter primary mirror that will photograph the entire available sky every few nights. The word synoptic is derived from the Greek words σύν and ὄψις, and describes observations that give a broad view of a subject at a particular time. The observatory is named for Vera Rubin, an American astronomer who pioneered discoveries about galaxy rotation rates.

A transient astronomical event, often shortened by astronomers to a transient, is an astronomical object or phenomenon whose duration may be from milliseconds to days, weeks, or even several years. This is in contrast to the timescale of the millions or billions of years during which the galaxies and their component stars in our universe have evolved. Singularly, the term is used for violent deep-sky events, such as supernovae, novae, dwarf nova outbursts, gamma-ray bursts, and tidal disruption events, as well as gravitational microlensing, transits, eclipses, and comets. These events are part of the broader topic of time domain astronomy.

An integral field spectrograph, or a spectrograph equipped with an integral field unit (IFU), is an optical instrument combining spectrographic and imaging capabilities, used to obtain spatially resolved spectra in astronomy and other fields of research such as bio-medical science and earth observation. 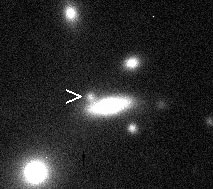 NGC 5177 is a lenticular galaxy. Based on a redshift of 6467 km/s the galaxy is crudely estimated to be about 300 million light-years away.

Corralitos Observatory was an astronomical observatory located in the Rough and Ready Hills approximately 30 kilometers (19 mi) west of Las Cruces, New Mexico. It was formally dedicated on October 12, 1965, serving as a remote station of Dearborn Observatory, Northwestern University. In October 1965, a NASA program to detect transient lunar phenomenon (TLP) was begun by the staff. Using two-person observer teams, a total of 6,466 man-hours of lunar observation was recorded. The program was run until 1972 but did not confirm any TLP. Using ninety-eight selected reports of TLPs received from amateurs during this period, 39 were checked from Corralitos Observatory. 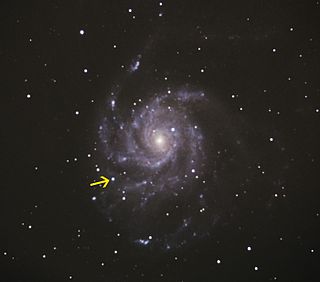 SN 2011fe, initially designated PTF 11kly, was a Type Ia supernova discovered by the Palomar Transient Factory (PTF) survey on 24 August 2011 during an automated review of images of the Messier 101 from the nights of 22 and 23 August 2011. It was located in Messier 101, the Pinwheel Galaxy, 21 million light years from Earth. It was observed by the PTF survey very near the beginning of its supernova event, when it was approximately 1 million times too dim to be visible to the naked eye. It is the youngest type Ia ever discovered. About 13 September 2011, it reached its maximum brightness of apparent magnitude +9.9 which equals an absolute magnitude of about -19, equal to 2.5 billion Suns. At +10 apparent magnitude around 5 September, SN 2011fe was visible in small telescopes. As of 30 September the supernova was at +11 apparent magnitude in the early evening sky after sunset above the northwest horizon. It had dropped to +13.7 as of 26 November 2011. 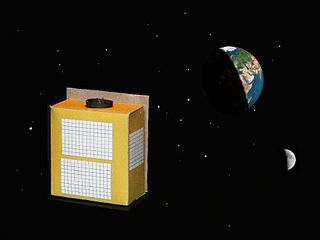 ULTRASAT is an astronomical small satellite whose unprecedentedly large field of view, 210 square degrees, will detect and monitor transient astronomical events in the near-ultraviolet (220–280 nm) spectral region. ULTRASAT will observe a large patch of sky, alternating every six months between the southern and northern hemisphere. The satellite will be launched into geosynchronous orbit in 2023. All ULTRASAT data will be transmitted to the ground in real time. Upon detection of a transient event, ULTRASAT will provide alerts within 20 minutes to other ground-based and space telescopes to be directed to the source for further observation of the event in other wavelength bands.

The All Sky Automated Survey for SuperNovae (ASAS-SN) is an automated program to search for new supernovae and other astronomical transients, headed by astronomers from the Ohio State University, including Christopher Kochanek and Krzysztof Stanek. It has 20 robotic telescopes in both the northern and southern hemispheres. It can survey the entire sky approximately once every day.

The Zwicky Transient Facility is a wide-field sky astronomical survey using a new camera attached to the Samuel Oschin Telescope at the Palomar Observatory in California, United States. Commissioned in 2018, it supersedes the (Intermediate) Palomar Transient Factory (2009–2017) that used the same observatory code. It is named after the astronomer Fritz Zwicky. 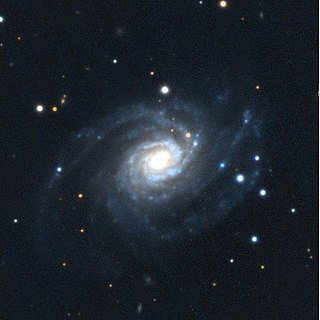 NGC 753 is a spiral galaxy located 220 million light-years away in the constellation Andromeda. The galaxy was discovered by astronomer by Heinrich d'Arrest on September 16, 1865 and is a member of Abell 262.