The Minor Planet Center (MPC) is the official body for observing and reporting on minor planets under the auspices of the International Astronomical Union (IAU). Founded in 1947, it operates at the Smithsonian Astrophysical Observatory.

The Minor Planet Center is the official worldwide organization in charge of collecting observational data for minor planets (such as asteroids), calculating their orbits and publishing this information via the Minor Planet Circulars . Under the auspices of the International Astronomical Union (IAU), it operates at the Smithsonian Astrophysical Observatory, which is part of the Center for Astrophysics along with the Harvard College Observatory. [1]

The MPC runs a number of free online services for observers to assist them in observing minor planets and comets. The complete catalogue of minor planet orbits (sometimes referred to as the "Minor Planet Catalogue") may also be freely downloaded. In addition to astrometric data, the MPC collects light curve photometry of minor planets. A key function of the MPC is helping observers coordinate follow up observations of possible near-Earth objects (NEOs) via its NEO web form and blog. [2] [3] The MPC is also responsible for identifying, and alerting to, new NEOs with a risk of impacting Earth in the few weeks following their discovery (see Potentially hazardous objects and § Videos). [1]

The Natural Satellites Ephemeris Service is an online service of the Minor Planet Center. The service provides "ephemerides, orbital elements and residual blocks for the outer irregular satellites of the giant planets".

Themisto, also known as Jupiter XVIII, is a small prograde irregular satellite of Jupiter. It was discovered in 1975, subsequently lost, and rediscovered in 2000.

Siarnaq, also designated Saturn XXIX, is a prograde irregular satellite of Saturn. It was discovered at the Mauna Kea Observatory by astronomers Brett Gladman and John Kavelaars in 2000, and given the temporary designation S/2000 S 3. It was named after Siarnaq, more widely known as Sedna, the Inuit goddess of the sea, and is the largest member of Saturn's Inuit group of irregular satellites.

Matthew J. Holman is a Smithsonian astrophysicist and lecturer at Harvard University. Holman studied at MIT, where he received his bachelor's degree in mathematics in 1989 and his PhD in planetary science in 1994. He was awarded the Newcomb Cleveland Prize in 1998.

(119070) 2001 KP77, provisional designation:2001 KP77, is a resonant trans-Neptunian object in the Kuiper belt, a circumstellar disc located in the outermost region of the Solar System. It was discovered on 23 May 2001, by American astronomer Marc Buie at the Cerro Tololo Observatory in Chile. The object is locked in a 4:7 orbital resonance with Neptune. It has a red surface color and measures approximately 176 kilometers (110 miles) in diameter. As of 2021, it has not been named. 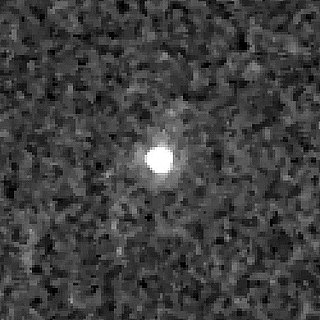 (42301) 2001 UR163, prov. designation: 2001 UR163, is a resonant trans-Neptunian object and possible dwarf planet located in the outermost region of the Solar System. The object measures approximately 352 kilometers (220 miles) in diameter with a high albedo and stays in an uncommon orbital resonance (4:9) with Neptune. It has the reddest color (RR-U) of any object in the Solar System. It was discovered on 21 October 2001 by astronomers of the Deep Ecliptic Survey program at Kitt Peak National Observatory near Tucson, Arizona, United States. As of 2021, it has not been named.

(118228) 1996 TQ66, prov. designation:1996 TQ66, is a resonant trans-Neptunian object of the plutino population in the Kuiper belt, located in the outermost region of the Solar System. It was discovered on 8 October 1996, by American astronomers Jun Chen, David Jewitt, Chad Trujillo and Jane Luu, using the UH88 telescope at the Mauna Kea Observatories, Hawaii. The very red object measures approximately 185 kilometers (110 miles) in diameter. As of 2021, it has not been named.

(118378) 1999 HT11, provisional designation:1999 HT11, is a trans-Neptunian object from the outermost region of the Solar System, locked in a 4:7 orbital resonance with Neptune. It was discovered on 17 April 1999, by astronomers at the Kitt Peak Observatory, Arizona, in the United States. The very red object measures approximately 134 kilometers (83 miles) in diameter. As of 2021, it has not been named.

2044 Wirt, provisional designation 1950 VE, is a binary Phocaea asteroid and Mars-crosser, approximately 6.7 kilometers in diameter. The minor-planet moon has an estimated diameter of 1.89 kilometer. 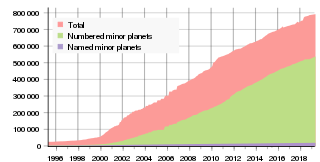 A minor planet is "lost" when today's observers cannot find it because they can no longer accurately predict its location with targeted observations and await serendipitous survey observations. This happens if the orbital elements of a minor planet are not known accurately enough, typically because the observation arc for the object is too short. Many previously lost asteroids were rediscovered in the 1980s and 1990s, but many minor planets are still lost.

(82075) 2000 YW134, provisional designation: 2000 YW134, is a resonant trans-Neptunian object and binary system, located in the outermost region of the Solar System. It was discovered on 26 December 2000, by astronomers with the Spacewatch survey at Kitt Peak Observatory near Tucson, Arizona. The reddish object stays in a rare 3:8 resonance with Neptune and measures approximately 216 kilometers (130 miles). Its 75-kilometer sized companion was discovered by the Hubble Space Telescope in October 2002. As of 2021, neither the primary body nor its satellite have been named.

(523639) 2010 RE64, provisional designation 2010 RE64, is a trans-Neptunian object in the scattered disc located in the outermost region of the Solar System, approximately 570 kilometers (350 miles) in diameter. It was discovered on 11 July 2010 by the Pan-STARRS-1 survey at the Haleakala Observatory, Hawaii, in the United States.

(589683) 2010 RF43, provisionally designated: 2010 RF43, is a large trans-Neptunian object orbiting in the scattered disc in the outermost regions of the Solar System. The object was discovered on 9 September 2010, by American astronomers David Rabinowitz, Megan Schwamb and Suzanne Tourtellotte at ESO's La Silla Observatory in northern Chile.

The Sormano Astronomical Observatory is an astronomical observatory north of Milan, Italy. Located near the Swiss border at 1000 meters altitude at the mountain village of Sormano in the pre-Alps, the observatory was privately funded by the Gruppo Astrofili Brianza and built in 1986.

Observations of minor planets as well as comets and natural satellites of the Solar System are made by astronomical observatories all over the world and reported to the Minor Planet Center (MPC), a service of the International Astronomical Union. The MPC maintains a data base that stores all observations submitted by these registered observatories. An astrometric record consists of the position, brightness and timestamp of an observed object, besides additional information. The database contains more than 200 million records gathered over the past two centuries.

A critical-list minor planet is a numbered minor planet whose orbit and position is especially in need of improvement.

2020 PP1 is a sub-kilometer asteroid, classified as a near-Earth object of the Apollo group, that is a temporary quasi-satellite of the Earth. There are over a dozen known Earth quasi-satellites, some of which switch periodically between the quasi-satellite and horseshoe co-orbital states.