The Smithsonian Astrophysical Observatory (SAO) is a research institute of the Smithsonian Institution, concentrating on astrophysical studies including galactic and extragalactic astronomy, cosmology, solar, earth and planetary sciences, theory and instrumentation, using observations at wavelengths from the highest energy gamma rays to the radio, along with gravitational waves.  Established in Washington, D.C., in 1890, the SAO moved its headquarters in 1955 to Cambridge, Massachusetts, where its research is a collaboration with the Harvard College Observatory (HCO) and the Harvard University Department of Astronomy. In 1973, the Smithsonian and Harvard formalized the collaboration as the Center for Astrophysics | Harvard & Smithsonian (CfA) under a single Director.

Samuel Pierpont Langley, the third Secretary of the Smithsonian, founded the Smithsonian Astrophysical Observatory on the south yard of the Smithsonian Castle (on the U.S. National Mall) on March 1,1890. The Astrophysical Observatory's initial, primary purpose was to "record the amount and character of the Sun's heat [1] ". Charles Greeley Abbot was named SAO's first director, and the observatory operated solar telescopes to take daily measurements of the Sun's intensity in different regions of the optical electromagnetic spectrum. In doing so, the observatory enabled Abbot to make critical refinements to the Solar constant, as well as to serendipitously discover Solar variability. It is likely that SAO's early history as a solar observatory was part of the inspiration behind the Smithsonian's "sunburst" logo, designed in 1965 by Crimilda Pontes. [2]

In 1955, the scientific headquarters of SAO moved from Washington, D.C. to Cambridge, Massachusetts to affiliate with the Harvard College Observatory (HCO). [1] Fred Lawrence Whipple, then the chairman of the Harvard Astronomy Department, was named the new director of SAO. The collaborative relationship between SAO and HCO therefore predates the official creation of the CfA by 18 years. SAO's move to Harvard's campus also resulted in a rapid expansion of its research program. Following the launch of Sputnik (the world's first human-made satellite) in 1957, SAO accepted a national challenge [3] to create a worldwide satellite-tracking network, collaborating with the United States Air Force on Project Space Track. [4]

With the creation of NASA the following year and throughout the space race, SAO led major efforts in the development of orbiting observatories and large ground-based telescopes, laboratory and theoretical astrophysics, as well as the application of computers to astrophysical problems.

SAO has operated a number of remote stations over the years. [5] [6]

The current director of the SAO is Lisa Kewley (2022 to present). There are currently about 170 research staff working at the SAO, including affiliated research staff. In addition, the SAO has about 120 postdoctoral researchers/fellows working in five competitive, associated fellowship programs: CfA, Clay, SMA, ITAMP, and Leon Van Speybroeck, or in support of a contract or grant. (Additional postdocs do research via Harvard fellowship programs or national/international fellowship awards); about 40% of the postdoctoral community are women and about 12% are from minority populations. SAO scientists can supervise Harvard Ph.D students, and in addition they typically supervise about 30 graduate students from other institutions who are pursuing Ph.D. theses at the SAO. About thirty undergraduate students intern at the SAO each year. All together there are about 950 staff (including administrative and management department employees) working at the Center.

Williamina Paton Stevens Fleming was a Scottish astronomer active in the United States. During her career, she helped develop a common designation system for stars and cataloged thousands of stars and other astronomical phenomena. Among several career achievements that advanced astronomy, Fleming is noted for her discovery of the Horsehead Nebula in 1888. 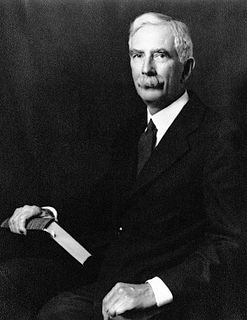 Sallie Louise Baliunas is a retired astrophysicist. She formerly worked at the Center for Astrophysics | Harvard & Smithsonian and was the Deputy Director of the Mount Wilson Observatory from 1991 to 2003.

Fred Lawrence Whipple was an American astronomer, who worked at the Harvard College Observatory for more than 70 years. Amongst his achievements were asteroid and comet discoveries, the "dirty snowball" hypothesis of comets, and the invention of the Whipple shield.

The Harvard College Observatory (HCO) is an institution managing a complex of buildings and multiple instruments used for astronomical research by the Harvard University Department of Astronomy. It is located in Cambridge, Massachusetts, United States, and was founded in 1839. With the Smithsonian Astrophysical Observatory, it forms part of the Center for Astrophysics | Harvard & Smithsonian.

The Oak Ridge Observatory, also known as the George R. Agassiz Station, is located at 42 Pinnacle Road, Harvard, Massachusetts. It was operated by the Center for Astrophysics | Harvard & Smithsonian as a facility of the Smithsonian Astrophysical Observatory (SAO) from 1933 until August 19, 2005. 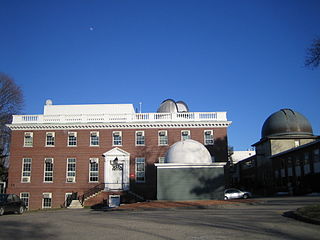 The Fred Lawrence Whipple Observatory is an American astronomical observatory owned and operated by the Smithsonian Astrophysical Observatory (SAO); it is their largest field installation outside of their main site in Cambridge, Massachusetts. It is located near Amado, Arizona on the summit, a ridge and at the foot of Mount Hopkins.

The MMT Observatory (MMTO) is an astronomical observatory on the site of Fred Lawrence Whipple Observatory. The Whipple observatory complex is located on Mount Hopkins, Arizona, US in the Santa Rita Mountains. The observatory is operated by the University of Arizona and the Smithsonian Institution, and has a visitor center in nearby Amado, Arizona. The MMTO is the home of the MMT, which has a primary mirror 6.5 m in diameter. The name comes from the six smaller mirrors originally used before the single primary mirror was installed in 1998. The primary mirror has a special lightweight honeycomb design made by the University of Arizona's Steward Observatory Mirror Laboratory. The MMT is housed in a building which allows the walls and roof around the telescope to be completely rolled back, allowing it to cool down very quickly in order to improve observation.

Bryan Malcolm Gaensler is an Australian astronomer based at the University of Toronto. He studies magnetars, supernova remnants, and magnetic fields. In 2014, he was appointed as Director of the Dunlap Institute for Astronomy & Astrophysics at the University of Toronto, after James R. Graham's departure. He is currently the co-chair of the Canadian 2020 Long Range Plan Committee with Pauline Barmby.

Hinode, formerly Solar-B, is a Japan Aerospace Exploration Agency Solar mission with United States and United Kingdom collaboration. It is the follow-up to the Yohkoh (Solar-A) mission and it was launched on the final flight of the M-V rocket from Uchinoura Space Center, Japan on 22 September 2006 at 21:36 UTC. Initial orbit was perigee height 280 km, apogee height 686 km, inclination 98.3 degrees. Then the satellite maneuvered to the quasi-circular sun-synchronous orbit over the day/night terminator, which allows near-continuous observation of the Sun. On 28 October 2006, the probe's instruments captured their first images.

Operation Moonwatch was an amateur science program formally initiated by the Smithsonian Astrophysical Observatory (SAO) in 1956. The SAO organized Moonwatch as part of the International Geophysical Year (IGY) which was probably the largest single scientific undertaking in history. Its initial goal was to enlist the aid of amateur astronomers and other citizens who would help professional scientists spot the first artificial satellites. Until professionally manned optical tracking stations came on-line in 1958, this network of amateur scientists and other interested citizens played a critical role in providing crucial information regarding the world's first satellites.

Herbert Gursky was the Superintendent of the Naval Research Laboratory's Space Science Division and Chief Scientist of the E.O. Hulburt Center for Space Research.

Lisa Jennifer Kewley is a Professor and Director of the ARC Centre of Excellence for All Sky Astrophysics in 3-D and ARC Laureate Fellow at the Australian National University College of Physical and Mathematical Sciences. Specialising in galaxy evolution, she won the Annie Jump Cannon Award in Astronomy in 2005 for her studies of oxygen in galaxies, and the Newton Lacy Pierce Prize in Astronomy in 2008. In 2014 she was elected a fellow of the Australian Academy of Science. In 2020 she received the James Craig Watson Medal. In 2021 she was elected as an international member of the National Academy of Sciences. In 2022 she became the director of the Center for Astrophysics | Harvard & Smithsonian.

George B. Field is an American astrophysicist.

Belinda Jane Wilkes is a Senior Astrophysicist at the Smithsonian Astrophysical Observatory (SAO) in Cambridge, Massachusetts, US, and former director of the Chandra X-ray Center.

Patrick Thaddeus was an American professor and the Robert Wheeler Willson Professor of Applied Astronomy Emeritus at Harvard University. He is best known for mapping carbon monoxide in the Milky Way galaxy and was responsible for the construction of the CfA 1.2 m Millimeter-Wave Telescope.

Giovanni Fazio is an American physicist at Center for Astrophysics | Harvard & Smithsonian. He is an astrophysicist who has initiated and participated in multiple observation programs.

Dr. Alexey Vikhlinin is a Russian-American astrophysicist notable for achievements in the astrophysics of high energy phenomenon, namely galaxy cluster cosmology and the design of space-based X-ray observatories. He is currently a Senior Astrophysicist and Deputy Associate Director of the High Energy Astrophysics Division at the Smithsonian Astrophysical Observatory, part of the Center for Astrophysics | Harvard & Smithsonian in Cambridge, Massachusetts. He is the Science and Technology Definition Team (STDT) Community Co-Chair for the Lynx X-ray Observatory, a NASA-funded Large Mission Concept Study under consideration by the 2020 Decadal Survey on Astronomy and Astrophysics.