The Smithsonian Gardens, a division of the Smithsonian Institution, is responsible for the "landscapes, interiorscapes, and horticulture-related collections and exhibits", which serve as an outdoor extension of the Smithsonian's museums and learning spaces in Washington, D.C. [2] Established in 1972 [3] as a groundskeeping and horticulture program, Smithsonian Gardens currently manages 180 acres of gardens on the National Mall, [3] 64,000 square feet of greenhouse production space, [3] and the Archives of American Gardens, a research collection of over 60,000 photographs and archival records covering American landscape history from the 1870s to the present. [3] [4] [5]

In 1972, the eighth secretary of the Smithsonian, S. Dillon Ripley, established the Office of Horticulture, with the intention of extending the Smithsonian's research and education efforts to its outdoor spaces. [6] Ripley hired James R. Buckler as its first director and the first horticulturalist at the Institution. [7] The office was created at a time when gardening was increasing in popularity across the United States, and its educational mission was buoyed by this surge of interest from the public. [4] Buckler's first assignment was to research and plan for the Victorian garden that was installed between the Smithsonian Castle and Independence avenue in celebration of the United States Bicentennial in 1976. The popularity of the Victorian garden would later provide design inspiration for the Enid A. Haupt Garden's central parterre. [8]

In 2009, the Smithsonian Institution changed the name from the Horticulture Services Division to the Smithsonian Gardens; [12] the change was announced to the public in 2010. [13]

The Smithsonian Gardens manage a number of gardens and landscapes, most of which are near the Smithsonian's museums on the National Mall. [14] These include:

Smithsonian Gardens practices integrated pest management as a way of controlling garden pests in all of the gardens and landscapes it manages. These methods are intended to produce as little hazard to people and the environment as possible. [4]

A plant production facility, completed in 2010, is located at the Museum Support Center in Suitland, Maryland serves as the base of production and maintenance of plant material for the gardens and horticultural exhibits throughout the Smithsonian Institution. [27] [28] It houses numerous horticultural specimens, interior display plants, and also includes a greenhouse devoted to nectar plants used for the Butterfly Pavilion at the National Museum of Natural History. [29]

Prior to the building of the Suitland greenhouse facility, [12] plants were cultivated in 11 greenhouses located on the grounds of the U.S. Soldiers' and Airmen's Home in Washington, D.C. [30]

The Smithsonian Orchid Collection, which began with five plants in 1974, [31] and has grown into a significant conservation project as additional orchids were donated to the Smithsonian for "safekeeping" and propagation. It now comprises over 8,000 plants [31] [32] representing 256 genera. [33] Specimens are featured in interior plant displays across the Smithsonian museums. [1]

The Archives of American Gardens is a research archive managed by Smithsonian Gardens, and is dedicated to providing landscape designers, historians, preservationists, students, and garden enthusiasts with access to photographic images and records that document over 6,300 historic and contemporary gardens throughout the United States. [5] [34] [35]

The Garden Furnishings and Horticultural Artifacts Collection provides historic insight into horticulture, floriculture, and garden design trends. Some of the antique cast-iron garden furnishings from this collection, including fountains, benches and urns, are exhibited in the Smithsonian gardens. [1]

The Smithsonian Institution, or simply, the Smithsonian, is a group of museums and education and research centers, the largest such complex in the world, created by the U.S. government "for the increase and diffusion of knowledge". Founded on August 10, 1846, it operates as a trust instrumentality and is not formally a part of any of the three branches of the federal government. The institution is named after its founding donor, British scientist James Smithson. It was originally organized as the United States National Museum, but that name ceased to exist administratively in 1967. 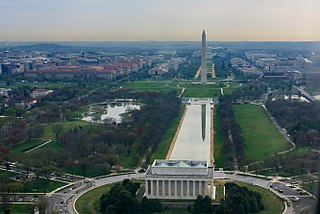 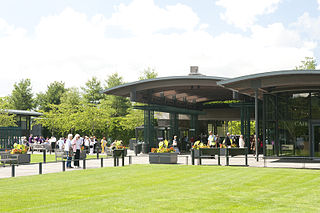 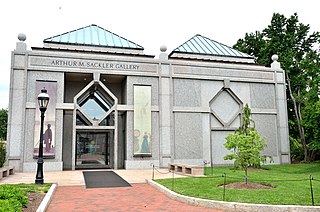 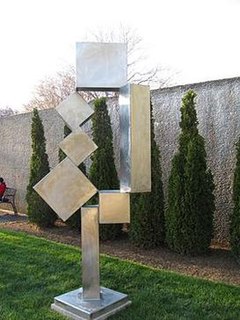 Sidney Dillon Ripley II was an American ornithologist and wildlife conservationist. He served as secretary of the Smithsonian Institution for 20 years, from 1964 to 1984, leading the institution through its period of greatest growth and expansion. For his leadership at the Smithsonian, he was awarded the Presidential Medal of Freedom by Ronald Reagan in 1985. 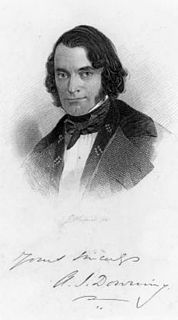 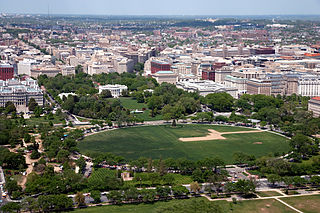 The Ellipse is a 52-acre (21 ha) park south of the White House fence and north of Constitution Avenue and the National Mall in Washington, D.C. The Ellipse is also the name of the five-furlong (1.0 km) circumference street within the park. The entire park, which features monuments, is open to the public and is part of President's Park. The Ellipse is the location for many annual events.

The American Horticultural Society (AHS) is a nonprofit, membership-based organization that promotes excellence in American horticulture. It is headquartered at River Farm in Alexandria, Virginia. 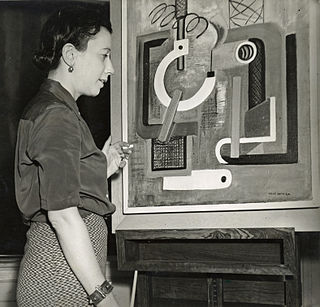 Irene Rice Pereira was an American abstract artist, poet and philosopher who played a major role in the development of modernism in the United States. She is known for her work in the genres of geometric abstraction, abstract expressionism and lyrical abstraction, as well as her use of the principles of the Bauhaus school. Her paintings and writings were significantly influenced by the complex intellectual currents of the 20th century. 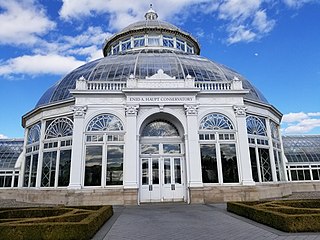 The Enid A. Haupt Conservatory is a greenhouse at the New York Botanical Garden (NYBG) in the Bronx, New York, United States. The conservatory was designed by Lord & Burnham Co. in the Italian Renaissance style. Its major design features are inspired by the Palm House at the Royal Botanic Gardens at Kew, and Joseph Paxton's Crystal Palace.

Enid Annenberg Haupt was an American publisher and philanthropist whose gifts supported horticulture, the arts, architectural and historic preservation, and cancer research. She has been described as "the greatest patron American horticulture has ever known" by Gregory Long, the president of the New York Botanical Garden.

Uncle Beazley is a life-size fiberglass statue of a triceratops by Louis Paul Jonas. It is located near Lemur Island in the National Zoological Park in Northwest Washington, D.C.

The Andrew Jackson Downing Urn, also known as the Downing Urn, is a memorial and public artwork located in the Enid A. Haupt Garden of the Smithsonian Institution on the National Mall in Washington, D.C. 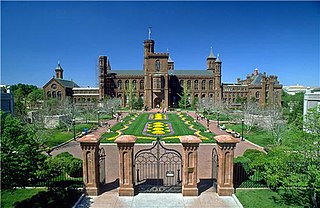 The Enid A. Haupt Garden is a 4.2 acre public garden in the Smithsonian complex, adjacent to the Smithsonian Institution Building on the National Mall in Washington, D.C. It was designed to be a modern representation of American Victorian gardens as they appeared in the mid to late 19th century. It replaced an existing Victorian Garden which had been built to celebrate the nation's Bicentennial in 1976.

Perry Hunt Wheeler was an American landscape architect who is primarily known for several garden projects in Washington, D.C., including the White House Rose Garden. He was born in Cordele, Georgia to John L. and Sarah Wheeler. He began his post-secondary education at Emory College, but soon transferred to the University of Georgia where he earned a Bachelor of Fine Arts in 1937. He went on to earn a graduate degree in landscape architecture in 1938 from Harvard University.

Lester Albertson Collins (1914–1993) was an American landscape architect. He studied landscape architecture at Harvard, including studies of gardens in East Asia in 1940. After World War II, he began to teach as a professor at Harvard. Collins traveled to Japan in 1953 to work for a year on the translation of an ancient Japanese book. In 1954 he settled in Washington, D.C., and worked for the firm Simonds & Simonds in Pittsburgh. He worked on town plans, campus plans, and public gardens such as the Hirshhorn Sculpture Garden. Over 55 years, he developed and directed the Innisfree Garden in Millbrook, New York.