The Botanic Garden is supervised by the Congress through the Architect of the Capitol, who is responsible for maintaining the grounds of the United States Capitol. The USBG is open every day of the year, including federal holidays. It is the oldest continually-operating botanic garden in the United States.

The Columbian Institute for the Promotion of Arts and Sciences in Washington, DC first suggested the creation of the Botanic Garden in 1816. In 1820 it was given land by an act of Congress. The land was located west of the Capitol extending from First Street to Third Street between Pennsylvania and Maryland Avenues. The facility ceased to operate in 1837 when the society stopped holding meetings. However it was re-instituted in 1842 when the Wilkes expedition of the South Seas brought back a collection of plants. [1]

In 1838, Charles Wilkes set out on the United States Exploring Expedition commissioned by Congress to circumnavigate the globe and explore the Pacific Ocean. During this trip (the "Wilkes Expedition"), Wilkes collected live and dried specimens of plants and was one of the first to use wardian cases to maintain live plants on long voyages. Wilkes returned in 1842 with a massive collection of plants previously unknown in the United States.

The dried specimens comprised the core of what is now the National Herbarium, an herbarium curated by the Smithsonian Institution's National Museum of Natural History. The live specimens and seeds came to be housed in the Old Patent Office greenhouse, and were cared for there until 1850. At that time, a botanic garden was built to house the collection in front of the Capitol, where the Capitol reflecting pool is now located.

The building was closed for renovations on September 1, 1997, and reopened to the public on December 11, 2001. At the time of closure for renovation, plants in the collection were either placed in storage at the USBG Production Facility, retired to greenhouses in Florida, or composted.

The USBG proper consists of three locations: the Conservatory, Bartholdi Park, and the Production Facility.

The Conservatory is a conservatory housed in a Lord & Burnham greenhouse. It is divided into separate rooms, each simulating a different habitat:

Except for the Hawaiian house, the galleries, and south Lobby none of the conservatory has air conditioning. Each room is closely monitored by a computer-operated sensors to maintain the environment best suited to the plants in that room. Humidity, sunlight and temperature are regulated by means of a misting system, retractable shades and levered windows. All plants are watered daily by hand. Construction was completed on the 3-acre (12,000 m2)National Garden on the Botanic Garden's west border, in October 2006 and the garden includes a regional garden of plants native to the Atlantic Coastal Plain and Piedmont, a rose garden, a butterfly garden, and the First Ladies Water Garden, a water garden in memory of the First Ladies of the United States.The National Garden construction was funded by the National Fund for the U.S. Botanic Garden which now exists as a 'friends group'.

Bartholdi Park lies just south of the Conservatory, across Independence Avenue. It is named for the Bartholdi Fountain in the garden's center designed by Frédéric Bartholdi. One of the goals of this garden is to provide inspiration and ideas for home gardeners who visit it. It displays a variety of small structured and non-structured gardens, and infuses color, shape, and planting themes. One section of the garden is certified as a National Wildlife Federation Backyard Wildlife Habitat. The Park also houses the administrative building for the United States Botanic Garden.

The Production Facility in southwest D.C. is used for growing and storing plants for propagation, for collection maintenance, or for display in upcoming annual shows.

The USBG participates in CITES (the Convention on International Trade in Endangered Species), which means that it cares for plants seized by Customs. It specializes in orchids and succulents.

There are four plants in the garden that are believed to be directly related to the original Wilkes Expedition.

Fairchild Tropical Botanic Garden is an 83-acre (34 ha) botanic garden with extensive collections of rare tropical plants including palms, cycads, flowering trees, and vines. It is located in the city of Coral Gables, Miami-Dade County, Florida, United States, just south of Miami, surrounded at the south and west by Matheson Hammock Park. 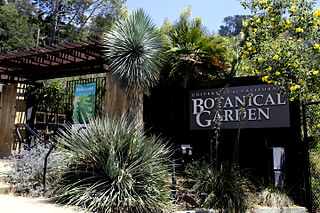 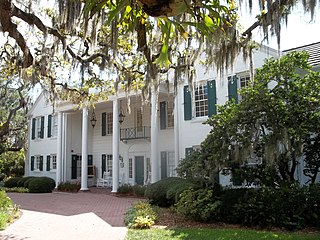 The Marie Selby Botanical Gardens is a 15-acre (6.1 ha) botanical garden located at 900 South Palm Avenue in Sarasota, Florida. The Gardens are located on the grounds of the former home of Marie and William Selby. 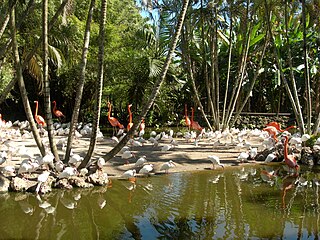 Flamingo Gardens is a 60-acre (24 ha), Tropical Botanic Garden and Everglades Wildlife Sanctuary, aviary and zoo, located just west of Fort Lauderdale, Florida and north of Miami at 3750 South Flamingo Road, Davie, Florida, United States. It is open to the public for a fee. 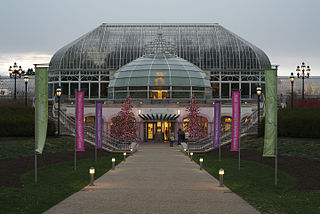 Oak Park Conservatory is a conservatory and botanical garden located at 615 Garfield Street in the Chicago suburb of Oak Park, Illinois, United States. It is open daily with restricted hours; admission is free, but a donation is suggested.

The University of Michigan Matthaei Botanical Gardens includes botanical gardens, natural areas with trails, and several research-quality habitats. The conservatory is popular year round. The public entrance is at 1800 North Dixboro Road in Ann Arbor, Michigan. The grounds are open every day, but trails are not maintained in the winter. The conservatory, garden store, and lobby are open 7 days a week: Mon., Tues., and Thurs. - Sun., 10:00 am–4:30 pm; Wednesdays 10 am-8 pm. The building complex is only closed on three holidays a year. The institution's main web site with updated information is Matthaei Botanical Gardens.

The University of Illinois Conservatory and Plant Collection is a 2,000-square-foot (190 m2) conservatory and botanical garden located in the Plant Sciences Laboratory Greenhouses, on the University of Illinois at Urbana–Champaign campus, 1201 South Dorner Drive, Urbana, Illinois. The conservatory is generally open to the public daily when the university is in session, though it may be closed for classes, research, or special events. 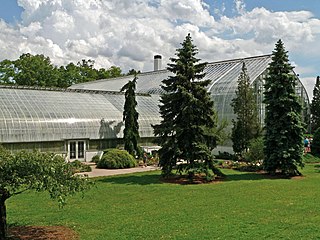 The Irwin M. Krohn Conservatory is a conservatory located in Eden Park within Cincinnati, Ohio in the United States. 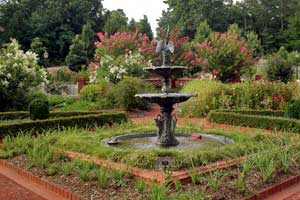 The State Botanical Garden of Georgia is a botanical garden of 313 acres in the United States, with a conservatory operated by the University of Georgia. It is located at 2450 South Milledge Avenue, Athens, Georgia.

Encephalartos woodii, Wood's cycad, is a rare cycad in the genus Encephalartos, and is endemic to the oNgoye Forest of KwaZulu-Natal, South Africa. It is one of the rarest plants in the world, being extinct in the wild with all specimens being clones of the type. The specific and common name both honour John Medley Wood, curator of the Durban Botanic Garden and director of the Natal Government Herbarium of South Africa, who discovered the plant in 1895.

The Old Botanical Garden of Göttingen University, with an area of 4.5 hectares, is an historic botanical garden maintained by the University of Göttingen. It is located in the Altstadt at Untere Karspüle 1, adjacent to the city wall, Göttingen, Lower Saxony, Germany, and open daily.

The Botanische Gärten der Friedrich-Wilhelms-Universität Bonn, also known as the Botanischer Garten Bonn, is a botanical garden and arboretum maintained by the University of Bonn. It is located at Meckenheimer Allee 171, Bonn, North Rhine-Westphalia, Germany, and open except Saturdays in the warmer months; admission is free on weekdays.

The Durban Botanic Gardens is situated in the city of Durban, KwaZulu-Natal, South Africa. It is Durban's oldest public institution and Africa's oldest surviving botanical gardens. The gardens cover an area of 15 hectares in a subtropical climate.

The Bali Botanic Garden is the largest botanic garden in Indonesia and is located in the mountainous region of Bedugul, central Bali, around 90 minutes drive north of Denpasar. The Garden was established on 15 July 1959 and is situated around 1300 metres above sea level overlooking Bratan Lake and the Ulun Danu Temple on the slopes of Tapak Hill. The Garden is a centre for botanical research, conservation, education and recreation. It is operated by the Indonesian Institute of Sciences (LIPI).