The composition and powers of the House are established in Article One of the Constitution. The major power of the House is to pass federal legislation that affects the entire country, although its bills must also be passed by the Senate and further agreed to by the President before becoming law (unless both the House and Senate re-pass the legislation with a two-thirds majority in each chamber). Each state receives representation in the House in proportion to its population but is entitled to at least one representative. The total number of voting representatives is fixed by law at 435. [3] Each representative serves for a two-year term. The Speaker of the United States House of Representatives, traditionally the leader of the majority party, is the presiding officer of the chamber, elected by the members of the House.

Newton Leroy "Newt" Gingrich is an American politician and author who served as the 50th Speaker of the United States House of Representatives from 1995 to 1999. A member of the Republican Party, he was the U.S. Representative for Georgia's 6th congressional district serving north Atlanta and nearby areas from 1979 until his resignation in 1999. In 2012, Gingrich unsuccessfully ran for the Republican nomination for President of the United States.

Phyllis Stewart Schlafly was an American conservative activist and author. She held traditional conservative social and political views, opposed feminism, gay rights and abortion, and successfully campaigned against ratification of the Equal Rights Amendment to the U.S. Constitution. She was opposed in turn by moderates and liberals for her attitudes on sex, gender roles, homosexuality and a number of other issues. More than three million copies of her book, A Choice Not an Echo (1964), a polemic against Republican leader Nelson Rockefeller, were sold or distributed for free. Schlafly co-authored books on national defense and was critical of arms control agreements with the Soviet Union. In 1972, Schlafly founded the Eagle Forum, a conservative political interest group, and remained its chair and CEO until her death in 2016 while staying active in traditional conservative causes.

Richard Keith Armey is an American economist and politician. He was a U.S. Representative from Texas's 26th congressional district (1985–2003) and House Majority Leader (1995–2003). He was one of the engineers of the "Republican Revolution" of the 1990s, in which Republicans were elected to majorities of both houses of Congress for the first time in four decades. Armey was one of the chief authors of the Contract with America. Armey is also an author and former economics professor. After his retirement from Congress, he has worked as a consultant, advisor, and lobbyist. 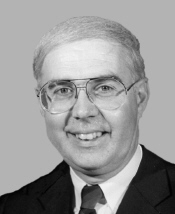 This is a list of books and scholarly articles by and about Hillary Clinton, as well as columns by her.

Jonathan Cilley was a member of the U.S. House of Representatives from Maine. He served part of one term in the 25th Congress, and died as the result of a wound sustained in a duel with another Congressman, William J. Graves of Kentucky.

An election for a seat in the United States House of Representatives took place in California's 12th congressional district on November 5, 1946, the date set by law for the elections for the 80th United States Congress. In the 12th district election, the candidates were five-term incumbent Democrat Jerry Voorhis, Republican challenger Richard Nixon, and former congressman and Prohibition Party candidate John Hoeppel. Nixon was elected with 56% of the vote, starting him on the road that would, almost a quarter century later, lead to the presidency.

This bibliography of Barack Obama is a list of written and published works, both books and films, about Barack Obama, 44th President of the United States.

This is a bibliography of U.S. congressional memoirs by former and current U.S. senators.

Fergus M. Bordewich is an American writer, historian, and editor living in San Francisco. He is the author of eight nonfiction books, including a memoir, and an illustrated children's book.

This is a bibliography of literature treating the topic of criticism of Islam, sorted by source publication and the author's last name.

"Niggers in the White House" is a poem that was published in newspapers around the United States between 1901 and 1903. The poem was written in reaction to an October 1901 White House dinner hosted by Republican President Theodore Roosevelt, who had invited Booker T. Washington—an African-American presidential adviser—as a guest. The poem reappeared in 1929 after First Lady Lou Hoover, wife of President Herbert Hoover, invited Jessie De Priest, the wife of African-American congressman Oscar De Priest, to a tea for congressmen's wives at the White House. The identity of the author—who used the byline "unchained poet"—remains unknown. 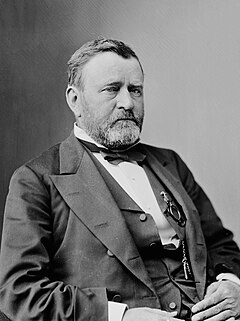 Ulysses S. Grant was the 18th president of the United States (1869–1877) following his success as military commander in the American Civil War. Under Grant, the Union Army defeated the Confederate military, secession and the war, which ended with the surrender of Robert E. Lee's army at Appomattox Court House. As president, Grant led the Radical Republicans in their effort to eliminate vestiges of Confederate nationalism and slavery, protect African American citizenship, and pursued Reconstruction in the former Confederate states. In foreign policy, Grant sought to increase American trade and influence, while remaining at peace with the world. Although his Republican Party split in 1872 as reformers denounced him, Grant was easily reelected. During his second term the country's economy was devastated by the Panic of 1873, while investigations exposed corruption scandals in the administration. While still below average, his reputation among scholars has significantly improved in recent years because of greater appreciation for his commitment to civil rights, moral courage in his prosecution of the Ku Klux Klan, and enforcement of voting rights. 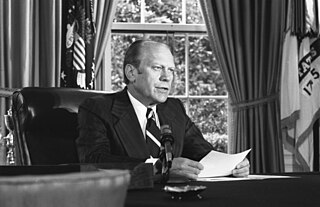 The pardon of Richard Nixon was a presidential proclamation issued by President of the United States Gerald Ford on September 8, 1974. By it, Ford granted to Richard Nixon, his predecessor, a full and unconditional pardon for any crimes that he might have committed against the United States as president. In particular, the pardon covered Nixon's actions during the Watergate scandal. In a televised broadcast to the nation, Ford, who had succeeded to the presidency upon Nixon's resignation, explained that he felt the pardon was in the best interests of the country and that the Nixon family's situation was "a tragedy in which we all have played a part. It could go on and on and on, or someone must write the end to it. I have concluded that only I can do that, and if I can, I must."

The following is a list of important scholarly resources related to Andrew Jackson.