The United States Constitution gives the Senate the power to expel any member by a two-thirds vote. [1] This is distinct from the power over impeachment trials and convictions that the Senate has over executive and judicial federal officials: the Senate ruled in 1798 that senators could not be impeached, but only expelled, while debating a possible impeachment trial for William Blount, who had already been expelled. [2]

Expulsion has not occurred since the Civil War. [1] Censure, a lesser punishment which represents a formal statement of disapproval, has been more common in the 19th century. Although censure carries no formal punishment, only one senator (Benjamin R. Tillman) of the nine to be censured has ever been re-elected. Unlike the House of Representatives, which also disciplines by reprimand, a censure is the weakest form of discipline the Senate issues.

Expulsion proceedings not resulting in expulsion

Many expulsion proceedings have been begun by the Senate that did not lead to expulsion. In most cases, the expulsion failed to secure the necessary two-thirds vote, in other cases the senator in question resigned while proceedings were taking place, and some proceedings ended when a senator died or his term expired. 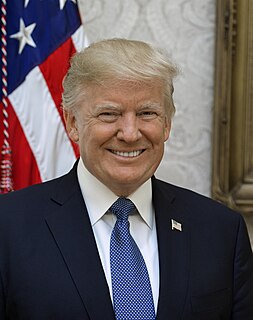 Impeachment is the process by which a legislative body addresses legal charges against a government official.

Abscam was an FBI sting operation in the late 1970s and early 1980s that led to the convictions of seven members of the United States Congress, among others. The two-year investigation initially targeted trafficking in stolen property and corruption of prominent businessmen, but later evolved into a public corruption investigation. The FBI was aided by the Justice Department and a convicted con-man in videotaping politicians accepting bribes from a fictitious Arabian company in return for various political favors. 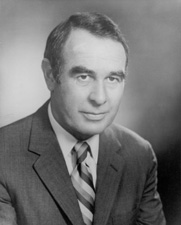 Impeachment in the United States is the process by which a legislature brings charges against a civil officer of government for crimes alleged to have been committed, analogous to the bringing of an indictment by a grand jury. Impeachment may occur at the federal level or the state level. The federal House of Representatives can impeach federal officials, including the president or vice-president, with a simple majority of the House members present or such other criteria as the House adopts in accordance with Article One, Section 2, Clause 5 of the United States Constitution. Most state legislatures can impeach state officials, including the governor, in accordance with their respective state constitution. 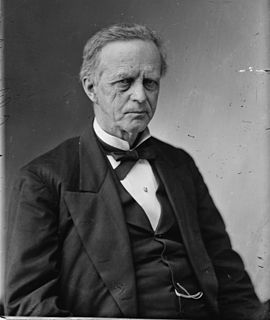 Lyman Trumbull was a United States Senator from Illinois and the co-author of the Thirteenth Amendment to the United States Constitution.

Joseph Ralph Burton was a lawyer and United States Senator from the state of Kansas. 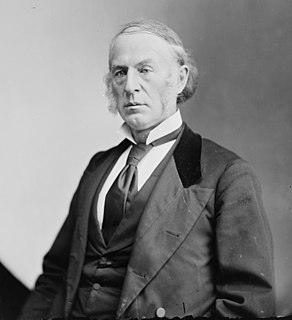 James Willis Patterson was an American politician and a United States Representative and Senator from New Hampshire.

Austin John Murphy was a Democratic member of the U.S. House of Representatives from Pennsylvania from 1977 to 1995. 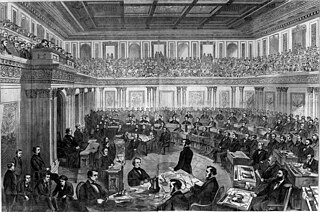 The impeachment of Andrew Johnson was initiated on February 24, 1868, when the United States House of Representatives resolved to impeach Andrew Johnson, the 17th president of the United States, for "high crimes and misdemeanors", which were detailed in 11 articles of impeachment. The primary charge against Johnson was that he had violated the Tenure of Office Act, passed by Congress in March 1867, over his veto. Specifically, he had removed from office Edwin M. Stanton, the secretary of war—whom the act was largely designed to protect—and attempted to replace him with Brevet Major General Lorenzo Thomas.

Donald Trump, the 45th president of the United States, was impeached for the second time by the House of Representatives on January 13, 2021. The House adopted one article of impeachment against Trump: incitement of insurrection. He is the only U.S. president to be impeached twice. Trump was impeached after he attempted to overturn the 2020 presidential election results and his declarations incited a deadly riot in which his supporters stormed the Capitol in Washington, D.C., while the Congress was convened to count the electoral votes and thus formalize the victory of Joe Biden, who defeated Trump in the 2020 election.