Senatorial courtesy is a long-standing unwritten, unofficial, and nonbinding political custom (or constitutional convention) in the United States describing the tendency of U.S. senators to support a Senate colleague when opposing the appointment to federal office of a nominee from that Senator's state. [1] The practice is motivated by a general sense of collegiality among Senators and the assumption that a Senate colleague will have the best first-hand knowledge of the personal character and qualifications of nominees from his or her own state. It is also viewed as an "important source of political patronage" [2] for U.S. senators.

The precedent that developed into senatorial courtesy began with the August 9, 1789, nomination by President George Washington of Benjamin Fishbourn to the post of naval officer for the port of Savannah, Georgia. Given the infancy of the U.S. federal government and the need to populate the executive offices the First Congress was busy creating in 1789, the Senate had previously given prompt consent to the president's nominations to federal posts. When debate moved to consider the Fishbourn nomination three days later, both senators from Georgia objected, with Senator James Gunn rising to speak against the nomination—likely because of his own personal animosities toward the nominee. Consequently, the Senate deferred to the Senator from Georgia and rejected the nomination. [3]

This custom generally affords each senator some role in the process of nomination and confirmation of federal office holders, conditional on a matching political party affiliation between the president and the senator. Where each is of the same political party, the president will consult the senator prior to submitting a nomination for any federal posting geographically tied to that senator's state. [4] Such consultation can help the president avoid a politically costly and embarrassing rejection of the nominee. This consultation can be one of soliciting the senator for recommendations regarding whom the president should nominate, whereby the senator can reward political supporters from their state who are qualified for the position, or of quietly seeking the senator's advance approval or rejection of a nominee the president already has in mind for the vacancy prior to making that nomination. As U.S. Attorney General Robert F. Kennedy described the enterprise, "Basically, it's senatorial appointment with the advice and consent of the president." [5] While not afforded the advisory role given to senators of the president's party, the blue slip policy of the Senate Judiciary Committee guarantees that even senators of the opposition party receive at least a consultative role regarding appointments of federal district and appellate court judges, U.S. attorneys, and federal marshals whose jurisdictions are geographically tied to the senator's state. [6]

Senatorial courtesy generally does not apply in the appointment of justices of the U.S. Supreme Court. However, that has not prevented some U.S. senators from using the custom to successfully block Supreme Court nominees from their state. During the second administration of President Grover Cleveland, the death of Associate Justice Samuel Blatchford ignited a political fight between Cleveland and Senator David B. Hill of New York. Cleveland nominated in turn William B. Hornblower and Wheeler Hazard Peckham to fill the vacancy, only to have Hill block each nominee—both Hornblower and Peckham had previously opposed Hill's political machine in New York. In addition to the custom, the Senate afforded Hill great deference since the vacant bench seat had been held by appointees from New York since the Jefferson administration. Cleveland then leveraged a separate Senate custom—the custom of "all but automatic approval of senatorial colleagues" [7] —to sidestep Hill's opposition by nominating sitting U.S. senator from Louisiana Edward Douglass White. [8] 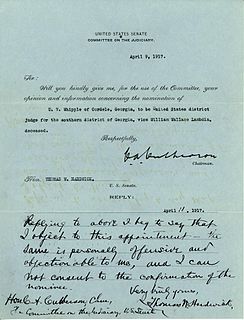 A blue slip or blue-slipping refers to two distinct legislative procedures in the United States Congress.

The Thurmond rule in U.S. politics posits that at some point in a U.S. presidential election year, the U.S. Senate will not confirm the president's nominees to the federal judiciary except under certain circumstances. The basic premise is that the President and the Senate majority are of opposite political ideologies and as such the judiciary committee will not allow an appointee to receive a floor vote from the entire Senate during a presidential election year.

The nomination, confirmation, and appointment of Justices to the Supreme Court of the United States involves several steps set forth by the United States Constitution, which have been further refined and developed by decades of tradition. Candidates are nominated by the President of the United States and must face a series of hearings in which both the nominee and other witnesses make statements and answer questions before the Senate Judiciary Committee, which can vote to send the nomination to the full United States Senate. Confirmation by the Senate allows the President to formally appoint the candidate to the court. The Constitution does not set any qualifications for service as a Justice, thus the President may nominate any individual to serve on the Court.

U.S. President Barack Obama nominated over 400 individuals for federal judgeships during his presidency. Of these nominations, Congress confirmed 329 judgeships, 173 during the 111th & 112th Congresses and 156 during the 113th and 114th Congresses.

Senatorial courtesy is an unwritten rule practiced in the Senate of the U.S. state of New Jersey under which a State Senator can indefinitely block consideration of a nomination by the Governor of New Jersey for a gubernatorial nominee from the Senator's home county, without being required to provide an explanation. While the practice is infrequently invoked, it has brought calls for legislation that would forbid its use.

John Calhoun Shields was an American jurist who served as Chief Justice of the Arizona Territorial Supreme Court. Granted a recess appointment by President Grover Cleveland, he is the only nominee to the Arizona territorial bench who was denied senate confirmation. 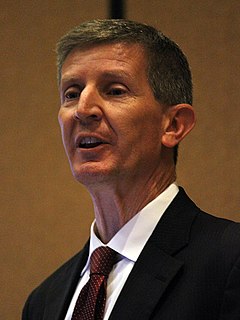 Britt Cagle Grant is an American attorney and judge who is a United States Circuit Judge of the United States Court of Appeals for the Eleventh Circuit. She is a former Justice of the Supreme Court of Georgia.

President Donald Trump entered office with a significant number of judicial vacancies, including a Supreme Court vacancy due to the death of Antonin Scalia in February 2016. During the first eight months of his presidency, he nominated approximately 50 judges, a significantly higher number than any other recent president had made by that point in his presidency. By June 24, 2020, 200 of his Article III nominees had been confirmed by the United States Senate. According to multiple media outlets, Trump significantly impacted the composition of the Supreme Court and lower courts during his tenure.