Physicians in the United States Congress

Physicians in the United States Congress have been a small minority of the members of Congress, with fluctuating numbers over the years. The number of physicians serving and running for Congress has risen over the last 50 years from 5 in 1960, down to a nadir of 2 in 1990, to a maximum of 21 in 2013 and a decrease to 14 in 2017. Possible explanations for this development have been increasing health care spending, increased health care reform debate in the United States, leading up to the Healthcare Reform Act.

In public opinion research by the American Medical Association (AMA) from 2013, voters rated "understanding of the problems facing our healthcare industry, including the bureaucratic red tape that is strangling health care providers and driving up the cost of health care for most Americans" as the most convincing statement of a physician candidate for Congress. Physicians in Congress have received large campaign contributions from health care trade associations and from peers through physician associations such as the AMA.

Possible explanations for the increase since the 1990s have been increasing health care spending, [6] increased health care reform debate in the United States, leading up to the Healthcare Reform Act. [7]

Tom Coburn said, "physicians have watched the profession undergo tremendous realignments that are shifting doctors' responsibilities away from patient care, changes they attribute to the government's inefficacy". [7] Jim McDermott was quoted as saying "They want to have their hands right there on the handle so they can pull it one way or another." [7] Physicians "balked at the idea of lawmakers with no medical experience making decisions that could upend the profession", per Andy Harris. [7]

Kelley Paul, wife of Rand Paul said in 2015 when he made his 2016 White House bid, "Being a physician gives Rand a unique perspective in Washington, simply because he's trained to diagnose a problem and find a solution." [8]

In 2013, three quarters of physicians in Congress were Republican, [4] and 80% as of 2017. [5] As a possible reason Jim McDermott offered, "politically conservative physicians were more likely to chafe at the direction of changes in health care, with greater oversight by the government and a more regulated role for the private sector. It's a fundamental debate about what is in the public good." [7]

During the 2016 cycle the AMA political action committee spent $2 million with "direct contributions to 348 physician-friendly [Congressional] candidates (58% Republican and 46% Democratic)". [9]

In 2013, the AMA funded 3 focus groups of voters across the country and an online survey to research public opinion on physicians as Congressional candidates. The top scoring potential message for a physician was to link back to health care expertise "Because physicians work in health care on a daily basis, they bring a clear understanding of the problems facing our healthcare industry, including the bureaucratic red tape that is strangling health care providers and driving up the cost of health care for most Americans." [6]

Senate candidates in 2014 included "an obstetrician in North Carolina, Milton R. Wolf, a radiologist in Kansas, a liver disease specialist in Louisiana, and Representatives Paul Broun and Phil Gingrey in Georgia, all of them Republicans. At least 26 more physicians were running for the House, some for re-election." per a New York Times article from March 2014. [7]

From 2017 to 2019 there were 16 physicians in U.S. Congress, all were male and 14 were members of the Republican party. There was also one podiatrist, one dentist, and one optometrist. [5]

Physicians in political positions outside Congress

In the United States, a political action committee (PAC) is a 527 organization that pools campaign contributions from members and donates those funds to campaigns for or against candidates, ballot initiatives, or legislation. The legal term PAC has been created in pursuit of campaign finance reform in the United States. This term is quite specific to all activities of campaign finance in the United States. Democracies of other countries use different terms for the units of campaign spending or spending on political competition. At the U.S. federal level, an organization becomes a PAC when it receives or spends more than $1,000 for the purpose of influencing a federal election, and registers with the Federal Election Commission (FEC), according to the Federal Election Campaign Act as amended by the Bipartisan Campaign Reform Act of 2002. At the state level, an organization becomes a PAC according to the state's election laws. 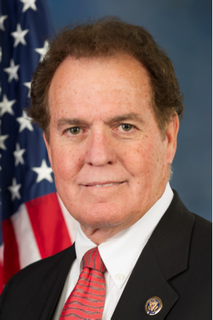 John Phillip Gingrey is an American physician and former politician who served as a U.S. Representative for Georgia's 11th congressional district from 2003 to 2015. He is a member of the Republican Party (GOP). His district comprised the northwestern suburbs of Atlanta. Since leaving Congress, Gingrey has worked as a senior adviser at the District Policy Group in Washington, D.C., which is the lobbying arm of the Drinker Biddle law firm.

Frederick Stephen Upton is an American politician serving the U.S. Representative for Michigan's 6th congressional district, serving since 1987. The district, numbered as the 4th district from 1987 to 1993, is based in Kalamazoo and stretches along the Michigan-Indiana border in the southwestern part of the state. A member of the Republican Party and former Chairman of the Committee on Energy and Commerce, he has played a major role in shaping post-Obamacare health-care legislation.

Robert Randolph "Randy" Neugebauer is an American politician who was the U.S. Representative for Texas's 19th congressional district, having served from a special election in 2003 to 2017. He is a member of the Republican Party. The district includes a large swath of West Texas, including Lubbock and Abilene. According to a 2011 survey by the National Journal, Neugebauer was "the most conservative" member of the House. 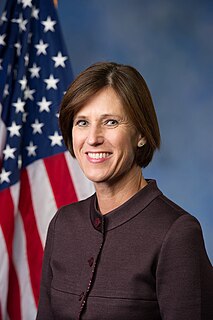 Marian Elaine "Mimi" Walters is an American businesswoman and politician. A Republican, she served from 2015 to 2019 as the U.S. Representative for California's 45th congressional district.

Andrew Peter Harris is an American politician and physician who has been the U.S. Representative for Maryland's 1st congressional district since 2011. He is currently the only Republican member of Maryland's congressional delegation. Harris previously served in the Maryland Senate. 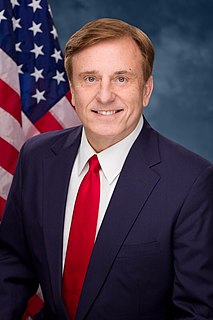 John Calvin Fleming Jr. is an American politician, physician, military veteran, and businessman. After leaving Congress in 2017, he served for two years in the administration as Deputy Assistant Secretary for Health Information Technology Reform and then served as Assistant Secretary of Commerce for Economic Development from March 2019 to 2020. In March 2020, he was appointed to a position in the White House as Assistant to the President for Planning and Implementation.

Timothy Alan Huelskamp is an American politician who was the U.S. Representative for Kansas's 1st congressional district from 2011 to 2017. Huelskamp, a member of the Republican Party, was rated the least bipartisan member of the House during the 114th Congress by The Lugar Center - McCourt school Bipartisan Index. Prior to entering Congress, he represented the 38th district of the Kansas Senate from 1997 until 2011. Huelskamp, who was known for his strong social conservatism, was the chairman of the House Tea Party Caucus from February 2015 until he left office in 2017. He ran for re-election in 2016 but was defeated in the Republican primary on August 2, 2016, by Roger Marshall. His term in the House ended on January 3, 2017. 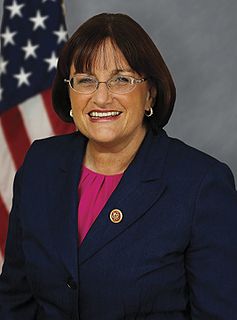 Ann L. McLane Kuster is an American politician, author and attorney serving as the U.S. Representative for New Hampshire's 2nd congressional district since 2013. A member of the Democratic Party, she is a lobbyist and non-profit consultant from Hopkinton, New Hampshire. 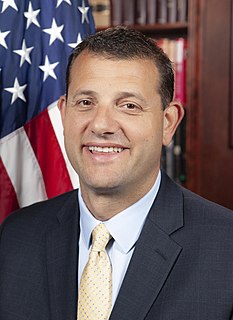 David Goncalves Valadao is an American politician and dairy farmer who is the U.S. Representative-elect for California's 21st congressional district, having defeated TJ Cox in a rematch in 2020 for his former office. He previously held the seat from 2013 to 2019. Before that, he served one term in the California State Assembly, representing the 30th district. He is a member of the Republican Party. In 2020, Valadao, Michelle Steel, and Young Kim became the first Republican congressional candidates to unseat incumbent House Democrats in California since 1994.

The Congressional Leadership Fund (CLF) is a Super PAC dedicated to electing Republicans to the U.S. House of Representatives. The Super PAC, which was closely linked to former House Speaker John Boehner and House GOP leadership, was founded in 2011 and spent nearly $10 million in the 2012 cycle electing Republican candidates. Following Boehner's resignation from the U.S. Congress and the election of Paul D. Ryan as Speaker of the House, Congressional Leadership Fund became closely linked to Ryan.

Americans for Responsible Solutions (ARS) was a United States non-profit organization and super PAC that supports gun control. The group's stated goal is "to encourage elected officials to stand up for solutions to prevent gun violence and protect responsible gun ownership." It typically supports Democratic politicians in elections. In 2016, the organization merged with the Law Center to Prevent Gun Violence to become Giffords.

Elise Marie Stefanik is an American politician serving as the U.S. Representative for New York's 21st congressional district since 2015. The district, the fifth-largest by land area east of the Mississippi River, covers most of the North Country, as well as most of the Adirondacks. It also includes some of the outer suburbs of Utica and the Capital District.

Thomas Charles MacArthur is an American former insurance executive and politician. He served as the U.S. Representative for New Jersey's 3rd congressional district from 2015 to 2019. A Republican, MacArthur served on the city council of Randolph, New Jersey, from 2011 through 2013, and as its mayor in 2013. He was elected to the U.S. House of Representatives in 2014. 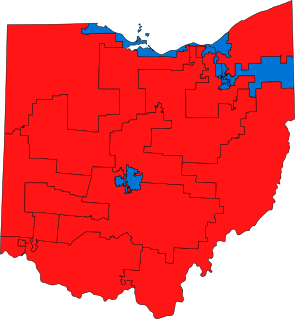 The 2018 United States House of Representatives elections in Michigan was held on November 6, 2018, to elect the 14 U.S. Representatives from the state of Michigan, one from each of the state's 14 congressional districts. The elections coincided with the elections of other offices, including a gubernatorial election, other elections to the House of Representatives, elections to the United States Senate, and various state and local elections. The filing deadline for candidates filing for the August 7 primary was April 24, 2018. Unless otherwise indicated, the Cook Political Report has rated the congressional races as safe for the party of the incumbent. 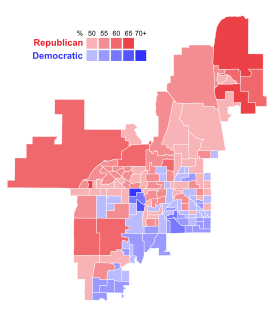