The concept serves to moderate the power of one branch of government by requiring the concurrence of another branch for selected actions. The expression is frequently used in weak executive systems where the head of state has little practical power, and in practice the important part of the passage of a law is in its adoption by the legislature.

In the United Kingdom, a constitutional monarchy, bills are headed:

BE IT ENACTED by the King's most Excellent Majesty, by and with the advice and consent of the Lords Spiritual and Temporal, and Commons, in this present Parliament assembled, and by the authority of the same, as follows:

This enacting formula emphasizes that although legally the bill is being enacted by the British monarchy (specifically, by the King-in-Parliament), it is not through his initiative but through that of Parliament that legislation is created.

The term "advice and consent" appears twice in the United States Constitution, both times in Article II, Section 2, Clause 2. First, the term is used in reference to the senate's role in the signing and ratification of treaties. Then, it is used to describe the Senate's role in the nomination and confirmation process for federal appointees.

This language was written at the Constitutional Convention as part of a delicate compromise concerning the balance of power in the federal government. Many delegates preferred to develop a strong executive control vested in the president, but others, worried about authoritarian control, preferred to strengthen the Congress. Requiring the president to gain the advice and consent of the Senate achieved both goals without hindering the business of government.

Under the Twenty-fifth Amendment, appointments to the office of vice president are confirmed by a majority vote in both houses of Congress, instead of just the Senate.

While several framers of the U.S. Constitution, such as Thomas Jefferson and James Madison, believed that the required role of the Senate is to advise the president after the nomination has been made by the president, [1] [2] Roger Sherman believed that advice before nomination could still be helpful. [3] President George Washington took the position that pre-nomination advice was allowable but not mandatory. [4] The notion that pre-nomination advice is optional has developed into the unification of the "advice" portion of the power with the "consent" portion, although several Presidents have consulted informally with Senators over nominations and treaties.

Typically, a congressional hearing is held to question an appointee prior to a committee vote. If the nominee is approved by the relevant committee, the nomination is sent to the full Senate for a confirmation vote. The actual motion adopted by the Senate when exercising the power is "to advise and consent". [5] [6] For appointments, a majority of Senators present are needed to pass a motion "to advise and consent". However, tactics have been used to require more than majority support to pass such a motion, including filibuster, where a three-fifths vote on a motion to end debate is required even to take a vote on the advise and consent motion.

On November 21, 2013, the Democratic Party, led by then-majority leader Harry Reid, overrode the filibuster of a nomination with a simple majority vote to change the rules. [7] As a result of the changed precedent, judicial nominees to federal courts and a president's executive-branch nominations can proceed to a confirmation vote by a simple majority vote of the Senate. However, Reid left the filibuster in place for Supreme Court nominees.

On February 13, 2016, Mitch McConnell, Senate Majority Leader of the Republican Party, said that the Senate would refuse to confirm a replacement for Supreme Court Justice Antonin Scalia until after the 2016 presidential election, an historic rebuke of President Obama’s authority and an extraordinary challenge to the practice of considering each nominee on his or her individual merits. Despite McConnell’s claim, no Senate leader had ever asserted such a right — and there was no precedent for a sitting president to hand over his power of high-court appointment at the request of any member of the legislative branch. [8]

In April 2017, McConnell and the Republican Party exercised the nuclear option in order to overcome Democratic opposition for Supreme Court nominations, confirming Associate Justice Neil Gorsuch to the Supreme Court, despite what might have otherwise been a successful Democratic filibuster.

The Tenure of Office Act was a United States federal law, in force from 1867 to 1887, that was intended to restrict the power of the president to remove certain office-holders without the approval of the U.S. Senate. The law was enacted March 2, 1867, over the veto of President Andrew Johnson. It purported to deny the president the power to remove any executive officer who had been appointed by the president with the advice and consent of the Senate, unless the Senate approved the removal during the next full session of Congress. 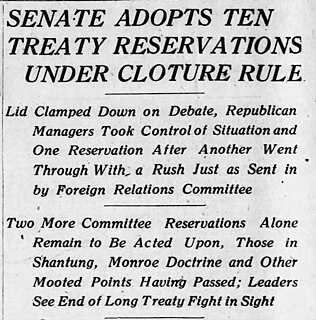 The federal government of the United States is the common government of the United States, a federal republic in North America, composed of 50 states, a city within a federal district, five major self-governing territories and several island possessions. The federal government, sometimes simply referred to as Washington, is composed of three distinct branches: legislative, executive, and judicial, whose powers are vested by the U.S. Constitution in the Congress, the president and the federal courts, respectively. The powers and duties of these branches are further defined by acts of Congress, including the creation of executive departments and courts inferior to the Supreme Court.

In the United States, a recess appointment is an appointment by the president of a federal official when the U.S. Senate is in recess. Under the U.S. Constitution's Appointments Clause, the President is empowered to nominate, and with the advice and consent (confirmation) of the Senate, make appointments to high-level policy-making positions in federal departments, agencies, boards, and commissions, as well as to the federal judiciary. A recess appointment under Article II, Section 2, Clause 3 of the Constitution is an alternative method of appointing officials that allows the temporary filling of offices during periods when the Senate is not in session. It was anticipated that the Senate would be away for months at a time, so the ability to fill vacancies in important positions when the Senate is in recess and unavailable to provide advice and consent was deemed essential to maintain government function, as described by Alexander Hamilton in No. 67 of The Federalist Papers. 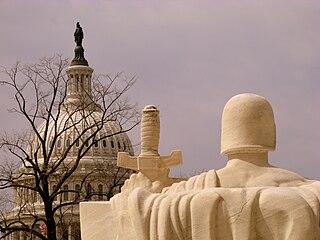 In the United States Senate, the nuclear option is a parliamentary procedure that allows the Senate to override a standing rule by a simple majority, rather than the two-thirds supermajority normally required to amend Senate rules.

The Gang of 14 was a bipartisan group of Senators in the 109th United States Congress who successfully, at the time, negotiated a compromise in the spring of 2005 to avoid the deployment of the so-called "nuclear option" by Senate Republican Majority over an organized use of the filibuster by Senate Democrats. The term alludes to the phrase "Gang of Four", used in China to refer to four ex-leaders blamed for the abuses during the rule of Mao Zedong.

Federalist No. 76, written by Alexander Hamilton, was published on April 1, 1788. The Federalist Papers are a series of eighty-five essays written to urge the ratification of the United States Constitution. These letters were written by Alexander Hamilton, James Madison, and John Jay under the name of Publius in the late 1780s. This paper discusses the arrangement of the power of appointment and the system of checks and balances. The title is "The Appointing Power of the Executive", and is the tenth in a series of 11 essays discussing the powers and limitations of the Executive branch. There are three options for entrusting power: a single individual, a select congregation, or an individual with the unanimity of the assembly. Of all of the options, Hamilton supports bestowing the president with the nominating power and the ratifying power to the senate in order to have a strategy with the least bias.

The Judicial and Bar Council of the Philippines is a constitutionally-created body that recommends appointees for vacancies that may arise in the composition of the Supreme Court, other lower courts, and the Legal Education Board, and in the offices of the Ombudsman, Deputy Ombudsman and the Special Prosecutor.

A filibuster is a tactic used by a minority group of members of the U.S. Senate who oppose and prevent the passage of a bill, despite the bill's having enough supporters to pass it. The tactic involves taking advantage of the rule that 60 votes are needed to stop debate on a bill, so that it can proceed to a vote. Debate on a bill can last indefinitely and must conclude before the bill can be voted on and passed. Therefore, an opposing minority of at least 41 members can prevent the passage of a bill, even if a supporting majority of at least 51 members could later pass it. 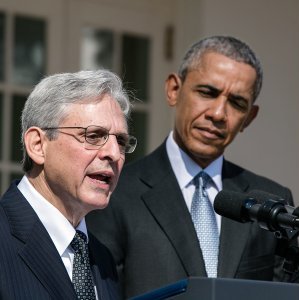 On March 16, 2016, President Barack Obama nominated Merrick Garland for Associate Justice of the Supreme Court of the United States to succeed Antonin Scalia, who had died one month earlier. At the time of his nomination, Garland was the Chief Judge of the United States Court of Appeals for the District of Columbia Circuit. 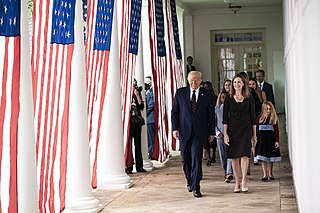 On September 26, 2020, President Donald Trump announced the nomination of Amy Coney Barrett to the position of Associate Justice of the Supreme Court of the United States to fill in the vacancy left by the death of Ruth Bader Ginsburg. At the time of her nomination, Barrett was a Judge of the United States Court of Appeals for the Seventh Circuit in Chicago, Illinois. The Senate received word from the president on September 29.