For the first case mentioned above, the form of executive-branch arrangement is distinct from most other governments and semi-presidential republics that separate the head of state (usually designated as the "president") from the head of government (usually designated as "prime minister", "premier" or "chancellor") and subject the latter to the confidence of parliament and a lenient tenure in office while the head of state lacks dependency and investing either office with the majority of executive power.[ clarification needed ]

In contrast to republics operating under either the presidential system or the semi-presidential system, the head of state usually does not have executive powers as an executive president would (some may have 'reserve powers' or a bit more influence beyond that), because many of those powers have been granted to a head of government (usually called a prime minister). [1] [2] [ clarification needed ]

However, in a parliamentary republic with a head of state whose tenure is dependent on parliament, the head of government and head of state can form one office (as in Botswana, the Marshall Islands, Nauru, and South Africa), but the president is still selected in much the same way as the prime minister is in most Westminster systems. This usually means that they are the leader of the largest party or coalition of parties in parliament.

In some cases, the president can legally have executive powers granted to them to undertake the day-to-day running of government (as in Austria and Iceland) but by convention they either do not use these powers or they use them only to give effect to the advice of the parliament or head of government. Some parliamentary republics could therefore be seen as following the semi-presidential system but operating under a parliamentary system.

Typically, parliamentary republics are states that were previously constitutional monarchies with a parliamentary system, with the position of head of state given to a monarch. [3]

Following the defeat of Napoleon III in the Franco-Prussian War, France once again became a republic – the French Third Republic – in 1870. The President of the Third Republic had significantly less executive powers than those of the previous two republics had. The Third Republic lasted until the invasion of France by Nazi Germany in 1940. Following the end of the war, the French Fourth Republic was constituted along similar lines in 1946. The Fourth Republic saw an era of great economic growth in France and the rebuilding of the nation's social institutions and industry after the war, and played an important part in the development of the process of European integration, which changed the continent permanently. Some attempts were made to strengthen the executive branch of government to prevent the unstable situation that had existed before the war, but the instability remained and the Fourth Republic saw frequent changes in government – there were 20 governments in ten years. Additionally, the government proved unable to make effective decisions regarding decolonization. As a result, the Fourth Republic collapsed and what some critics considered to be a de facto coup d'état, subsequently legitimized by a referendum on 5 October 1958, led to the establishment of the French Fifth Republic in 1959.

Chile became the first parliamentary republic in South America following a civil war in 1891. However, following a coup in 1925 this system was replaced by a Presidential one.[ original research? ]

Since the London Declaration of 29 April 1949 (just weeks after Ireland declared itself a republic, and excluded itself from the Commonwealth) republics have been admitted as members of the Commonwealth of Nations.

In the case of many republics in the Commonwealth of Nations, it was common for the Sovereign, formerly represented by a Governor-General, to be replaced by an elected non-executive head of state. This was the case in South Africa (which ceased to be a member of the Commonwealth immediately upon becoming a republic), Malta, Trinidad and Tobago, India and Vanuatu. In many of these examples, the last Governor-General became the first president. Such was the case with Sri Lanka and Pakistan. 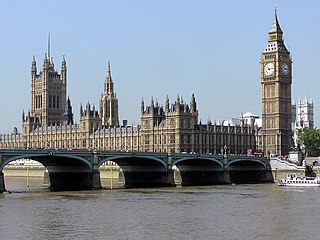 The Westminster system is a parliamentary system of government that was developed in England, which is now a constituent country within the United Kingdom. This term comes from the Palace of Westminster, the seat of the British Parliament. The system is a series of procedures for operating a legislature. It is used, or was once used, in the national and subnational legislatures of most former British Empire colonies upon gaining responsible government, beginning with the first of the Canadian provinces in 1848 and the six Australian colonies between 1855 and 1890. However, some former colonies have since adopted either the presidential system or a hybrid system as their form of government.

A semi-presidential system or dual executive system is a system of government in which a president exists alongside a prime minister and a cabinet, with the latter being responsible to the legislature of the state. It differs from a parliamentary republic in that it has a popularly elected head of state, who is more than a mostly ceremonial figurehead, and from the presidential system in that the cabinet, although named by the president, is responsible to the legislature, which may force the cabinet to resign through a motion of no confidence.

The president of Georgia is the constitutional head of state of Georgia as well as the supreme commander-in-chief of the Defense Forces. They represent Georgia in foreign relations. The constitution defines the presidential office as "the guarantor of the country’s unity and national independence."

In politics, a figurehead is a person who de jure appears to hold an important and often supremely powerful title or office, yet de facto exercises little to no actual power. This usually means that they are head of state, but not head of government. The metaphor derives from the carved figurehead at the prow of a sailing ship.

A unitary parliamentary republic refers to a unitary state with a republican form of government that is dependent upon the confidence of parliament.