United States attorneys are officials of the U.S. Department of Justice who serve as the chief federal law enforcement officers in each of the 94 U.S. federal judicial districts. Each U.S. attorney serves as the United States' chief federal criminal prosecutor in their judicial district and represents the U.S. federal government in civil litigation in federal and state court within their geographic jurisdiction. U.S. attorneys must be nominated by the President and confirmed by the Senate, after which they serve four-year terms.

Currently, there are 93 U.S. attorneys in 94 district offices located throughout the United States, Puerto Rico, the U.S. Virgin Islands, Guam, and the Northern Mariana Islands. One U.S. attorney is assigned to each of the judicial districts, with the exception of Guam and the Northern Mariana Islands, where a single U.S. attorney serves both districts. Each U.S. attorney is the chief federal law enforcement officer within a specified jurisdiction, acting under the guidance of the United States Attorneys' Manual . [1] They supervise district offices with as many as 350 assistant U.S. attorneys (AUSAs) and as many as 350 support personnel. [2]

U.S. Attorney's Offices are staffed mainly by assistant U.S. Attorneys (AUSA). Often colloquially called "federal prosecutors", assistant U.S. attorneys are government lawyers who act as prosecutors in federal criminal trials and as the United States federal government's lawyers in civil litigation in which the United States is a party. In carrying out their duties as prosecutors, AUSAs have the authority to investigate persons, issue subpoenas, file formal criminal charges, plea bargain with defendants, and grant immunity to witnesses and accused criminals. [3]

(1) the qualification of a United States attorney for such district appointed by the President under section 541 of this title; or
(2) the expiration of 120 days after appointment by the Attorney General under this section.

(d) If an appointment expires under subsection (c)(2), the district court for such district may appoint a United States attorney to serve until the vacancy is filled. The order of appointment by the court shall be filed with the clerk of the court.

On March 9, 2006, President George W. Bush signed into law the USA PATRIOT and Terrorism Prevention Reauthorization Act of 2005 [10] which amended Section 546 by striking subsections (c) and (d) and inserting the following new subsection:

(c) A person appointed as United States attorney under this section may serve until the qualification of a United States Attorney for such district appointed by the President under section 541 of this title.

This, in effect, extinguished the 120-day limit on interim U.S. attorneys, and their appointment had an indefinite term. If the president failed to put forward any nominee to the Senate, then the Senate confirmation process was avoided, as the Attorney General-appointed interim U.S. attorney could continue in office without limit or further action. Related to the dismissal of U.S. attorneys controversy, in March 2007 the Senate and the House voted to re-instated the 120-day term limit on interim attorneys. The bill was signed by President George W. Bush, and became law in June 2007. [11]

When first looking into this issue, I found that the statutes had given the courts the authority to appoint an interim U.S. attorney and that this dated back as far as the Civil War. Specifically, the authority was first vested with the circuit courts in March 1863.

Then, in 1898, a House of Representatives report explained that while Congress believed it was important to have the courts appoint an interim U.S. attorney:

"There was a problem relying on circuit courts since the circuit justice is not always to be found in the circuit and time is wasted in ascertaining his whereabouts."

Thus, for almost 100 years, the district courts were in charge of appointing interim U.S. attorneys, and they did so with virtually no problems. This structure was left undisturbed until 1986 when the statute was changed during the Reagan administration. In a bill that was introduced by Senator Strom Thurmond, the statute was changed to give the appointment authority to the Attorney General, but even then it was restricted and the Attorney General had a 120-day time limit. After that time, if a nominee was not confirmed, the district courts would appoint an interim U.S. attorney. The adoption of this language was part of a larger package that was billed as technical amendments to criminal law, and thus there was no recorded debate in either the House or the Senate and both Chambers passed the bill by voice vote.

Then, 20 years later, in March 2006 – again without much debate and again as a part of a larger package – a statutory change was inserted into the PATRIOT Act reauthorization. This time, the Executive's power was expanded even further, giving the Attorney General the authority to appoint an interim replacement indefinitely and without Senate confirmation.

As chief federal law enforcement officers, U.S. attorneys have authority over all federal law enforcement personnel within their districts and may direct them to engage, cease or assist in investigations.[ citation needed ] In practice, this has involved command of Federal Bureau of Investigation assets but also includes other agencies under the Department of Justice, such as the Bureau of Alcohol, Tobacco and Firearms and Drug Enforcement Administration.[ citation needed ] Additionally, U.S. attorneys cooperate with other non-DOJ law enforcement agencies – such as the United States Secret Service and Immigration and Customs Enforcement – to prosecute cases relevant to their jurisdictional areas.

These responsibilities include certain legal, budgetary, administrative, and personnel services, as well as legal education.

The EOUSA was created on April 6, 1953, by Attorney General Order No. 8-53 to provide for close liaison between the Department of Justice in Washington, DC, and the 93 U.S. attorneys located throughout the 50 states, the District of Columbia, Guam, the Northern Mariana Islands, Puerto Rico, and the U.S. Virgin Islands. It was organized by Ninth Circuit Court of Appeals judge James R. Browning, who also served as its first chief.

Note: Except as indicated parenthetically, the foregoing links are to the corresponding district court, rather than to the U.S. Attorney's Office. 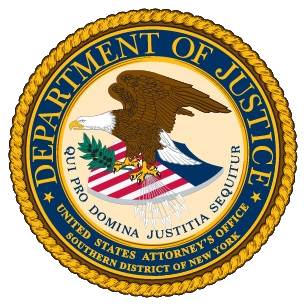 The United States Attorney for the Southern District of New York is the chief federal law enforcement officer in eight New York counties: New York (Manhattan), Bronx, Westchester, Putnam, Rockland, Orange, Dutchess and Sullivan. Established by the Judiciary Act of 1789, the office represents the United States government in criminal and civil cases across the country. The SDNY handles a broad array of cases, including but not limited to those involving white collar crime, domestic terrorism, cybercrime, public corruption, organized crime, as well as civil rights disputes. 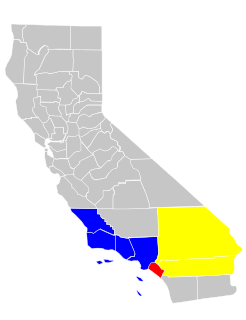 The United States District Court for the Middle District of Alabama is a federal court in the Eleventh Circuit.

The United States District Court for the Northern District of Alabama is a federal court in the Eleventh Circuit.

The United States District Court for the Eastern District of Oklahoma is a federal court in the Tenth Circuit.

The U.S. District Court for the Northern District of Ohio is the federal trial court for the northern half of Ohio–essentially everything north of the Columbus area. The court has courthouses in Cleveland, Toledo, Akron and Youngstown.

The United States Trustee Program is a component of the United States Department of Justice that is responsible for overseeing the administration of bankruptcy cases and private trustees. The applicable federal law is found at 28 U.S.C. § 586 and 11 U.S.C. § 101, et seq. 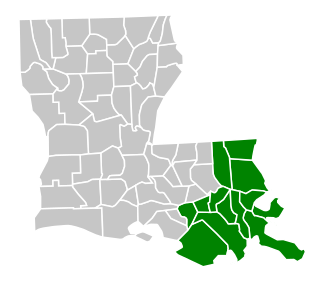 An assistant United States attorney (AUSA) is an official career civil service position in the U.S. Department of Justice composed of lawyers working under the U.S. Attorney of each U.S. federal judicial district. They represent the federal government of the United States in civil and appellate litigation and in federal criminal prosecutions. Assistant U.S. attorneys working in their office's criminal section are often called federal prosecutors. 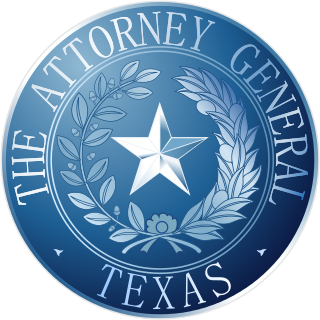 The Texas attorney general is the chief legal officer of the U.S. state of Texas. The current officeholder, Republican Ken Paxton, has served in the position since January 5, 2015.

The United States Department of Justice Tax Division is responsible for the prosecution of both civil and criminal cases arising under the Internal Revenue Code and other tax laws of the United States. The Division began operation in 1934, under United States Attorney General Homer Stille Cummings, who charged it with primary responsibility for supervising all federal litigation involving internal revenue. 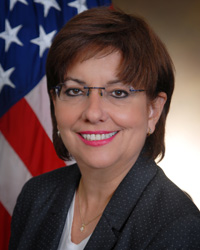 Rosa Emilia Rodríguez-Vélez is an American lawyer who was the acting United States Attorney for the District of Puerto Rico from 2007 to 2019. She is a career prosecutor, first in the Puerto Rico Department of Justice and subsequently in the U.S. Attorney's office in San Juan.

James Columcille Dever III is an American attorney and jurist serving as a United States district judge of the United States District Court for the Eastern District of North Carolina. 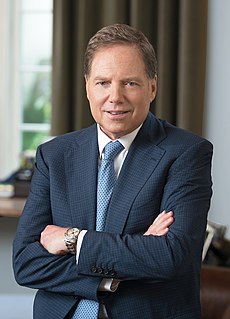 Geoffrey Steven Berman is an American attorney who served as the United States Attorney for the Southern District of New York from 2018 to 2020. 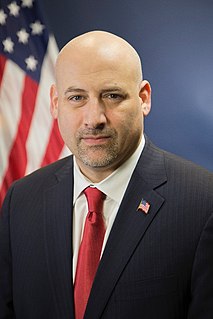 Craig Carpenito is an American lawyer who served as the United States Attorney for the District of New Jersey. On January 5, 2018, Carpenito was appointed U.S. Attorney pursuant to 28 U.S.C. § 546 by US Attorney General Jeff Sessions. On April 27, 2018, the judges of the United States District Court for the District of New Jersey unanimously appointed Carpenito U.S. Attorney pursuant to their statutory powers. He resigned on January 5, 2021. He previously served as a federal prosecutor in the office from 2003 to 2008.

Wikimedia Commons has media related to United States Attorneys .
This page is based on this Wikipedia article
Text is available under the CC BY-SA 4.0 license; additional terms may apply.
Images, videos and audio are available under their respective licenses.