The District has three staffed offices and holds court in six cities: Elizabeth City, Fayetteville, Greenville, New Bern, Raleigh, and Wilmington. Its main office is in Raleigh. It is broken down into four divisions. The eastern division is headquartered in Greenville and handles cases from Beaufort, Carteret, Craven, Edgecombe, Greene, Halifax, Hyde, Jones, Lenoir, Martin, Pamlico, and Pitt counties.

The southern division is based in Wilmington and serves the counties of: Bladen, Brunswick, Columbus, Duplin, New Hanover, Onslow, Pender, Robeson, and Sampson. Its cases are heard in Wilmington.

On June 4, 1872, North Carolina was re-divided into two Districts, Eastern and Western, by 17  Stat.   215. [2] The presiding judge of the District of North Carolina, George Washington Brooks, was then reassigned to preside over only the Eastern District. The Middle District was created from portions of the Eastern and Western Districts on March 2, 1927, by 44  Stat.   1339. [2]

On July 6, 2021, under 135  Stat.   299, Hoke, Moore, Scotland, and Richmond counties were transferred into the Eastern District from the Western District to end the previous situation where Fort Bragg was covered by two different districts. [3]

Chief judges have administrative responsibilities with respect to their district court. Unlike the Supreme Court, where one justice is specifically nominated to be chief, the office of chief judge rotates among the district court judges. To be chief, a judge must have been in active service on the court for at least one year, be under the age of 65, and have not previously served as chief judge. A vacancy is filled by the judge highest in seniority among the group of qualified judges. The chief judge serves for a term of seven years or until age 70, whichever occurs first. The age restrictions are waived if no members of the court would otherwise be qualified for the position.

U.S. Attorneys for the Eastern District

The United States District Court for the District of South Carolina is the federal district court whose jurisdiction is the state of South Carolina. Court is held in the cities of Aiken, Anderson, Beaufort, Charleston, Columbia, Florence, Greenville, and Spartanburg.

The United States District Court for the Western District of Pennsylvania is a federal trial court that sits in Pittsburgh, Erie, and Johnstown, Pennsylvania. It is composed of ten judges as authorized by federal law. Appeals from this court are heard by the United States Court of Appeals for the Third Circuit. 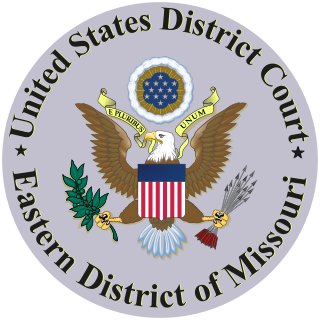 The United States District Court for the Eastern District of Missouri is a trial level federal district court based in St. Louis, Missouri, with jurisdiction over fifty counties in the eastern half of Missouri. The court is one of ninety-four district-level courts which make up the first tier of the U.S. federal judicial system. Judges of this court preside over civil and criminal trials on federal matters that originate within the borders of its jurisdiction. It is organized into three divisions, with court held in St. Louis, Hannibal, and Cape Girardeau.

The United States District Court for the Western District of Missouri is the federal judicial district encompassing 66 counties in the western half of the State of Missouri. The Court is based in the Charles Evans Whittaker Courthouse in Kansas City. 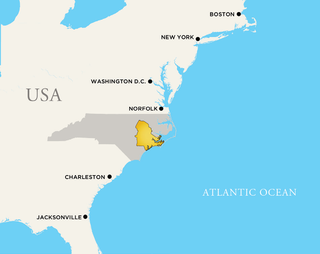 Eastern North Carolina is the region encompassing the eastern tier of North Carolina. It is known geographically as the state's Coastal Plain region. Primary subregions of Eastern North Carolina include the Sandhills, the Lower Cape Fear, the Crystal Coast, the Inner Banks and the Outer Banks. It is composed of the 41 most eastern counties in the state. Large cities include Greenville, Jacksonville, and Wilmington.

Courts of North Carolina include:

Barrett v. United States, 169 U.S. 218 (1898), was a case in which the Supreme Court of the United States held that South Carolina had never effectively been subdivided into separate judicial districts. Therefore, it was held, a criminal defendant allegedly tried in one district for a crime committed in the other had in fact been permissibly been tried in a separate division of a single district. 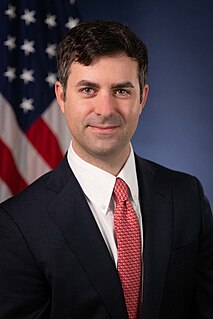