CHC legislative priorities cover all areas that have a direct impact on the Hispanic or Latino community. In order to best address these diverse issues, members work in smaller task forces that draw on their expertise and develop priority legislation within each area. Today, the CHC is organized as a Congressional Member organization, governed under the Rules of the U.S. House of Representatives.

The CHC is currently composed entirely of Democrats, although it had been a bipartisan organization since its founding. The Republican members left in the late 1990s over policy differences and, in 2003, formed their own group, the Congressional Hispanic Conference. In 2017, the Caucus declined to admit Rep. Carlos Curbelo, who would have been the only Republican member.

The Congressional Hispanic Caucus aims to address national and international issues and the impact these policies have on the Hispanic community. The function of the Caucus is to serve as a forum for the Hispanic and other Members of Congress to coalesce around a collective legislative agenda. In addition to covering legislative action, the CHC also monitors executive and judicial issues at the federal level.

The Congressional Hispanic Caucus (CHC) was organized in 1976 by five Hispanic Congressmen: Herman Badillo (NY), Baltasar Corrada del Río (PR), Kika de la Garza (TX), Henry B. Gonzalez (TX) and Edward Roybal (CA), to serve as a legislative organization through which legislative action, as well as executive and judicial actions, could be monitored to ensure the needs of Hispanics were being met. It was staffed by Raquel Marquez Frankel, who had grown up in Silver City and Albuquerque, New Mexico, and had become, in 1947, the first Latina to attend the University of New Mexico School of Law. [4] The goal was to work in conjunction with other groups, both inside and outside Congress, to strengthen Federal commitment to Hispanics and heighten the community's awareness of the operation and function of the American political system.

On January 31, 2007, a story on the Politico.com website reported that Rep. Joe Baca had called Rep. Loretta Sanchez a "whore" in a conversation with Speaker of the California Assembly Fabian Núñez, prompting Sanchez to resign from the CHC. Rep. Baca has denied this charge, [7] but two other CHC members, Linda Sánchez (Loretta's sister) and Hilda Solis, expressed support for Loretta Sanchez. [8] In the case of Solis, Baca called her "a kiss-up to Speaker Nancy Pelosi," for which he has apologized to Solis both privately and publicly. [9]

A year prior to the "whore" incident, The CHC's political action committee gave $3,000 to Baca's children's campaigns for state offices in California. Although Baca recused himself from the decision to make the contributions, six members of the caucus criticized the decision, saying that CHC's PAC should support only federal candidates. Consequently, on November 15, 2006, when Joe Baca was elected chair of the CHC, Solis and the Sanchez sisters challenged his election, saying that the voting should have been done by a secret ballot. [9]

On Monday, April 2, 2007, Congresswoman Linda Sánchez closed her offices in honor of César Estrada Chávez Day, a state holiday in California (which fell on a Saturday that year). CHC chair Baca made the following comment on Sánchez's decision to close the office: "I believe the best way to observe César Estrada Chávez Day is not by taking the day off from work or school." [10] On April 12, Linda Sánchez announced that she had suspended her membership in the Congressional Hispanic Caucus, citing "a need for structural reforms to ensure that the caucus is more equitable and inclusive of all its members." She specifically stated that her decision "was not based on personal animus directed at Baca." [11]

On June 30, 2013, Congressman Filemon Vela, Jr. resigned from the CHC, citing opposition to the Senate immigration bill which the CHC endorsed, saying: "Opponents of serious immigration reform are extracting a pound of flesh in this process by conditioning a pathway to citizenship on the construction of more ineffective border fence." [12] [13] The Congressional Hispanic Caucus has received support over the years from Mexican billionaire Ricardo Pliego and Azteca America. [14] Andres Ramirez, a Nevada political consultant, and Kevin de Leon, the President Pro Tempore of the California State Senate, have worked together to route money from Azteca America to various caucus groups and political campaigns, as Pliego is a known rival to Carlos Slim, whom both de Leon and Ramirez have attacked through the use of phony groups such as "Two Countries One Voice". Ramirez has appeared at functions for the Congressional Hispanic Caucus. [15] The effort to recruit past students and fellows involved in programs of the Congressional Hispanic Caucus has caused some political bloggers to speculate over the effort by California State Senator de Leon and his colleague California State Senator Jim Beall to use their legislative staffs, some of whom have been involved in programs of the Congressional Hispanic Caucus, to take over several local groups of California Democratic Party State Central Committee delegations for the purpose of establishing control for de Leon and his allies. [16]

In November 2017, the caucus refused to admit Republican congressman Carlos Curbelo, who would have been the only Republican in the caucus. [17] 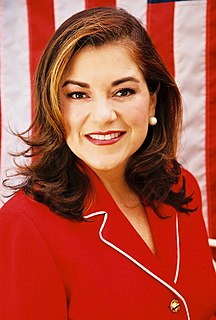 Loretta Lorna Sanchez is an American politician who served in the United States House of Representatives from 1997 to 2017. A Democrat, she was first elected in 1996, when she defeated long-serving Republican congressman Bob Dornan by fewer than 1,000 votes. Sanchez represented the 46th district from 1997 to 2003, then California's 47th congressional district from 2003 to 2013, and again in the 46th district from 2013 to 2017. The district lies in central Orange County. During her time in the House of Representatives, Sanchez was a member of the Democratic Party's moderate/conservative Blue Dog Coalition. 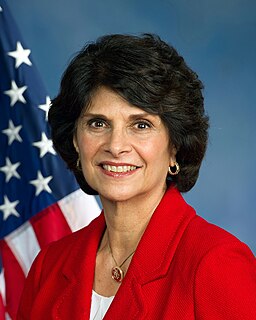 Lucille Elsa Roybal-Allard is an American politician serving as the U.S. Representative for California's 40th congressional district, serving in Congress since 1993. She is a member of the Democratic Party. The district, numbered as the 33rd from 1993 to 2003 and as the 34th from 2003 to 2013, includes much of southern Los Angeles, as well as a number of eastern suburbs such as Downey, Bell and Bell Gardens. 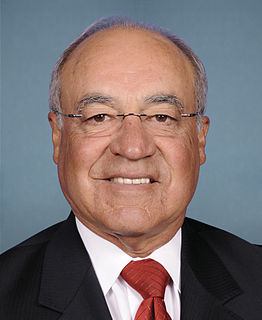 Joseph Natalio Baca Sr. is an American Democratic politician who served as U.S. Representative for southwestern San Bernardino County from 1999 to 2013. 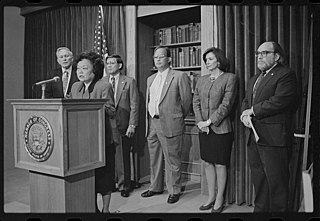 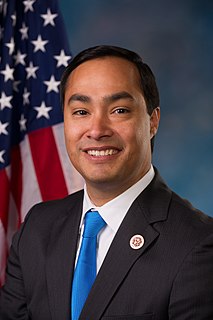 Joaquin Castro is an American Democratic politician who has served in the United States House of Representatives for Texas' 20th congressional district since 2013. The district includes just over half of his native San Antonio, Texas, as well as some of its nearby suburbs. From 2003 to 2013, Castro was a member of the Texas House of Representatives for the 125th district. While in the Texas state legislature, Castro served as vice-chair of the Higher Education Committee and was a member of the Judiciary & Civil Jurisprudence Committee. He also previously served on other committees, such as County Affairs, Border & International Affairs, and Juvenile Justice & Family Issues. 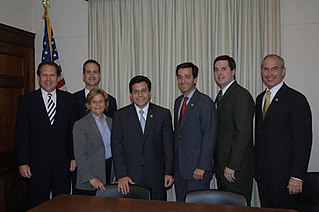 The Congressional Hispanic Conference (CHC) is a Republican sponsored caucus in the United States Congress. Currently with six members, the CHC was formed in 2003, with the stated goal of promoting policy outcomes of importance to Americans of Hispanic or Latino and Portuguese descent. These priorities included support of the following: then-President George W. Bush and American troops in the war against terrorism; the Free Trade Agreement of the Americas (FTAA); tax relief to families and the over two million Hispanic- and Portuguese-owned small businesses; support for faith based initiatives; and, educational choice for all. The impetus behind the Conference's creation was the debate surrounding the nomination of conservative lawyer Miguel Estrada to the DC Circuit Court of Appeals. The Congressional Hispanic Conference should not be confused with the older Congressional Hispanic Caucus, which is another congressional organization populated by Democratic members of Congress.

The Congressional Caucus to End Bullying was a congressional caucus of the United States Congress dedicated to advocacy of bills which target bullying in educational institutions and other establishments with anti-bullying legislation. It was headed by Rep. Mike Honda and was launched on June 28, 2012.It ended in January 2017 when Rep. Mike Honda lost his bid for reelection.

Filemón Bartolomé Vela Jr. is an American lawyer and politician who has served as the U.S. Representative for Texas's 34th congressional district since 2013. He is a member of the Democratic Party. He's nominated as Vice Chair of the DNC by President Biden.

Nanette Diaz Barragán is an American attorney and politician serving as the U.S. Representative for California's 44th congressional district since 2017. A member of the Democratic Party, she was a Hermosa Beach City councilmember from 2013 to 2015.

The U.S.-Japan Caucus is a bipartisan Congressional Member Organization within the United States Congress made up of over 100 members of the United States House of Representatives who work to strengthen and maintain U.S.–Japanese Relations. 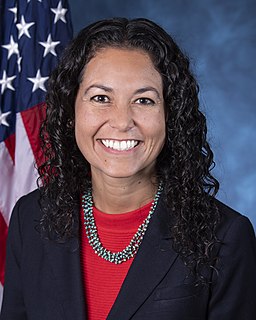 Xochitl Liana Torres Small is an American lawyer and politician who served as the U.S. Representative for New Mexico's 2nd congressional district from 2019 to 2021. The district is the largest by area in the nation that does not contain an entire state, covering New Mexico's southern half, including Roswell, Carlsbad, Las Cruces, and southern Albuquerque. She is a member of the Democratic Party. She was defeated in her 2020 reelection bid by Republican Yvette Herrell in a rematch of the 2018 congressional race. 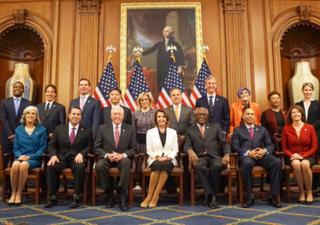