Some select committees are called special committees, such as the Senate Special Committee on Aging. However, they do not differ in any substantive way from the others. [2]

Prior to the advent of permanent standing committees in the early 19th century, the House of Representatives relied almost exclusively on select committees to carry out much of its legislative work. [3] The committee system has grown and evolved over the years. During the earliest Congresses, select committees, created to perform a specific function and terminated when the task was completed, performed the overwhelming majority of the committee work. The first committee to be established by Congress was on April 2, 1789, during the First Congress. It was a select committee assigned to prepare and report standing rules and orders for House proceedings and it lasted just five days, dissolving after submitting its report to the full House. Since that time, Congress has always relied on committees as a means to accomplish its work. [2]

Early select committees were fluid, serving their established function and then going out of existence. This makes tracking committees difficult, since many committees were known by the date they were created or by a petition or other document that had been referred to them. In a number of instances, the official journal and other congressional publications did not consistently refer to an individual committee by the same title. Though such inconsistencies still appeared during the 20th century, they were less frequent. [2]

While earlier select committees often narrowly tailored to specific issues, some select committees ultimately had a noticeable impact on federal legislation and American history. One was the select committee dealing with Missouri's admission to the Union as a new state. [3] The committee was established in 1821 and lasted just 7 days. [6] Chaired by Henry Clay, [3] the committee helped draft the Missouri Compromise, which attempted to resolve the question of whether slavery would be permitted in newly admitted states.

Some select committees went on to become permanent standing committees. The most notable of these is the Ways and Means Committee. It was first established as a select committee July 24, 1789 during a debate on the creation of the Treasury Department. Representatives had concerns over giving the new department too much authority over revenue proposals, so the House felt it would be better equipped if it established a committee to handle the matter. This first Committee on Ways and Means had 11 members and existed for just two months. It later became a standing committee in 1801, and still operates as a standing committee today. [7]

In the 20th century

Notable select and special committees established in the 20th century include:

In the 21st century

The Select Committee on Energy Independence and Global Warming was established in 2007 in the 110th Congress (under Speaker Nancy Pelosi) and renewed for the 111th Congress. The committee was advisory in nature, and lacked the legislative authority granted to standing committees. [13] [14] The committee was chaired by Representative Ed Markey of Massachusetts, the co-author of the unsuccessful 2009 cap-and-trade legislation (Waxman-Markey) supported by Democrats. [14]

The committee held 80 hearings and briefings on issues such as climate change and the Deepwater Horizon oil spill. [15] The committee played a role in the creation of the 2007 energy bill, the 2009 stimulus package (which contained funds for energy efficiency and other environmental provisions), and the 2009 Waxman-Markey bill (which was passed by the House, but never acted upon by the Senate). [15]

The committee was disbanded by the House in 2011, at the beginning of the 112th Congress, after Republicans took control of the House following the 2010 elections. [14] [15]

In May 2014, the House of Representatives voted to create the United States House Select Committee on Benghazi to investigate the 2012 attack on a U.S. compound in Benghazi, Libya. The committee spent more than $7.8 million on its investigation over two and a half years, issued its final report in December 2016, and shut down at the conclusion of the 114th Congress. [16] The committee was "one of the longest, costliest and most bitterly partisan congressional investigations in history", [17] lasting longer than the congressional inquiries into 9/11, Watergate, the assassination of President Kennedy, and the attack on Pearl Harbor. [18]

Democrats and critics viewed the inquiry as intended to damage the presidential prospects of former Secretary of State Hillary Clinton, [17] and House Majority Leader Kevin McCarthy prompted a controversy when he suggested that Republicans had succeeded with the Benghazi special committee in bringing down Clinton's poll numbers. [19] [20] James Fallows wrote that the committee was an "oppo-research arm of the Republican National Committee, far more interested in whatever it might dig up about or against ... Clinton than any remaining mysteries on the four Americans killed in Benghazi". [21] The committee's "most significant, if inadvertent, discovery" was Clinton's use of a private email server as secretary of state, which prompted an FBI investigation. [17]

The committee's final report found no evidence of culpability or wrongdoing by Clinton, but did criticize Defense Department, Central Intelligence Agency and State Department officials for security lapses. [17] In a dissenting report, Democrats accused the committee and its chairman, Trey Gowdy, "of flagrant political bias while arguing the investigation wasted taxpayer money to try to damage Clinton". [22]

There have been a number of unsuccessful proposals to create select committees. For example, in 2017, Representative Mike Thompson and 162 other Democratic members of Congress unsuccessfully introduced a measure to create a House Select Committee on Gun Violence Prevention to address gun violence in the United States. [23] [24] In the same year, Democratic Senator Chris Coons of Delaware and Republican Senator Cory Gardner introduced bipartisan legislation to create a Select Committee on Cybersecurity. [25]

The U.S. House Committee on Transportation and Infrastructure is a standing committee of the United States House of Representatives.

The Joint Committee on the Conduct of the War was a joint committee of the U.S. Congress during the American Civil War. Its role was to investigate the progress of the war against the Confederacy. The committee was established on December 9, 1861, and disbanded when the war ended in May, 1865. Members were drawn from both houses and both parties; it was chaired by Republican Senator Benjamin Wade (R-Ohio). Meetings were held in secret, but reports were issued from time to time. 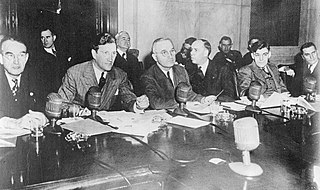 The Truman Committee, formally known as the Senate Special Committee to Investigate the National Defense Program, was a United States Congressional investigative body, headed by Senator Harry S. Truman. The bipartisan special committee was formed in March 1941 to find and correct problems in US war production with waste, inefficiency, and war profiteering. The Truman Committee proved to be one of the most successful investigative efforts ever mounted by the U.S. government: an initial budget of $15,000 was expanded over three years to $360,000 to save an estimated $10–15 billion in military spending and thousands of lives of U.S. servicemen. For comparison, the entire cost of the Manhattan Project was $2 billion, at the time. Chairing the committee helped Truman make a name for himself beyond his political machine origins and was a major factor in the decision to nominate him as vice president, which would propel him to the presidency after the death of Franklin D. Roosevelt.

The Committee on Alcoholic Liquor Traffic was a standing committee of the U.S. House of Representatives from 1893 to 1927. It was preceded by a select committee formed in 1879 during the 46th Congress.

The Senate Committee on Industrial Expositions was a committee of the United States Senate between 1899 and 1921. It was originally established as a select committee, but became a standing committee in 1909. It was preceded by three other select committees.

Harold Watson "Trey" Gowdy III is an American television news personality, former politician, and former federal prosecutor who served as the U.S. Representative for South Carolina's 4th congressional district from 2011 to 2019. His district included much of the Upstate region of South Carolina, including Greenville and Spartanburg.

The United States House Select Committee on Events Surrounding the 2012 Terrorist Attack in Benghazi was created after Speaker of the United States House of Representatives John Boehner, on May 2, 2014, proposed that a House select committee would be formed to further investigate the Benghazi attack on September 11, 2012. During that event, the U.S. diplomatic mission in Benghazi, Libya was attacked, resulting in the deaths of the U.S. ambassador to that country, J. Christopher Stevens, and three other Americans.

Ten investigations were conducted into the 2012 Benghazi attack, six of these by Republican-controlled House committees. Problems were identified with security measures at the Benghazi facilities, due to poor decisions made by employees of the State Department's Bureau of Diplomatic Security, and specifically its director Eric Boswell, who resigned under pressure in December 2012. Despite numerous allegations against Obama administration officials of scandal, cover-up and lying regarding the Benghazi attack and its aftermath, none of the ten investigations found any evidence to support those allegations. The last of the investigation committees issued its final report and shut down in December of 2016, one month after the 2016 presidential election. 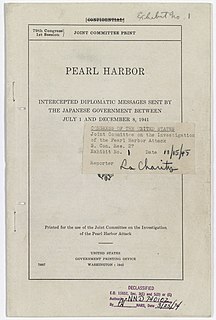 The Joint Committee on the Investigation of the Pearl Harbor Attack, also known as The Pearl Harbor Committee, was a committee of members of the United States Senate and the United States House of Representatives formed during the 79th United States Congress after World War II to investigate the causes of the 1941 attack on Pearl Harbor, and possible preventive measures against future attacks. The resolution for the formation of this committee passed in the Senate on September 6, 1945, and in the House on September 11, 1945. The final report of the committee issued on June 20, 1946.