The U.S. Senate Select Committee on Ethics is a select committee of the United States Senate charged with dealing with matters related to senatorial ethics. It is also commonly referred to as the Senate Ethics Committee. Senate rules require the Ethics Committee to be evenly divided between the Democrats and the Republicans, no matter who controls the Senate, although the chairman always comes from the majority party. The leading committee member of the minority party is referred to as Vice Chairman rather than the more common Ranking Member.

Pursuant to Senate Rule 25, the committee is limited to six members, and is equally divided between Democrats and Republicans. This effectively means that either party can veto any action taken by the committee. [1]

Members of the Senate Select Committee on Ethics, 115th Congress [2]

List of chairs of the Senate Select Committee on Ethics

The Committee on Armed Services is a committee of the United States Senate empowered with legislative oversight of the nation's military, including the Department of Defense, military research and development, nuclear energy, benefits for members of the military, the Selective Service System and other matters related to defense policy. The Armed Services Committee was created as a result of the Legislative Reorganization Act of 1946 following U.S. victory in the Second World War. It merged the responsibilities of the Committee on Naval Affairs and the Committee on Military Affairs.

The United States Senate Committee on Commerce, Science, and Transportation is a standing committee of the United States Senate. Besides having broad jurisdiction over all matters concerning interstate commerce, science and technology policy, and transportation, the Senate Commerce Committee is one of the largest of the Senate's standing committees, with 26 members in the 116th Congress. The Commerce Committee has six subcommittees. It is chaired by Sen. Roger Wicker (R-MS) with Sen. Maria Cantwell (D-WA) as Ranking Member. The majority office is housed in the Dirksen Senate Office Building, and the minority office is located in the Hart Senate Office Building.

The United States Senate Committee on the Judiciary, informally the Senate Judiciary Committee, is a standing committee of 22 U.S. senators whose role is to oversee the Department of Justice (DOJ), consider executive and judicial nominations, and review pending legislation. 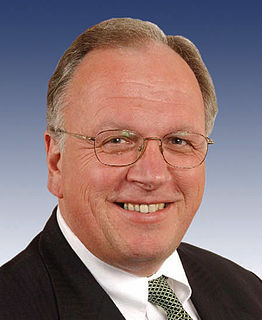 Thomas M. Reynolds is an American politician from the U.S. state of New York, formerly representing the state's 27th and 26th Congressional districts in the United States House of Representatives. Reynolds was chairman of the National Republican Congressional Committee, the official Republican House campaign organization, for the 2006 election cycle. He retired amid scandal at the end of the 110th Congress. Chris Lee was elected to succeed him.

John Roger Williams is an American businessman and politician who has been the U.S. Representative for Texas's 25th congressional district since 2013. A member of the Republican Party, he previously served under Governor Rick Perry as Secretary of State of Texas from November 2004 to July 1, 2007.