The committee was preceded by the Select Committee on Intelligence between 1975 and 1977. House Resolution 658 established the permanent select committee, which gave it status equal to a standing committee on July 14, 1977. [1]

The committee oversees all or part of the following executive branch departments and agencies:

Prior to establishing the permanent select committee in 1977, the House of Representatives established the "Select Committee on Intelligence", commonly referred to as the "Pike Committee", so named after its last chairman, Otis G. Pike of New York. The select committee had originally been established in February 1975 under the chairmanship of Congressman Lucien Nedzi of Michigan. Following Nedzi's resignation in June, the committee was reconstituted with Pike as chair, in July 1975, with its mandate expiring January 31, 1976. Under Pike's chairmanship, the committee investigated illegal activities by the U.S. Central Intelligence Agency (CIA) and the Federal Bureau of Investigation (FBI).

The final report of the Pike Committee was never officially published, due to Congressional opposition. However, unauthorized versions of the draft final report were leaked to the press. CBS News reporter Daniel Schorr was called to testify before Congress, but refused to divulge his source. [2] Major portions of the report were published by The Village Voice , and a full copy of the draft was published in England.

During the 1980s the HPSCI worked to acquire access to covert action notifications of the CIA, as well as to strengthen the role of the committee in intelligence agency funding. Under the Reagan administration, the HPSCI and United States Senate Select Committee on Intelligence (SSCI) worked with the Director of Central Intelligence William J. Casey on what was known as the "Casey Accords". The accords required that covert action findings were to be accompanied by "scope papers" that included a risk/gain assessment of each such activity. However, the deal was not acceptable to the HPSCI, and after the Iran-contra scandal, more pressure was placed on strengthening the oversight of committees. [3]

In 2017, the committee was tasked along with the SSCI to determine the degree of Russian interference in 2016 US elections. [4] The committee has also been investigating allegations of wiretapping of President Donald Trump, as well as ties between Russian officials and members of Donald Trump's presidential campaign. [5] [6] The committee came under intense scrutiny in 2017-2018 due to allegations of partisanship and leaks of classified information by members of the committee and their staff. In March 2018, the investigation into Russian interference in the 2016 elections was abruptly ended by the committee's Republican members despite the assertion by Democratic members that the investigation was incomplete and had failed to gather pertinent information. Notably, House Intelligence Republicans released a draft of their investigatory report which contradicted some findings of the U.S. Intelligence Community and was written without the input of House Democrats. [7] [8] In the wake of bitter disagreement about the committee's findings, Republican committee member Tom Rooney claimed that the committee had "lost all credibility" and had become "a political forum for people to leak information to drive the day's news." [9] In July 2018, the chair of the committee, Representative Devin Nunes, accused the Department of Justice, and its Federal Bureau of Investigations, of "stonewalling" the committee's investigation and taking partisan sides with regard to its Russia investigation. [10]

With change of Party leadership in the House for the 116th United States Congress, the Committee launched a probe of Trump's finances and Russian ties in February 2019. [11]

In June 2019, in the course of hearings on the national security implications of climate change, the White House blocked the submission of a statement by the State Department's Bureau of Intelligence and Research Office of the Geographer and Global Issues, and the analyst who wrote the statement, Rod Schoonover, resigned. [12] [13] 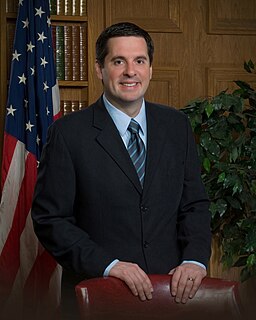 Devin Gerald Nunes is an American Republican politician and former dairy farmer serving as the U.S. Representative for California's 22nd congressional district since 2003. He was Chair of the House Intelligence Committee from 2015 to 2019 and a member of President Trump's transition team. Nunes's district, numbered as the 21st from 2003 to 2013 and as the 22nd after redistricting, is in the San Joaquin Valley and includes most of western Tulare County and much of eastern Fresno County. 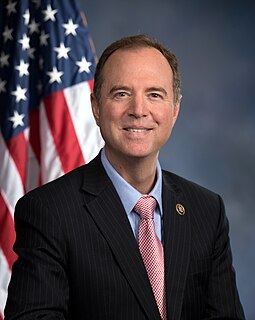 Adam Bennett Schiff is an American politician serving as the U.S. Representative for California's 28th congressional district since 2013. A member of the Democratic Party, Schiff is currently in his 10th term as a congressman, having served since 2001.

Kenneth Michael Conaway is the U.S. Representative for Texas's 11th congressional district, serving since 2005. He is a member of the Republican Party. The district is located in West Texas and includes Midland, Odessa, San Angelo, Brownwood, and Granbury. Conaway led the investigation into Russian interference in the 2016 United States elections after the Intelligence Committee chair, Devin Nunes, recused himself. Conaway indicated in July 2019 that he would not be seeking reelection. 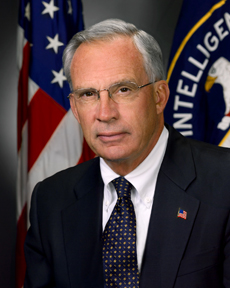 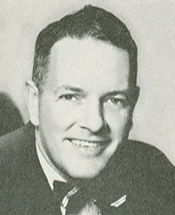 Otis Grey Pike was a Democratic member of the United States House of Representatives from New York.

The Pike Committee is the common name for the United States House Permanent Select Committee on Intelligence during the period when it was chaired by Democratic Representative Otis G. Pike of New York. The Select Committee had originally been established in February 1975 under the chairmanship of Congressman Lucien Nedzi of Michigan. Following Nedzi's resignation in June, the committee was reconstituted with Pike as chair, in July 1975, with its mandate expiring January 31, 1976. Under Pike's chairmanship, the committee investigated illegal activities by the U.S. Central Intelligence Agency (CIA), the Federal Bureau of Investigation (FBI), and the National Security Agency (NSA).

Spygate is a conspiracy theory initiated by President Donald Trump in May 2018 that the Obama administration had placed a spy in his 2016 presidential campaign for political purposes. 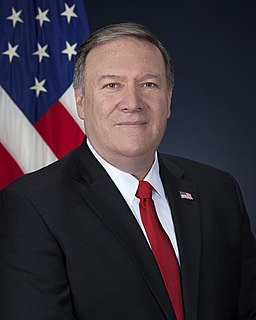 Michael Richard Pompeo is an American politician and attorney who, since April 2018, has served as the 70th United States secretary of state. He is a former United States Army officer and was director of the Central Intelligence Agency from January 2017 until April 2018. 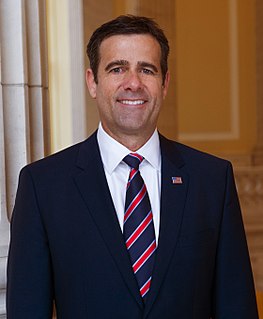 John Lee Ratcliffe is an American politician and attorney who has served as the congressman for Texas's 4th district since 2015. 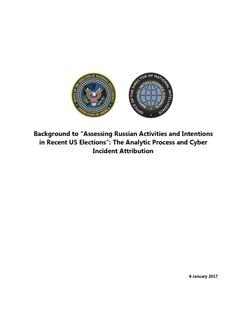 The Russian government interfered in the 2016 U.S. presidential election with the goal of harming the campaign of Hillary Clinton, boosting the candidacy of Donald Trump, and increasing political and social discord in the United States.

On March 4, 2017, U.S. President Donald Trump wrote a series of posts on his Twitter account that accused former President Barack Obama of wiretapping his phones at his Trump Tower office late in the 2016 presidential campaign. Trump called for a congressional investigation into the matter, and the Trump administration cited news reports to defend these accusations. His initial claims were based on an article in Breitbart News, a website known to publish conspiracy theories. 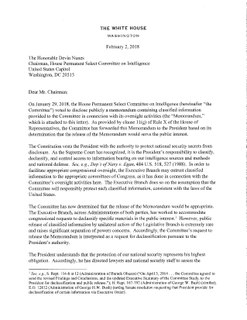 The Nunes memo is a four-page memorandum written for U.S. Representative Devin Nunes by his staff and released to the public by the Republican-controlled committee on February 2, 2018. The memo alleges that the Federal Bureau of Investigation (FBI) "may have relied on politically motivated or questionable sources" to obtain a Foreign Intelligence Surveillance Act (FISA) warrant in October 2016 and in three subsequent renewals on Trump adviser Carter Page in the early phases of the FBI's investigation into Russian interference in the 2016 United States elections.

This is a timeline of major events in the first half of 2017 related to the investigations into links between associates of Donald Trump and Russian officials that are suspected of being inappropriate, relating to Russian interference in the 2016 United States elections. Following the timeline of Russian interference in the 2016 United States elections before and after July 2016 up until election day November 8 and the post-election transition, this article begins with Donald Trump and Mike Pence being sworn into office on January 20, 2017, and is followed by the second half of 2017. The investigations continued in the first and second halves of 2018, 2019, and 2020.

Crossfire Hurricane was the code name for the counterintelligence investigation undertaken by the Federal Bureau of Investigation (FBI) in 2016 and 2017 into links between Trump associates and Russian officials and "whether individuals associated with the Donald J. Trump for President Campaign were coordinating, wittingly or unwittingly, with the Russian government's efforts to interfere in the 2016 U.S. presidential election." 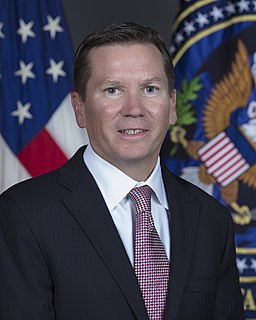 Michael K. Atkinson is an American attorney. He worked for the United States Department of Justice for about 15 years before becoming the second Inspector General of the Intelligence Community. He assumed office on May 17, 2018.