STEM in 30 is a non-commercial online science educational program for middle school students produced by the Smithsonian's National Air and Space Museum in Washington, D.C. The show is hosted by science-educators Marty Kelsey and Beth Wilson. [1] The program is released on a monthly basis throughout the school year free through the museum's website, YouTube and social media as well as broadcast on NASA-TV. [2] Each episode is typically a half hour and features special guests and different science, math, engineering or technology topics. [3]

Since first broadcasting in 2014, the program has covered dozens of topics including the NASA's Apollo program, Tuskegee Airmen, astronaut training, the Wright brothers and the Orion program. [4] While the program is often based in the one of the two locations of the National Air and Space Museum, the show has also been filmed on location in New York City, Seattle, Boston, Detroit, Houston, in Hurricane Florence and on the aircraft carrier USS Dwight D. Eisenhower.

The first four seasons of the show were broadcast live with a student audience. With its fifth season, STEM in 30 has switched its format to a pre-taped show along with a "Mission Debrief" a week later featuring a topic expert. The "Mission Debrief" is a live question and answer session about that month's topic.

In 2019, the first episode of season five, "Robotics: FIRST There Were People, Then There Were Machines," was nominated for a National Capital / Chesapeake Bay Emmy Award for Technology Program. The program has since received five regional Emmy nominations in total. [5]

The Teacher in Space Project (TISP) was a NASA program announced by Ronald Reagan in 1984 designed to inspire students, honor teachers, and spur interest in mathematics, science, and space exploration. The project would carry teachers into space as Payload Specialists, who would return to their classrooms to share the experience with their students.

Michael James Massimino is an American professor of mechanical engineering at Columbia University and a former NASA astronaut. He is the senior advisor of space programs at the Intrepid Sea, Air & Space Museum.

Scott Edward Parazynski is an American physician and a former NASA astronaut. A veteran of five Space Shuttle flights and seven spacewalks, Parazynski's latest mission was STS-120 in October, 2007 – highlighted by a dramatic, unplanned EVA to repair a live solar array. In May 2016 he was inducted into the United States Astronaut Hall of Fame. He retired from NASA in March 2009 to pursue entrepreneurial opportunities in the private sector, and he is currently the CEO of a technology start-up. He is the first person to have both flown in space and summited Mount Everest, the highest point on Earth.

Stephanie Diana Wilson is an American engineer and a NASA astronaut. She flew to space onboard three Space Shuttle missions, and is the second African American woman to go into space, after Mae Jemison. As of 2021, her 42 days in space are the most of any female African American astronaut.

Spaceflight participant is the term used by the NASA, Roscosmos, and the Federal Aviation Administration (FAA) for people who travel into space, but who are not professional astronauts.

Windows on Earth is a museum exhibit, website, and exploration tool, developed by TERC, Inc., and the Association of Space Explorers, that enables the public to explore an interactive, virtual view of Earth from space. In addition, the tool has been selected by NASA to help astronauts identify targets for photography from the International Space Station (ISS).

Jeanette Jo Epps is an American aerospace engineer and NASA astronaut. Epps received both her M. S. and Ph.D degrees in aerospace engineering from the University of Maryland, where she was part of the rotor-craft research group and was a NASA GSRP Fellow. She was chosen for the 20th class of NASA astronauts in 2009, graduating in 2011. Epps currently serves as a member of the ISS Operations Branch and has completed analog astronaut missions, including NEEMO 18 and CAVES 19. She is the second woman and first African-American woman to have participated in CAVES. 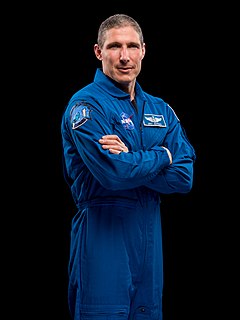 Michael Scott Hopkins is a United States Space Force colonel and NASA astronaut. Hopkins was selected in June 2009 as a member of the NASA Astronaut Group 20. He made his first spaceflight as a Flight Engineer on Soyuz TMA-10M/Expedition 37/Expedition 38, from September 2013 until March 2014. He is the first member of his astronaut class to fly in space. Hopkins is the first astronaut to transfer to the U.S. Space Force, participating in a transfer ceremony on the International Space Station. 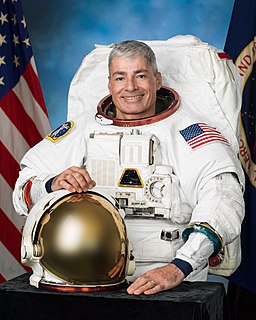 Mark Thomas Vande Hei is a retired United States Army officer and current NASA astronaut who has served as a flight Engineer for Expedition 53, 54, 64, and 65 on the International Space Station. He is married to Julie Vande Hei.

NASA has hosted many events for its social media enthusiasts called NASA Socials beginning in 2009. These events are targeted at the social media followers of NASA through platforms such as Twitter, Facebook, Google Plus, Instagram, YouTube and more. They provide guests with VIP access to NASA facilities and speakers with the goal of leveraging participants' social networks to further the outreach requirements of NASA as laid out in the National Aeronautics and Space Act. NASA re-branded these events as "Socials" in March 2012 as it expanded participation to services beyond just Twitter.

Jessica Ulrika Meir is an American NASA astronaut, marine biologist, and physiologist. She was previously Assistant Professor of Anesthesia at Harvard Medical School, Massachusetts General Hospital, Boston, following postdoctoral research in comparative physiology at the University of British Columbia. She has studied the diving physiology and behavior of emperor penguins in Antarctica, and the physiology of bar-headed geese, which are able to migrate over the Himalayas. In September 2002, Meir served as an aquanaut on the NASA Extreme Environment Mission Operations 4 crew. In 2013 she was selected by NASA to Astronaut Group 21. In 2016 Meir participated in ESA CAVES, a training course in which international astronauts train in a space-analogue cave environment. Meir launched on September 25, 2019, to the ISS onboard Soyuz MS-15, where she served as a flight Engineer during Expedition 61 and 62. On October 18, 2019, Meir and Christina Koch were the first women to participate in an all-female spacewalk.

Dr. Yajaira Sierra-Sastre is a Puerto Rican materials scientist, educator, and aspiring astronaut. She was part of a six-person crew, and the only Hispanic, selected to participate in a four-month-long, Mars analog mission funded by NASA. Sierra-Sastre aspires to become the first Puerto Rican woman to travel to outer space.

Irvine CubeSat STEM Program (ICSP) is a joint educational endeavor to teach, train and inspire the next generation of STEM professionals. ICSP involves students from six high schools from Irvine, California, and its main objective is to assemble, test, and launch a CubeSat into low Earth orbit.

Alyssa Carson is an American space enthusiast and undergraduate student. She is known for attending numerous space camps and visiting NASA visitor centers across nine states with her father, Bert Carson.