Paul Horowitz (born 1942) is an American physicist and electrical engineer, known primarily for his work in electronics design, as well as for his role in the search for extraterrestrial intelligence (see SETI).

At age 8, Horowitz achieved distinction as the world's youngest amateur radio operator. He went on to study physics at Harvard University (B.A., 1965; M.A., 1967; Ph.D., 1970), where he has also spent all of his subsequent career. His early work was on scanning microscopy (using both protons and X-rays). Horowitz has also conducted astrophysical research on pulsars and investigations in biophysics. His interest in practical electronics has led to a handful of inventions, including an automated voting machine and an acoustic mechanism for landmine detection, and an electronic Morse Code/Baudot code keyboard using a diode matrix and 66 TTL integrated circuits for Amateur Radio use. Since 1974 he has taught a practical course in electronics whose lecture notes became one of the best known textbooks in the field: The Art of Electronics (coauthored with Winfield Hill).

Horowitz was one of the pioneers of the search of intelligent life beyond the Earth, and one of the leaders behind SETI. This work has attracted both admiration and criticism. Harvard biologist Ernst Mayr has sharply criticized Horowitz for wasting the resources of the university and the efforts of graduate students on such an endeavour. Carl Sagan provided a strong rebuttal to Mayr's criticism, [1] and pointed out that many eminent biologists and biochemists had endorsed SETI with the statement:

We are unanimous in our conviction that the only significant test of the existence of extraterrestrial intelligence is an experimental one. No a priori arguments on this subject can be compelling or should be used as a substitute for an observational program. We urge the organization of a coordinated, worldwide, and systematic search for extraterrestrial intelligence.

Sagan was believed to have based the main character in his novel Contact partly on Horowitz. [3]

Horowitz led the META and BETA SETI projects. Horowitz and Sagan reported that, in the course of project META, they had detected 37 signals "which survived all our cuts" and cannot be positively identified. [4] On September 10, 1988 the university's 84-foot radio dish detected "an enormous spike which was 750 times noise. If you converted the radio signal into audio it would sound just like a tone. It would sound like a flute." All 37 signals, however, have been single events which have never been heard again. The software company 37signals has been named after these signals. [5]

Horowitz holds professorial appointments at Harvard in both physics and electrical engineering. He has also served as a member of the JASON Defense Advisory Group. One of his doctoral students, John A. Howell, is now Emeritus Professor of Physics at Earlham College.

Carl Edward Sagan was an American astronomer, cosmologist, astrophysicist, astrobiologist, author, science popularizer, and science communicator in astronomy and other natural sciences. He is best known as a science popularizer and communicator. His best known scientific contribution is research on extraterrestrial life, including experimental demonstration of the production of amino acids from basic chemicals by radiation. Sagan assembled the first physical messages sent into space: the Pioneer plaque and the Voyager Golden Record, universal messages that could potentially be understood by any extraterrestrial intelligence that might find them. Sagan argued the now accepted hypothesis that the high surface temperatures of Venus can be attributed to and calculated using the greenhouse effect.

Ernst Walter Mayr was one of the 20th century's leading evolutionary biologists. He was also a renowned taxonomist, tropical explorer, ornithologist, philosopher of biology, and historian of science. His work contributed to the conceptual revolution that led to the modern evolutionary synthesis of Mendelian genetics, systematics, and Darwinian evolution, and to the development of the biological species concept.

The Fermi paradox, named after Italian-American physicist Enrico Fermi, is the apparent contradiction between the lack of evidence for extraterrestrial civilizations elsewhere in the Milky Way galaxy and various high estimates for their probability.

The search for extraterrestrial intelligence (SETI) is a collective term for scientific searches for intelligent extraterrestrial life, for example, monitoring electromagnetic radiation for signs of transmissions from civilizations on other planets.

Frank Donald Drake is an American astronomer and astrophysicist. He is involved in the search for extraterrestrial intelligence, including the founding of SETI, mounting the first observational attempts at detecting extraterrestrial communications in 1960 in Project Ozma, developing the Drake equation, and as the creator of the Arecibo Message, a digital encoding of an astronomical and biological description of the Earth and its lifeforms for transmission into the cosmos.

The Planetary Society is an American internationally active, non-governmental, nonprofit foundation. It is involved in research, public outreach, and political advocacy for engineering projects related to astronomy, planetary science, and space exploration. It was founded in 1980 by Carl Sagan, Bruce Murray, and Louis Friedman, and has about 60,000 members from more than 100 countries around the world.

Contact is a 1985 science fiction novel by American scientist Carl Sagan. It deals with the theme of contact between humanity and a more technologically advanced, extraterrestrial life form. It ranked No. 7 on the 1985 U.S. bestseller list. The novel originated as a screenplay by Sagan and Ann Druyan in 1979; when development of the film stalled, Sagan decided to convert the stalled film into a novel. The film concept was subsequently revived and eventually released in 1997 as the film Contact starring Jodie Foster.

Extraterrestrial intelligence refers to hypothetical intelligent extraterrestrial life. The question of whether other inhabited worlds might exist has been debated since ancient times. The modern form of the concept emerged when the Copernican Revolution demonstrated that the Earth was a planet revolving around the Sun, and other planets were conversely, other worlds. The question of whether other inhabited planets or moons exist was a natural consequence of this new understanding. It has become one of the most speculative questions in science and is a central theme of science fiction and popular culture.

Jill Cornell Tarter is an American astronomer best known for her work on the search for extraterrestrial intelligence (SETI). Tarter is the former director of the Center for SETI Research, holding the Bernard M. Oliver Chair for SETI at the SETI Institute. In 2002, Discover magazine recognized her as one of the 50 most important women in science. 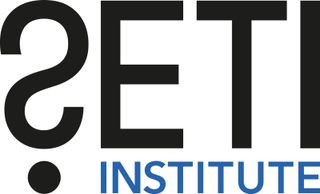 The SETI Institute is a not-for-profit research organization whose mission is to explore, understand, and explain the origin and nature of life in the universe, and to apply the knowledge gained to inspire and guide present and future generations. It aims for discovery and for sharing knowledge as scientific ambassadors to the public, the press, and the government. SETI stands for the "search for extraterrestrial intelligence". The Institute consists of three primary centers: The Carl Sagan Center, devoted to the study of life in the universe, the Center for Education, focused on astronomy, astrobiology and space science for students and educators, and the Center for Public Outreach, producing "Big Picture Science," the Institute's general science radio show and podcast, and "SETI Talks" weekly colloquium series.

The Wow! signal was a strong narrowband radio signal received on August 15, 1977, by Ohio State University's Big Ear radio telescope in the United States, then used to support the search for extraterrestrial intelligence. The signal appeared to come from the direction of the constellation Sagittarius and bore the expected hallmarks of extraterrestrial origin. 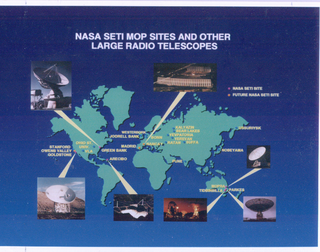 Communication with extraterrestrial intelligence or CETI is a branch of the search for extraterrestrial intelligence that focuses on composing and deciphering interstellar messages that theoretically, could be understood by another technological civilization. This field of study once was known as exosemiotics. The best-known CETI experiment of its kind was the 1974 Arecibo message composed by Frank Drake.

The Allen Telescope Array (ATA), formerly known as the One Hectare Telescope (1hT), is a radio telescope array dedicated to astronomical observations and a simultaneous search for extraterrestrial intelligence (SETI). The array is situated at the Hat Creek Radio Observatory in Shasta County, 290 miles (470 km) northeast of San Francisco, California.

Astropulse is a distributed computing project that uses volunteers around the globe to lend their unused computing power to search for primordial black holes, pulsars, and extraterrestrial intelligence (ETI). Volunteer resources are harnessed through Berkeley Open Infrastructure for Network Computing (BOINC) platform. In 1999, the Space Sciences Laboratory launched SETI@home, which would rely on massively parallel computation on desktop computers scattered around the world. SETI@home utilizes recorded data from the Arecibo radio telescope and searches for narrow-bandwidth radio signals from space, signifying the presence of extraterrestrial technology. It was soon recognized that this same data might be scoured for other signals of value to the astronomy and physics community.

Robert H. Gray is an American data analyst, author, and astronomer, and author of The Elusive Wow: Searching for Extraterrestrial Intelligence.

For other uses, see Message from Space (disambiguation).

The Berkeley SETI Research Center (BSRC) conducts experiments searching for optical and electromagnetic transmissions from intelligent extraterrestrial civilizations. The center is based at the University of California, Berkeley.