Perhaps Love is a 1987 Australian television film about a love affair between a Frenchman and an Australian.

Student radicals, Patric and Annie, have an affair in Bali in the 1960s. They promise to meet up in Kathmandu but she returns to Melbourne, marries a left-wing politician, Jack, and has children. Patric and Annie meet up 18 years later. He is now more politically conservative, but they rekindle their affair. She decides to leave her husband and family, but changes her mind.

It was the first of a proposed nine TV movies that were made as a part of a co-production deal between Revcom and ABC. [2] Three were to be made in Australia, three in Europe with Australians; the common theme was to be "sentiment". (The other Australian movies were The Lizard King and Going Price aka A Matter of Convenience .) Filming was complete by June 1986 and involved shooting in the Philippines. [3]

In August 1986 the Sydney Morning Herald reported that "the ABC have kept quiet about" the movie, "and understandably so." [4]

The film did not screen until March 1988. The Sydney Morning Herald TV critic said the film had "endless boring flashbacks" and "the inedible print of its writer, Bob Ellis, who has made a career out of sardonically attacking the middle classes, ate into the script to an unimaginative degree." She also claimed "the ending was rather too twee." [5]

Claudia Karvan is an Australian actress, producer and scriptwriter. As a child actor, she first appeared in the film, Molly (1983) and followed with an adolescent role in High Tide (1987). She portrayed a teacher in The Heartbreak Kid (1993) – the film was spun off into a TV series, Heartbreak High (1994–1999), with her character taken over by Sarah Lambert. Karvan's roles in television series include The Secret Life of Us (2001–2005), Love My Way (2004–2007), Newton's Law (2017) and Halifax: Retribution (2020). She won Best Actress in a Leading Role in a Television Drama at the AFI Awards for her appearance in G.P. (1996). She won two similar AFI Awards for her role in Love My Way and in 2014 for her work in The Time of Our Lives (2013–2014). As a co-producer and co-writer on Love My Way, she won three further AFI Awards for Best Drama Series in 2005, 2006 and 2007. Karvan was inducted into the Australian Film Walk of Fame in 2007 in acknowledgment of her contributions to the Australian film and television industry. From 2010 to 2011, she starred in the drama series Spirited, which she co-created and was executive producer. She appeared as Judy Vickers in Puberty Blues. Karvan has co-produced House of Hancock and Doctor Doctor (2016–current).

Embassy is an Australian television serial originally broadcast by ABC Television from 1990 to 1992. Three series were produced with a total of 39 episodes. The program is set in the Australian embassy of a fictional South-East Asian country called Ragaan, located half-way up the Malay Peninsula, somewhere between Thailand and Malaysia. It features stories about Australian ambassadors and their staff. 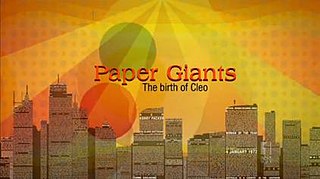 Paper Giants: The Birth of Cleo is a 2011 Australian two part television miniseries about the beginning of Cleo magazine and its creator, Ita Buttrose. The series stars Asher Keddie as Buttrose and Rob Carlton as Kerry Packer.

Is There Anybody There? is a 1976 Australian TV movie directed by Peter Maxwell and produced by Robert Bruning. It has been called the first colour tele movie made in Australia and its success led to Bruning being commissioned to make a series of TV movies, including The Newman Shame which also starred Lazenby. 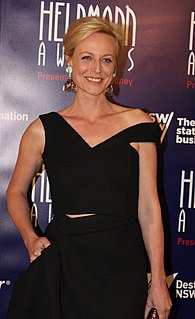 Marta Dusseldorp is an Australian stage, film and theatre actress. Her television credits include BlackJack, Crownies, Jack Irish and A Place to Call Home.

Because He's My Friend is a 1978 Australian TV movie about a married couple and their mentally disabled son. It was one of six telemovies made in Australia as co productions between the ABC and Transatlantic Enterprises.

The Lizard King is a 1988 Australian television film about a woman who comes from France to Australia in search of her son.

A Matter of Convenience is a 1987 Australian television film about a couple living in Melbourne. Velma works in a butchers and wants a baby, but has no money. Her work shy partner Joe is resistant to any kind of job. After meeting Alphonse Torontoa, a Frenchman who arranges weddings for immigrants looking to stay in Australia, Velma becomes a witness to these marriages of convenience. After Joe's rejection of a job in the local chicken factory, she forces him to marry an immigrant bride for money.

No Room to Run is a 1977 Australian television film about an American businessman who kills a man in Sydney. The lead actors, writer, producer and director were all American. It stars real-life husband and wife Richard Benjamin and Paula Prentiss.

Fair Passenger is a 1957 Australian television film which aired on ABC. It was the first one-hour television drama produced in Melbourne, and aired there live on 17 July 1957.

The Sergeant from Burralee is an Australian television play written by Phillip Grenville Mann. The play was also broadcast by the BBC and screened for West German television.

Outpost is a 1959 Australian television play about Australian soldiers in New Guinea during World War Two. It was based on a script by John Cameron.

Antony and Cleopatra is a 1959 Australian television play based on the play by William Shakespeare. Australian TV drama was relatively rare at the time.