Platinum Stars was a South African football club based in Phokeng near Rustenburg, North West Province that played in the Premier Soccer League. The club was nicknamed Dikwena, the Tswana name for Crocodiles.

The team's best finish in the Premiership came during the Return of well known Daniel "Sailor" Tshabalala 2006–07 season, when the club finished as league runners-up, earning them their only appearance in the CAF Champions League. During the same season, the club also collected their first major trophy, when the club won the Telkom Knockout in December 2006.

The club was the historical descendant of Khakhu Fast XI, that initially were founded as an amateur club in 1937, and represented the local city Khakhu – located 170 km northeast of Polokwane. [1] Ahead of the 1998–99 season, the club owner Joseph Mapfulagasha, relocated the team approximately 30 km south to the city Mapate, and at the same time changed the name of the club to Mapate Silver Stars. Along with the new official name, a trend also developed to nickname the team as Tycoon Silver Stars, as the new owner Joseph Mapfulagasha was commonly known by the nickname "Tycoon". [2] In the first season of Mapate Silver Stars, the club straight away won promotion from Vodacom League, to play the subsequent season in the second tier of professional football in South Africa, known as the National First Division. [3]

Starting from the 2000–01 season and a few years ahead, the club became shortly affiliated with the reborn phoenix club Highlands Park, which were founded on the remains of the well-known and successful original Highlands Park, that played at the top flight level of South African football from November 1959 to February 1983, at Balfour Park Stadium in the northern Johannesburg suburb Highlands North. The historical fan base of Highlands Park, were located in the surrounding affluent (and highly Jewish) northern Johannesburg neighbourhoods, such as Houghton, Saxonwold, Sydenham, Glenhazel, Highlands North, Rosebank, Killarney, Linksfield and Cyrildene. In 1996 the longtime fan and businessman Larry Brookstone, purchased Highlands Park out of a previous bankruptcy, and re-established them as an amateur club. When he in 2000 also opted to purchase 50% of the shares in Mapate Silver Stars, [4] and became the managing director of the club, he decided to start a collaboration between both of his two clubs, where the Highlands Park juniors -located at Highlands North, initially became the nursery team of Silver Stars, that played all their professional home matches 309 km northeast of Highlands North, at the big Peter Mokaba Stadium in Polokwane. [5] In order to reflect this unique collaboration, the name of the professional club also changed ahead of the 2000–01 season, to HP Silver Stars. [3]

After playing four seasons in the National First Division, the club finally won promotion to play the 2003–04 season in the top flight Premier Soccer League (PSL). The clubs first PSL season ended with a respectable 11th place, and they further improved in the following two seasons, with a 7th place and 5th place. Ahead of the next 2006–07 season, the Royal Bafokeng Nation signed a sponsorship deal with Silver Stars, where the club in return, agreed to move its home venue from Polokwane to the Royal Bafokeng Sports Palace near Rustenburg in the North West Province. Silver Stars immediately repaid their new sponsors, by achieving their first set of top flight medals in the club's history, when they beat Ajax Cape Town 3–1 in the final of the inaugural Telkom Knockout league cup, in December 2006. By the end of the 2006–07 season, the club also won silver medals in the Premier Soccer League. After this great season of the club, the investment vehicle of the Royal Bafokeng Nation (RBN), Royal Bafokeng Holding, decided to buy 51% of the shares in May 2007, and along the way also opted to change the name of the club to Platinum Stars. [3]

The reason behind the introduction of a new name for the club, was in order to better reflect the historic association of both the North West province and the RBN, with platinum mining in South Africa being their major business activity. [2] With the arrival of RBN as the new owners, the longtime managing director Larry Brookstone and the successful team coach Owen Da Gama, at the same time opted to stop working for the club in May 2007. Larry Brookstone moved on to work as the CEO of the reborn Highlands Park, and Owen Da Gama continued for the next three seasons as a team coach for other top flight clubs in the Premier Soccer League. [3]

In 2008, Platinum Stars became the first South African side to beat the Egyptian club Al Ahly, when they won a first leg clash 2–1, at the third round of the African Champions League. The result however only provided some short-lived success, as Platinum Stars lost the second leg 0–2, and was kicked out of the tournament by Al Ahly, due to a better aggregate score. Meanwhile, the results of the club had also started to falter in PSL, where the club only achieved a 10th place in the 2007–08 season. And the next two seasons brought no further improvement, with only a 13th place in 2008–09 and a 14th place in 2009–10. Despite having experienced this hard time with several years of faltering results, the financial support by the Royal Bafokeng Nation was fully maintained, with RBN even opting in November 2008, to buy the remaining 49% of the club shares held by Brookstone and Mapfulagasha. [3] During the 2009–10 season, the club also moved their daily training ground and administrative headquarters with backroom staff, from the previous location at the Modderfontein Sports Club in Johannesburg, to the new Bafokeng Sports Campus in Rustenburg. [6] This new building complex was modernized and improved ahead of the 2010 FIFA World Cup, with the facilities being used by England during the tournament. At that point of time, Platinum Stars also hosted and lost a 3–0 friendly game to the England national football team, being the latter's final warm-up match, ahead of their World Cup opener at 7 June 2010.

As the ambitions of Platinum Stars were higher than the achieved results in the last three seasons, the club decided to re-employ their former top coach Owen Da Gama, for the current 2010–11 season.

In January 2013, Platinum Stars hosted the Algeria national team in a friendly match as part of the latter's preparation for the 2013 Africa Cup of Nations. [7] Algeria won the match 4–1 with Joshua Sauls scoring the lone goal for Platinum Stars from the penalty spot. [8]

In the 2013–14 season, Stars won the MTN8 and the Telkom Knockout, beating Orlando Pirates in both finals. The TKO final was won in spectacular fashion with Mogakolodi Ngele who came in after the 75th minute and scored a brace in the last 12 minutes to win 2–1 after leading 1–0 from the first half. [9]

In July 2014, Stars announced that their new technical sponsor replacing Umbro will be Acelli until 2017. The sponsor also gave the club R3 million. [10] 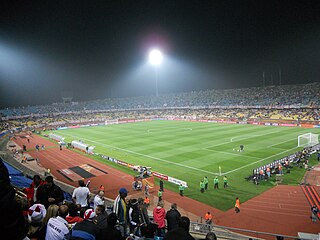 The Royal Bafokeng Sports Palace is a football, rugby and athletics stadium in Phokeng near Rustenburg, South Africa. It was built and is managed by the Royal Bafokeng Nation. It was used as the home stadium for Premier Soccer League club Platinum Stars. The Leopards rugby team host large attendance matches during the Currie Cup at the stadium, instead of their usual home ground, Olën Park.

SuperSport United Football Club is a South African professional football club based in Atteridgeville in Pretoria in the Gauteng province. The team currently plays in the Dstv Premiership. United is known as Matsatsantsa a Pitori amongst its supporters. They usually play their home games at Lucas Moripe Stadium in Atteridgeville. 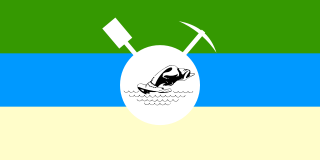 The Royal Bafokeng is the ethnic homeland of the Bafokeng people, a Setswana-speaking traditional community. The monarchy covers 1,000 square kilometers (390 sq mi) in the North West Province of South Africa. The capital is Phokeng, near Rustenburg. "Bafokeng" is used to refer to both the tribal grouping as well as the land its members inhabit. The kingdom's current ruler is Kgosi (King) Leruo Molotlegi, who has reigned since 2000. The Bafokeng first settled in the Rustenburg Valley in c.1450AD, the presence of the ceramics in the area suggesting the arrival of the Bafokeng in the Rustenburg Phokeng valley at about this time. Kgosi Tshukudu became the first king of a unified Bafokeng in 1750.

Gordon Igesund is a former South African football player and coach who was most recently the manager of Highlands Park in the Premier Soccer League.

The Telkom Knockout is a football (soccer) knockout competition which comprises the 16 teams in the South African Premier Soccer League.

Nedbank Cup is a South African club football (soccer) tournament. The knockout tournament, based on the English FA Cup format, carries a 'David versus Goliath' theme. The competition was sponsored by ABSA until 2007, after which Nedbank took over sponsorship.

Cavin Dennis Johnson is a South African soccer coach who currently works as an assistant coach at Al Ahly in the Egyptian Premier League.

The 2017–18 South African Premier Division season is the 22nd season of the Premier Soccer League since its conception in 1996.

The 2017 Telkom Knockout is the 36th edition of the Telkom Knockout, a South African cup competition comprising the 16 teams in the Premier Soccer League. It took place between October and December 2017.

The 2019–20 South African Premier Division season was the 24th season of the Premier Soccer League since its establishment in 1996. The season began in August 2019 and concluded in September 2020. Mamelodi Sundowns were the two-time defending champions. This season's winner will qualify for the 2020–21 CAF Champions League along with the second-placed team. The 3rd placed team and Nedbank Cup winners qualify for the CAF Confederation Cup.

Dino Ben Visser is a South African footballer who most recently played as a goalkeeper for EFL League One club Port Vale.

The 2020–21 South African Premier Division season was the 25th season of the Premier Soccer League since its establishment in 1996. Mamelodi Sundowns were the three-time defending champions. This season's winner will qualify for the 2021–22 CAF Champions League along with the second placed team. The 3rd placed team and Nedbank Cup winners qualify for the 2021–22 CAF Confederation Cup.