The Ponte Coperto ("Covered Bridge") or the Ponte Vecchio ("Old Bridge") is a stone and brick arch bridge over the Ticino River in Pavia, Italy.

The previous bridge, dating from 1354 (itself a replacement for a Roman construction), was heavily damaged by Allied action in 1945. A debate on whether to fix or replace the bridge ended when the bridge partially collapsed in 1947, requiring new construction, which began in 1949. The new bridge is based on the previous one, which had seven arches to the current bridge's five. [2]

The current bridge, like its predecessor, bears a chapel.

In Roman times, in the ancient town of Ticinum, there already was a bridge which connected the two shores of the river Ticino in the same location as the contemporary Ponte Coperto. The base of one of the central piers is still visible nowadays when there are low water levels. The orientation of the pier is proof that in Roman age the direction of the current of the river was different. It is believed that the Roman bridge was built during the Augustan age. [3]

According to the legend, in 999, on Christmas Eve, a few pilgrims wanted to attend the midnight mass in town but, because of the thick fog, their boats could not cross the river. Suddenly, a man in red clothes arrived, and he promised that he would immediately build a bridge in exchange of the first soul crossing the bridge. That man was the devil, and he was recognised only by the Archangel Michael, who had arrived from the church nearby. Michael pretended to accept the deal but, once the bridge was built, a goat crossed it first. The bridge therefore also became known as Ponte del Diavolo ('Devil's Bridge').

In reality, the new bridge was built in 1351 on the ruins of the Roman bridge, following the project of Giovanni da Ferrara and Jacopo da Cozzo. [4] The bridge was completed in 1354: it was covered and it had ten irregular arches and two towers at its ends, used for defence. [5] The appearance of this bridge, although with only six arches, can be observed in Bernardino Lanzani's frescoes (around 1524) in Saint Theodore's Church. During the construction of the Spanish walls, in the 17th century, the first arch and a half on the city's side, and the first arch on the Borgo side were incorporated in the bastions and therefore closed. Subsequently, new elements were added: a portal of entry on Borgo Ticino's side (1599), a chapel in the centre of the bridge in honour of Saint John of Nepomuk (1746), [6] and lastly a portal of entry, built by Carlo Armati (1822), [7] on the side of the historic centre. In the registry office in Mezzabarba Palace, seat of the municipality of Pavia, a wooden model of the 14th-century bridge, built in 1938, is displayed.

The Allied bombings in September 1944 during the Second World War damaged the ancient bridge and destroyed one of its arches. At the end of the war, a debate was opened over the opportunity to fix the old bridge or to demolish it. Due to the fear that any collapse of the bridge could have caused a flood, in February 1948 the Ministry of Public Works ordered the demolition of the ancient artifact.

A few remains of the piers of the ancient bridge are still visible in the waters of the River.

The construction of the new bridge began in 1949, and its inauguration took place in 1951. An epigraph was placed on the portal of entry on the city's side with the words: Sull'antico varco del ceruleo Ticino, ad immagine del vetusto Ponte Coperto, demolito dalla furia della guerra, la Repubblica Italiana riedificò ('On the ancient passage of the cerulean Ticino river, in the likeness of the old Ponte Coperto, demolished by the war, the Italian Republic rebuilt').

The bridge was built around 30 metres (98 ft) further downstream than the previous one, larger and higher. The arches are larger, therefore fewer (five instead of seven). The bridge is also shorter, as it is positioned exactly perpendicular to the river's current. The old one instead followed the line which links Strada Nuova (in the city centre) and Piazzale Ghinaglia (in Borgo Ticino). The changes in the project were aimed at improving the road conditions on the bridge and facilitating the flows of the water of the river.

In 2005, on the occasion of the 50th anniversary of the death of Albert Einstein, a plaque was placed in the central portion of the bridge. The plaque reads An die schöne Brücke in Pavia habe ich oft gedacht ('I have often thought about that beautiful bridge in Pavia'), a quote from a letter written by the scientist in 1947 to an Italian friend which referred to a period of time Einstein had spent in Pavia when he was 15 years old.

The bridge was shown in a famous scene of the film The Overcoat , by Alberto Lattuada, depicting the poor clerk Carmine De Carmine, played by Renato Rascel. 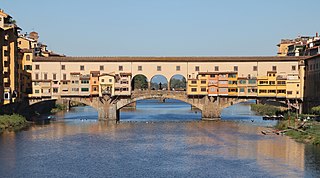 The Ponte Vecchio is a medieval stone closed-spandrel segmental arch bridge over the Arno River, in Florence, Italy. The only bridge in Florence spared from destruction during the Second World War, it is noted for the shops built along it; building shops on such bridges was once a common practice. Butchers, tanners, and farmers initially occupied the shops; the present tenants are jewelers, art dealers, and souvenir sellers. The Ponte Vecchio's two neighboring bridges are the Ponte Santa Trinita and the Ponte alle Grazie. 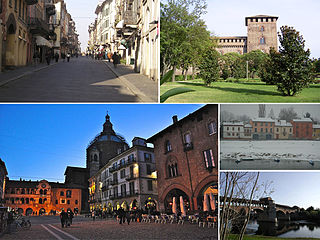 Pavia is a town and comune of south-western Lombardy in northern Italy, 35 kilometres south of Milan on the lower Ticino river near its confluence with the Po. It has a population of c. 73,086. The city was the capital of the Ostrogothic Kingdom from 540 to 553, of the Kingdom of the Lombards from 572 to 774, of the Kingdom of Italy from 774 to 1024 and seat of the Visconti court from 1365 to 1413. 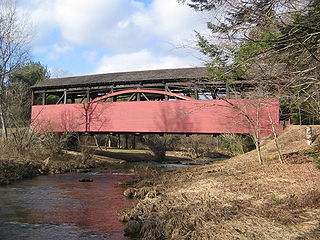 A covered bridge is a timber-truss bridge with a roof, decking, and siding, which in most covered bridges create an almost complete enclosure. The purpose of the covering is to protect the wooden structural members from the weather. Uncovered wooden bridges typically have a lifespan of only 20 years because of the effects of rain and sun, but a covered bridge could last over 100 years. In the United States, only about 1 in 10 survived the 20th century. The relatively small number of surviving bridges is due to deliberate replacement, neglect, and the high cost of restoration. 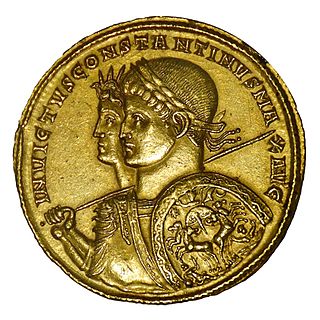 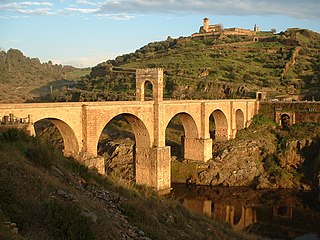 The ancient Romans were the first civilization to build large, permanent bridges. Early Roman bridges used techniques introduced by Etruscan immigrants, but the Romans improved those skills, developing and enhancing methods such as arches and keystones. There were three major types of Roman bridge: wooden, pontoon, and stone. Early Roman bridges were wooden, but by the 2nd century stone was being used. Stone bridges used the arch as their basic structure, and most used concrete, the first use of this material in bridge-building. 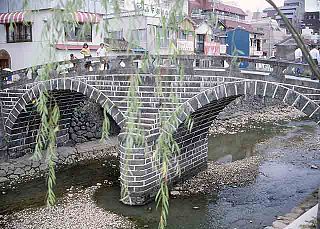 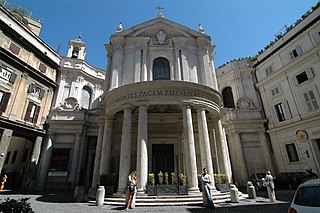 Ponte is the 5th rione of Rome, identified by the initials R. V, and is located in Municipio I. Its name comes from Ponte Sant'Angelo, which connects Ponte with the rione of Borgo. This bridge was built by Emperor Hadrian in 134 AD to connect his mausoleum to the rest of the city. Though Pope Sixtus V changed the rione limits, so that the bridge belongs now to Borgo, not to Ponte anymore, the area has kept its name and a bridge as its coat of arms. 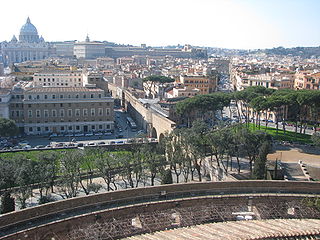 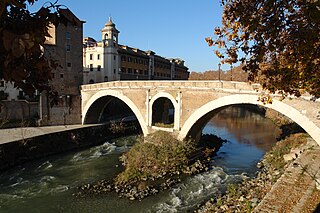 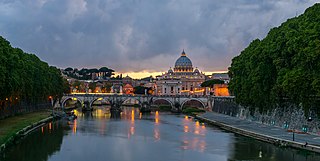 Ponte Sant'Angelo, originally the Aelian Bridge or Pons Aelius, is a Roman bridge in Rome, Italy, completed in 134 AD by Roman Emperor Hadrian, to span the Tiber from the city centre to his newly constructed mausoleum, now the towering Castel Sant'Angelo. The bridge is faced with travertine marble and spans the Tiber with five arches, three of which are Roman; it was approached by means of a ramp from the river. The bridge is now solely pedestrian and provides a scenic view of Castel Sant'Angelo. It links the rioni of Ponte, and Borgo, to whom the bridge administratively belongs. 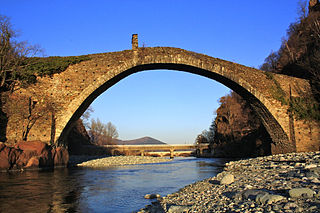 Devil's Bridge is a term applied to dozens of ancient bridges, found primarily in Europe. Most of these bridges are stone or masonry arch bridges and represent a significant technological achievement in ancient architecture. Due to their unusual design, they were an object of fascination and stories in antiquity and medieval Europe.

The Castel Vecchio Bridge or Scaliger Bridge is a fortified bridge in Verona, northern Italy, over the Adige River. The segmental arch bridge featured the world's largest span at the time of its construction.

The Ponte San Lorenzo is a Roman bridge over the river Bacchiglione in Padua, Italy. Constructed between 47 and 30 BC, it is one of the very earliest segmental arched bridges in the world. It is also notable for the slenderness of its piers, unsurpassed in antiquity.

Ponte Vecchio may refer to:

The following is a timeline of the history of the city of Pavia in the Lombardy region of Italy. 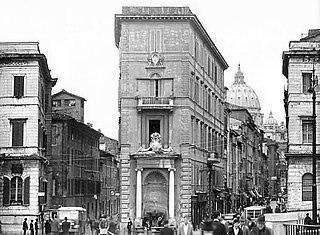 Borgo Nuovo, originally known as via Alessandrina, also named via Recta or via Pontificum, was a road in the city of Rome, Italy, important for historical and architectural reasons. Built by Pope Alexander VI Borgia for the holy year of 1500, the road became one of the main centers of the high Renaissance in Rome. Borgo Nuovo was demolished together with the surrounding quarter in 1936–37 due to the construction of Via della Conciliazione. 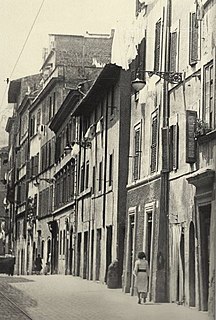 Borgo Vecchio, also named in the Middle Ages Via Sancta, Carriera Sancta or Carriera Martyrum, was a road in the city of Rome, Italy, important for historical and architectural reasons. The road was destroyed together with the adjacent quartier in 1936–37 due to the construction of Via della Conciliazione. 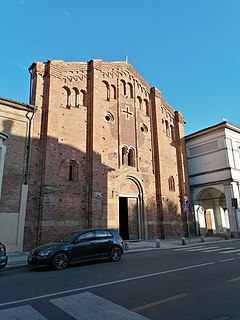 The church of Santa Maria in Betlem, founded around 1130, stands in the characteristic district of the Borgo of Pavia, located, after the Ponte Coperto, on the other bank of the Ticino river from the city center.