The profit margin is used mostly for internal comparison. It is difficult to accurately compare the net profit ratio for different entities. Individual businesses' operating and financing arrangements vary so much that different entities are bound to have different levels of expenditure, so that comparison of one with another can have little meaning. A low profit margin indicates a low margin of safety: higher risk that a decline in sales will erase profits and result in a net loss, or a negative margin.

Profit margin is an indicator of a company's pricing strategies and how well it controls costs. Differences in competitive strategy and product mix cause the profit margin to vary among different companies. [2]

On the other hand, profit percentage is calculated with cost price taken as base

In accounting, revenue is the income or increase in net assets that an entity has from its normal activities. Commercial revenue may also be referred to as sales or as turnover. Some companies receive revenue from interest, royalties, or other fees. "Revenue" may refer to income in general, or it may refer to the amount, in a monetary unit, earned during a period of time, as in "Last year, Company X had revenue of $42 million". Profits or net income generally imply total revenue minus total expenses in a given period. In accounting, in the balance statement, revenue is a subsection of the Equity section and revenue increases equity, it is often referred to as the "top line" due to its position on the income statement at the very top. This is to be contrasted with the "bottom line" which denotes net income. 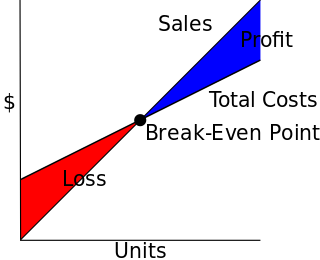 The break-even point (BEP) in economics, business—and specifically cost accounting—is the point at which total cost and total revenue are equal, i.e. "even". There is no net loss or gain, and one has "broken even", though opportunity costs have been paid and capital has received the risk-adjusted, expected return. In short, all costs that must be paid are paid, and there is neither profit or loss.

The dividend yield or dividend-price ratio of a share is the dividend per share, divided by the price per share. It is also a company's total annual dividend payments divided by its market capitalization, assuming the number of shares is constant. It is often expressed as a percentage.

In economics and accounting, the cost of capital is the cost of a company's funds, or, from an investor's point of view "the required rate of return on a portfolio company's existing securities". It is used to evaluate new projects of a company. It is the minimum return that investors expect for providing capital to the company, thus setting a benchmark that a new project has to meet.

In a tax system, the tax rate is the ratio at which a business or person is taxed. There are several methods used to present a tax rate: statutory, average, marginal, and effective. These rates can also be presented using different definitions applied to a tax base: inclusive and exclusive.

DuPont analysis is an expression which breaks ROE into three parts.

In finance, leverage is any technique involving using debt rather than fresh equity in the purchase of an asset, with the expectation that the after-tax profit to equity holders from the transaction will exceed the borrowing cost, frequently by several multiples ⁠— hence the provenance of the word from the effect of a lever in physics, a simple machine which amplifies the application of a comparatively small input force into a correspondingly greater output force. Normally, the lender will set a limit on how much risk it is prepared to take and will set a limit on how much leverage it will permit, and would require the acquired asset to be provided as collateral security for the loan.

The return on equity (ROE) is a measure of the profitability of a business in relation to the equity. Because shareholder's equity can be calculated by taking all assets and subtracting all liabilities, ROE can also be thought of as a return on assets minus liabilities. ROE measures how many dollars of profit are generated for each dollar of shareholder's equity. ROE is a metric of how well the company utilizes its equity to generate profits.

Gross margin is the difference between revenue and cost of goods sold (COGS), divided by revenue. Gross margin is expressed as a percentage. Generally, it is calculated as the selling price of an item, less the cost of goods sold, then divided by the same selling price. "Gross margin" is often used interchangeably with "gross profit", however the terms are different: "gross profit" is technically an absolute monetary amount and "gross margin" is technically a percentage or ratio. 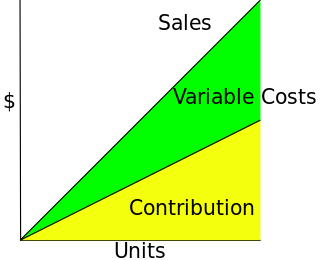 Contribution margin (CM), or dollar contribution per unit, is the selling price per unit minus the variable cost per unit. "Contribution" represents the portion of sales revenue that is not consumed by variable costs and so contributes to the coverage of fixed costs. This concept is one of the key building blocks of break-even analysis.

Price–sales ratio, P/S ratio, or PSR, is a valuation metric for stocks. It is calculated by dividing the company's market capitalization by the revenue in the most recent year; or, equivalently, divide the per-share stock price by the per-share revenue.

Capitalization rate is a real estate valuation measure used to compare different real estate investments. Although there are many variations, a cap rate is often calculated as the ratio between the net operating income produced by an asset and the original capital cost or alternatively its current market value.

In finance, return is a profit on an investment. It comprises any change in value of the investment, and/or cash flows which the investor receives from that investment, such as interest payments, coupons, cash dividends, stock dividends or the payoff from a derivative or structured product. It may be measured either in absolute terms or as a percentage of the amount invested. The latter is also called the holding period return.

Accounting rate of return, also known as the Average rate of return, or ARR is a financial ratio used in capital budgeting. The ratio does not take into account the concept of time value of money. ARR calculates the return, generated from net income of the proposed capital investment. The ARR is a percentage return. Say, if ARR = 7%, then it means that the project is expected to earn seven cents out of each dollar invested (yearly). If the ARR is equal to or greater than the required rate of return, the project is acceptable. If it is less than the desired rate, it should be rejected. When comparing investments, the higher the ARR, the more attractive the investment. More than half of large firms calculate ARR when appraising projects.

A financial ratio or accounting ratio is a relative magnitude of two selected numerical values taken from an enterprise's financial statements. Often used in accounting, there are many standard ratios used to try to evaluate the overall financial condition of a corporation or other organization. Financial ratios may be used by managers within a firm, by current and potential shareholders (owners) of a firm, and by a firm's creditors. Financial analysts use financial ratios to compare the strengths and weaknesses in various companies. If shares in a company are traded in a financial market, the market price of the shares is used in certain financial ratios.