In the mathematical field of knot theory, a quantum knot invariant or quantum invariant of a knot or link is a linear sum of colored Jones polynomial of surgery presentations of the knot complement. [1] [2] [3] 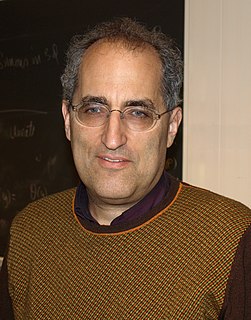 Nicolai Yuryevich Reshetikhin is a mathematical physicist, currently a professor of mathematics at the University of California, Berkeley and a professor of mathematical physics at the University of Amsterdam. His research is in the fields of low-dimensional topology, representation theory, and quantum groups. His major contributions are in the theory of quantum integrable systems, in representation theory of quantum groups and in quantum topology. He and Vladimir Turaev constructed invariants of 3-manifolds which are expected to describe quantum Chern-Simons field theory introduced by Edward Witten.

In knot theory, the Kauffman polynomial is a 2-variable knot polynomial due to Louis Kauffman. It is initially defined on a link diagram as

Victor Anatolyevich Vassiliev or Vasilyev, is a Soviet and Russian mathematician. He is best known for his discovery of the Vassiliev invariants in knot theory, which subsume many previously discovered polynomial knot invariants such as the Jones polynomial. He also works on singularity theory, topology, computational complexity theory, integral geometry, symplectic geometry, partial differential equations, complex analysis, combinatorics, and Picard–Lefschetz theory.

In the branch of mathematics called knot theory, the volume conjecture is the following open problem that relates quantum invariants of knots to the hyperbolic geometry of knot complements.

Serguei Barannikov is a mathematician, known for his works in algebraic topology, algebraic geometry and mathematical physics.