The younger Fabius was a military tribune in 216 BC, and was among the survivors of the Battle of Cannae who ended up at Canusium. [1] In 215, he was curule aedile. [2] As praetor in 214, he commanded two legions with which he captured Acuca in Luceria as well as a fortified camp near Ardoneae. [3]

As consul for the following year, he took over his father's command of the army in Apulia and recaptured Arpi. [4] He seems to have remained in Arpi with a few troops as a legatus , a legate or lieutenant, in 212 BC. [5] In 209–208, he was serving still or again as a legatus during his father's fifth consulship. The elder Fabius sent him to recover the survivors of the army under Gnaeus Fulvius Centumalus, who had been killed in a surprise attack by Hannibal in 210. They accompanied him to Sicily, where Fabius took over the legions and fleet assigned to the proconsul Marcus Valerius Laevinus. [6] In 208, he was sent by the senate to the army at Venusia. [7] He may have been the envoy of the consul Marcus Livius Salinator in 207 who reported to the senate that it was safe to withdraw the consular army from Cisalpine Gaul. [8]

The gens Fabia was one of the most ancient patrician families at ancient Rome. The gens played a prominent part in history soon after the establishment of the Republic, and three brothers were invested with seven successive consulships, from 485 to 479 BC, thereby cementing the high repute of the family. Overall, the Fabii received 45 consulships during the Republic. The house derived its greatest lustre from the patriotic courage and tragic fate of the 306 Fabii in the Battle of the Cremera, 477 BC. But the Fabii were not distinguished as warriors alone; several members of the gens were also important in the history of Roman literature and the arts.

A dictator was a magistrate of the Roman Republic, entrusted with the full authority of the state to deal with a military emergency or to undertake a specific duty. All other magistrates were subordinate to his imperium, and the right of the plebeian tribunes to veto his actions or of the people to appeal from them was extremely limited. In order to prevent the dictatorship from threatening the state itself, severe limitations were placed upon its powers, as a dictator could only act within his intended sphere of authority, and was obliged to resign his office once his appointed task had been accomplished, or at the expiration of six months. Dictators were frequently appointed from the earliest period of the Republic down to the Second Punic War, but the magistracy then went into abeyance for over a century, until it was revived in a significantly modified form, first by Sulla between 82 and 79 BC, and then by Julius Caesar between 49 and 44 BC. The office was formally abolished after the death of Caesar, and not revived under the Empire.

Quintus Fabius Q. f. M. n. Maximus Gurges, the son of Quintus Fabius Maximus Rullianus, was consul in 292, 276, and 265 BC. After a dissolute youth and a significant military defeat during his first consulate, he was given the opportunity to salvage his reputation through the influence of his father, and became a successful general, eventually holding the highest honours of the Roman state. He was slain in battle during his third and final consulate. 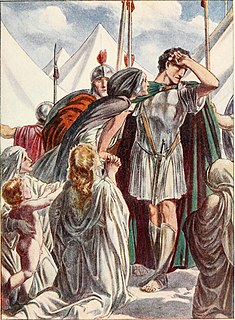 The gens Marcia, occasionally written Martia, was one of the oldest and noblest houses at ancient Rome. They claimed descent from the second and fourth Roman Kings, and the first of the Marcii appearing in the history of the Republic would seem to have been patrician; but all of the families of the Marcii known in the later Republic were plebeian. The first to obtain the consulship was Gaius Marcius Rutilus in 357 BC, only a few years after the passage of the lex Licinia Sextia opened this office to the plebeians.

Quintus Fabius Maximus Eburnus was a Roman statesman of the patrician gens Fabia. He was consul in 116 BC.

Lucius Valerius Flaccus was a Roman politician and general. He was consul in 195 BC and censor in 183 BC, serving both times with his friend Cato the Elder, whom he brought to the notice of the Roman political elite.

Fabius Ambustus was a name used by ancient Roman men from a branch of the gens Fabia, including:

Lucius Lucretius Tricipitinus was a Roman senator in the fifth century BC, and was consul with Titus Veturius Geminus Cicurinus in 462 BC.

Marcus Fabius Vibulanus was consul of the Roman republic in 442 BC and consular tribune in 433 BC.