Ragasiya is trained in various dance styles. She learned kathak from Guru Viru Maharaj and later from Habiba and Saroj Khan. She then learned hip-hop under Ganesh Hegde and was trained in salsa by Sandeep Soparkar.

She started her career as an assistant choreographer to Pony Verma, Longie Fernandes, Raju Khan and later she started doing theaters with Gary Richardson for Mad Horses. She started her modelling career by doing catalogue shoot for "roopam" owned by Viren Shah, walked on ramp for Nisha Jhampwal, Umer Zafer. Saran who also rechristened her as Ragasiya. After that she did many promotional item numbers mostly in Tamil films. [1] She has also played supporting roles in films like Indira Vizha [2] and Velmurugan Borewells. [3] '.

Priyanka Kothari, often credited as Nisha Kothari or Amoha, is an actress and model. She has appeared in Bollywood, Telugu, Tamil and Kannada films. She has frequently appeared in Ram Gopal Varma films.

Chaya Singh is an Indian film and television actress. She started her acting career in Kannada films and has worked in Tamil, Kannada, Malayalam, Telugu, Bengali and Bhojpuri films. She has a reputation of being very selective in her roles.

Bindu Madhavi is an Indian model and film actress, working in Tamil and Telugu cinema. After starting her acting career in Telugu, she shifted to Tamil cinema where she was part of several successful films including Veppam (2011), Kazhugu (2012), Kedi Billa Killadi Ranga (2013) and Pasanga 2 (2015).

Elsa George, better known by her stage name Muktha in the Malayalam film industry and by Bhanu in the Tamil film industry, is an Indian film and television actress. She is also a classical dancer and an entrepreneur.

Edara Aryan Rajesh is an Indian film actor who appears in Tollywood films. He is the son of Telugu veteran director and producer E. V. V. Satyanarayana. He has played the lead in 14 Telugu films.

Pranitha Subhash is an Indian film actress, model who predominantly appears in Kannada, Telugu and Tamil films. She was raised in Bangalore and pursued a career in modelling before plunging into films. She debuted as an actor in the 2010 Kannada film, Porki, a remake of Telugu film Pokiri, and in the same year starred in the Telugu film, Em Pillo Em Pillado. Her Tamil debut was with the film Udhayan (film) (2011). She went on to appear in several commercially successful Telugu and Tamil films like Baava (2010), Attarintiki Daredi (2013), Massu Engira Masilamani (2015) opposite Suriya and Enakku Vaaitha Adimaigal opposite Jai. In 2012, she starred in a critically acclaimed parallel cinema, Bheema Theeradalli for which she was nominated for Filmfare award for Best Kannada actress and SIIMA award for Best Kannada actress.

Anjali Lavania is an Indian supermodel, a holistic Life Coach and a film actress. She made her acting debut in the 2011 Telugu film Panjaa, starring Pawan Kalyan.

Ramya Barna Fahaad is an Indian film actress, primarily appearing in Kannada films. She made her acting debut in 2008, starring in Neenyare and went on to appear in several commercially successful films and also did an artistic film in Tulu language. She has also made appearances in Tamil and Telugu films. She married to Fahaad on 29 may 2017 who is a well known businessman.

Divya Vishwanath, also known as Divya Padmini, is an actress working for the Malayalam and Tamil Television and Film industries.

Nazriya Nazim is an Indian film actress and producer, who predominantly works in Malayalam Cinema along with a few Tamil films.

Isha Talwar is an Indian film actress who predominantly works in Malayalam cinema and Hindi cinema, besides appearing in a few films in Tamil and Telugu cinema. She started out as a model and appeared in various commercials, and later made her film debut with the 2012 Malayalam film Thattathin Marayathu.

Nandita Swetha is an Indian film actress, who predominantly appears in Tamil & Telugu films. Swetha began her acting career in a Kannada film, Nanda Loves Nanditha. Later she made her acting debut in Tamil Language with the 2012 comedy film Attakathi. She made her Telugu debut with the 2016 horror comedy film Ekkadiki Pothavu Chinnavada.

Sija Rose is an Indian actress, who mostly appears in Malayalam and Tamil films. She has also hosted a few shows in Malayalam.

Smilie Suri or Smiley Suri is an Indian model, actress and dancer, who appears in Bollywood films. Suri made her Bollywood debut with the 2005 film, Kalyug, which was her brother's directorial debut as well. The film turned out to be a certified box office huge success.

Gurleen Chopra also known as Gurlen Siingh Chopraa is an Indian actress and model. She has appeared in Hindi, Telugu, Tamil, Marathi, Kannada and Punjabi films. 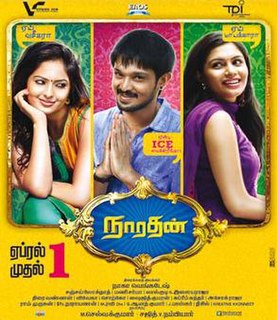 Nikki Galrani is an Indian film actress, model and fashion designer who works predominantly in Tamil and Malayalam films. Her first major commercial successful films are in Malayalam language 1983 (2014), Vellimoonga (2014) and in the Tamil language horror film Darling in 2015. The media began referring to Galrani as the "Darling" of Tamil cinema. She has established a career in South Indian film industries as a leading actress, and she is a recipient of several awards. Kochi Times placed her fifth in their list of the "25 Most Desirable Women of 2015".

Sana Makbul is an Indian model and actress. Makbul was born in Mumbai, where she grew up. Her mother is a Malayali. She studied at National College.