Rats and Cats is a 2007 Australian comedy film directed by Tony Rogers and starring Adam Zwar and Jason Gann.

The black rat, also known as the roof rat, ship rat, or house rat, is a common long-tailed rodent of the stereotypical rat genus Rattus, in the subfamily Murinae. It likely originated in the Indian subcontinent, but is now found worldwide. 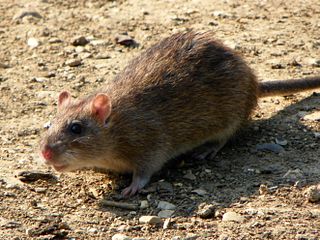 The brown rat, also known as the common rat, street rat, sewer rat, wharf rat, Hanover rat, Norway rat, Norwegian rat and Parisian rat, is a widespread species of common rat. One of the largest muroids, it is a brown or grey rodent with a head and body length of up to 28 cm (11 in) long, and a tail slightly shorter than that. It weighs between 140 and 500 g. Thought to have originated in northern China, this rodent has now spread to all continents except Antarctica, and is the dominant rat in Europe and much of North America. With rare exceptions, the brown rat lives wherever humans live, particularly in urban areas.

The fancy rat is the domesticated form of Rattus norvegicus, the brown rat, and the most common species of rat kept as a pet. The name fancy rat derives from the idea of animal fancy or the phrase "to fancy". Wild-caught specimens that become docile and are bred for many generations still fall under the fancy type.

Cypermethrin (CP) is a synthetic pyrethroid used as an insecticide in large-scale commercial agricultural applications as well as in consumer products for domestic purposes. It behaves as a fast-acting neurotoxin in insects. It is easily degraded on soil and plants but can be effective for weeks when applied to indoor inert surfaces. Exposure to sunlight, water and oxygen will accelerate its decomposition. Cypermethrin is highly toxic to fish, bees and aquatic insects, according to the National Pesticides Telecommunications Network (NPTN). It is found in many household ant and cockroach killers, including Raid, Ortho, Combat, and ant chalk. 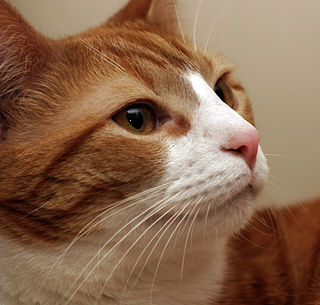 Whiskers or vibrissae are a type of mammalian hair that are typically characterised, anatomically, by their long length, large and well-innervated hair follicle, and by having an identifiable representation in the somatosensory cortex of the brain. 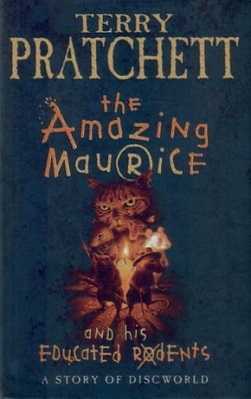 The Amazing Maurice and His Educated Rodents is a children's fantasy novel by British writer Terry Pratchett, published by Doubleday in 2001. It is the 28th novel in the Discworld series and the first written for children. The story is a new take on the German fairy tale about the Pied Piper of Hamelin and a parody of the folk tale genre.

The American Shorthair (ASH) is a breed of domestic cat believed to be descended from European cats brought to North America by early settlers to protect valuable cargo from mice and rats. According to the Cat Fanciers' Association, in 2012, it was the seventh most popular pedigreed cat in the United States. 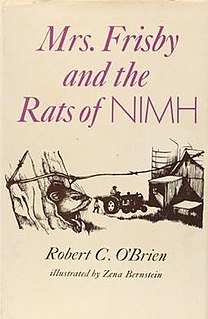 Mrs. Frisby and the Rats of NIMH is a 1971 children's book by Robert C. O'Brien, with illustrations by Zena Bernstein. The winner of the 1972 Newbery Medal, the story was adapted for film as The Secret of NIMH (1982).

Murine typhus, also known as endemic typhus or flea-borne typhus, is a form of typhus transmitted by fleas, usually on rats, in contrast to epidemic typhus which is usually transmitted by lice. Murine typhus is an under-recognized entity, as it is often confused with viral illnesses. Most people who are infected do not realize that they have been bitten by fleas. Historically term "hunger-typhus" was used for instance in accounts by British POWs in Germany at the end of World War I when they described conditions in Germany.

The Night Watchman is a 1938 Warner Bros. Merrie Melodies cartoon directed by Chuck Jones. The short was released on November 19, 1938.

The farm cat, also known as a barn cat, is a domestic cat, usually of mixed breed, that lives primarily out-of-doors, in a feral or semi-feral condition on agricultural properties, usually sheltering in outbuildings. They eat assorted vermin such as rodents and other small animals that live in or around outbuildings and farm fields. The need for the farm cat may have been the original reason cats were domesticated, to keep rodents from consuming or contaminating grain crops stored for later human consumption. They are still commonly kept for their effectiveness at controlling undesired vermin found on farms, ranches, greenhouses, and even drug farms, which would otherwise eat or contaminate crops, especially grain or feed stocks. Farm cats hunt the initial rodent population, and their pheromones keep further rodents from filling the void. 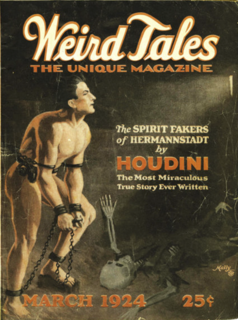 "The Rats in the Walls" is a short story by American author H. P. Lovecraft. Written in August–September 1923, it was first published in Weird Tales, March 1924.

The Cat and the Mice is a fable attributed to Aesop of which there are several variants. Sometimes a weasel is the predator; the prey can also be rats and chickens.

The Gambian pouched rat, also known commonly as the African giant pouched rat, is a species of nocturnal pouched rat of the giant pouched rat genus Cricetomys, in the family Nesomyidae. The species is among the largest muroids in the world, growing up to about 0.9 metres (3 ft) long including the tail which makes up half of its total length. It is widespread in Sub-Saharan Africa, ranging geographically from Senegal to Kenya and from Angola to Mozambique and in altitude from sea level to 2,000 metres (6,600 ft). 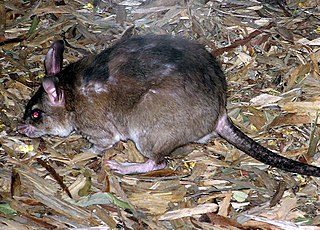 The Malagasy giant rat, also known as the votsotsa or votsovotsa, is a nesomyid rodent found only in the Menabe region of Madagascar. It is an endangered species due to habitat loss, slow reproduction, and limited range Pairs are monogamous and females bear only one or two young per year. It is the only extant species in the genus Hypogeomys; another species, Hypogeomys australis, is known from subfossil remains a few thousand years old.

River Rats is a Hardy Boys novel from the Casefiles series, published in 1997.

6-Chloro-2-aminotetralin (6-CAT) is a drug which acts as a selective serotonin releasing agent (SSRA) and is a putative entactogen in humans. It is a rigid analogue of para-chloroamphetamine (PCA).

Paying the Piper is a 1949 Warner Bros. Looney Tunes cartoon directed by Robert McKimson. The short was released on March 12, 1949, and stars Porky Pig.

Bokays and Brickbatz is a 1925 silent short animated film featuring Krazy Kat. It is among the few films of the character to be directed by Bill Nolan who earlier worked on Felix the Cat films. The title is a play on the phrase "bouquets and brickbats" which is used as a section in some newspapers.