The Courier-Mail is an Australian conservative newspaper published in Brisbane. Owned by News Corp Australia, it is published daily from Monday to Saturday in tabloid format. Its editorial offices are located at Bowen Hills, in Brisbane's inner northern suburbs, and it is printed at Murarrie, in Brisbane's eastern suburbs. It is available for purchase throughout Queensland, most regions of Northern New South Wales and parts of the Northern Territory.

The Moreton Bay Courier was established as a weekly paper in June 1846. Issue frequency increased steadily to bi-weekly in January 1858, tri-weekly in December 1859, then daily under the editorship of Theophilus Parsons Pugh from 14 May 1861. The recognised founder and first editor was Arthur Sidney Lyon (1817–1861) who was assisted by its printer, James Swan (1811–1891), the later mayor of Brisbane and member of Queensland Legislative Council. Lyon, also referred to as the "father of the Press" in the colony of Queensland, had previously served as a writer and journalist in Melbourne, and later moved on to found and edit journals such as Moreton Bay Free Press, North Australian and Darling Downs Gazette . [2] Lyon was encouraged to emigrate by Rev. Dr. John Dunmore Lang and arrived in Brisbane from Sydney in early 1846 to establish a newspaper. He persuaded James Swan, a printer of Lang's Sydney newspaper The Colonialist to join him. Lyon and Swan established themselves on the corner of Queen Street and Albert Street, Brisbane, in a garret of a building later known as the North Star Hotel. The first issue of the Moreton Bay Courier, consisting of 4 pages, appeared weekly on Saturday 20 June 1846, with Lyon as editor and Swan as publisher.

After some 18 months, Lyon and Swan disagreed on many aspects of editorial policy, including transportation of convicts and squatting. Lyon took over sole control in late 1847, but had money problems, and gave sole control to Swan. Swan sold out to Thomas Blacket Stephens in about November 1859. [3] [4] [5] The Moreton Bay Courier became The Courier, and then the Brisbane Courier in 1864. In June–July 1868, Stephens floated a new company, and transferred the plant and copyright of the Brisbane Courier to "The Brisbane Newspaper Company". [6] He was the managing director until retired in November 1873, when the paper was auctioned. [7] [8]

The Journal was, from November 1873 to December 1880, managed by one of the new part owners, the Tasmanian-born former public servant Gresley Lukin (1840–1916). Although called 'managing editor', actual writing and editing was by William Augustine O'Carroll (1831–1885). Most prominent of the various editors and sub-editors of the Queenslander 'literary staff' were William Henry Traill (1842–1902), later NSW politician and editor of the famed Sydney journal 'The Bulletin', and Carl Adolph Feilberg (1844–1887), who was Danish born but from the age of six educated in England and later in France. Carl Feilberg followed William Henry Trail in the role of political commentator and the de facto editor of the Queenslander to January 1881. He succeeded William O'Carroll as Courier editor-in-chief from September 1883 to his death in October 1887. Lukin's roles as part owner-editor changed on 21 December 1880. Charles Hardie Buzacott (1835–1918), former 'Postmaster General' in the first McIlwraith government, had been a staff journalist. John James Knight (1863–1927) was editor-in-chief of the Brisbane Courier 1906–16, later managing director, then chairman of all the company's publications. [9]

The first edition of The Courier-Mail was published on 28 August 1933, after Keith Murdoch's Herald and Weekly Times acquired and merged the Brisbane Courier and the Daily Mail (first published on 3 October 1903). In 1987, Rupert Murdoch's News Limited acquired newspaper control, and outstanding shares of Queensland Newspapers Pty Ltd. [10]

The Courier-Mail was inducted into the Queensland Business Leaders Hall of Fame in 2015. [11] [12]

The Courier-Mail is a right leaning newspaper with four editorial endorsements for the Coalition to one for Labor in the period 1996–2007. [13] The Courier-Mail generally supports free market economic policies and the process of globalisation. It supported the 2003 invasion of Iraq.[ citation needed ]

According to third-party web analytics providers Alexa and SimilarWeb, Courier-Mail's website is the 141st and 273rd most visited in Australia respectively, as of August 2015. [17] [18] At the same time, SimilarWeb rated the site as the 25th most visited news website in Australia, attracting almost 2.6 million visitors per month. [18] [19]

Prominent journalists and columnists include Terry Sweetman and Mike O'Connor. Its current Editor is Lachlan Heywood. Its editorial cartoonist is Sean Leahy. Its National Political Correspondent is Steven Scott. For thirty years, the paper's senior rugby league football journalist was former Australian vice-captain Jack Reardon. Sports Editor at The Courier Mail, Tom Linneth became the youngest editor in Australia in 1960 at the age of 29. He worked at the Courier Mail between about 1948 to 1974 and again worked there as the sports editor between about 1982 until he retired in 1996.

From its inception until March 2006 The Courier-Mail was a broadsheet newspaper. On 14 December 2005 it was announced that the paper would change to a tabloid sometime in early 2006, however the term "tabloid" was not used in favour of the term "compact". [21] This linguistic choice was probably related to widespread public view that many tabloids, including those published by News Limited, were low quality publications (see tabloid for discussion of this size and quality issue). Much emphasis was made that it was merely the paper size that was changing and not the journalistic quality. The last broadsheet edition was published on Saturday 11 March 2006, and the first tabloid edition was published on Monday 13 March 2006. On the same day, the paper's website was revamped and expanded.

The change to a tabloid format brought The Courier-Mail in line with all other News Limited Australian metropolitan daily newspapers. This followed the change to a tabloid format by The Advertiser of Adelaide—another News Corporation newspaper—some years earlier. Despite the claims that there would be no loss of journalistic quality, The Courier-Mail in its "compact" format is not well regarded for its journalism, e.g. the 'Crikey' website described it as "one of the contestants in a close run field for worst paper in Australia". [22] In August 2011, police and the parents of a murder victim criticized the paper for falsely accusing their son of a child sex crime. [23]

On 24 March 2014 Queensland Newspapers, the News Corp Australia subsidiary responsible for publishing the Courier-Mail, was found guilty by a District Court of breaching restrictions on publishing Family Court proceedings on four occasions and fined a total of $120,000. The breaches occurred in 2012 when the Courier-Mail published on its front page the names and photos of a mother and her children involved in a Family Court dispute. District Court Justice Terence Martin said: "It seems to me that the newspaper seized upon what it regarded as a sensational story, which would be attractive to readers, and put the story ahead of its legal obligations". [24]

The Courier-Mail has been viewed as controversial on several occasions. One particular instance, on 7 October 2014, the paper published a transphobic headline related to the gruesome murder of Mayang Prasetyo. [25] It also raised controversy for depicting Indonesian president Joko Widodo with a doctored photo of bloody hands to protest against the country's decision to execute two Australian convicted drug smugglers known as part of the Bali Nine. [26]

Pre-1955 issues of the newspaper have been digitised as part of the Australian Newspapers Digitisation Program of the National Library of Australia. [27] [28]

The Sunday Mail is Brisbane's only Sunday newspaper. The Sunday Mail is published in tabloid format, comprising several sections that can be extracted and read separately. It is available for purchase throughout Queensland, most regions of Northern New South Wales and parts of the Northern Territory.

William Henry Traill was an Australian journalist and politician, commonly referred to as W. H. Traill. He was an early editor and for a period the principal proprietor of The Bulletin in Sydney. 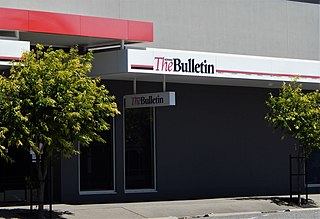 The Morning Bulletin is an online newspaper servicing the city of Rockhampton and the surrounding areas of Central Queensland, Australia.

The Telegraph was an evening newspaper published in Brisbane, Queensland, Australia. It was first published on 1 October 1872 and its final edition appeared on 5 February 1988. In its day it was recognised as one of the best news pictorial newspapers in the country. Its Pink Sports edition was a particularly excellent production produced under tight deadlines. It included results and pictures of Brisbane's Saturday afternoon sports including the results of the last horse race of the day.

The Fraser Coast Chronicle is a daily newspaper serving the Fraser Coast area in Queensland, Australia. It was started as the Maryborough Chronicle, Wide Bay and Burnett Advertiser. 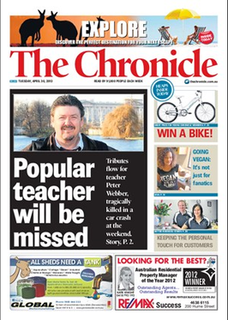 The Toowoomba Chronicle is a daily newspaper serving Toowoomba, the Lockyer Valley and Darling Downs regional areas in Queensland, Australia. 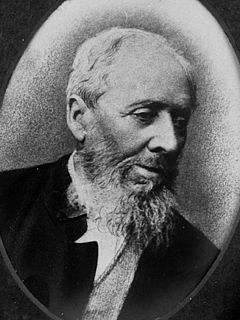 Arthur Sidney Lyon (1817–1861), was a journalist and newspaper proprietor in Queensland, Australia. He was known as "the father of the press in colonial Queensland". He was the founder of the Moreton Bay Courier and the Darling Downs Gazette. 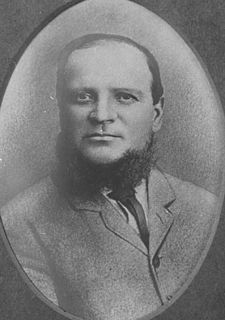 The North Australian, Ipswich and General Advertiser was the first newspaper published in Ipswich, Queensland, Australia. It was commonly called the North Australian as those words appeared most prominently on its masthead.

The Daily Mail was a newspaper published in Brisbane, Queensland, Australia from 1903 to 1933. 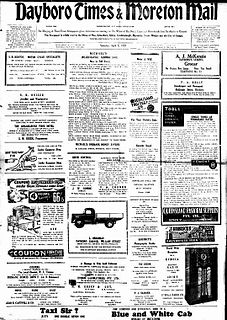 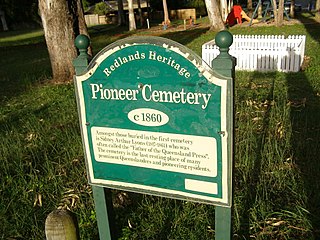 Cleveland Pioneer Cemetery is a heritage-listed cemetery at Lisa Street, Cleveland, City of Redland, Queensland, Australia. It is also known as Cleveland No.1 Cemetery. It was added to the Queensland Heritage Register on 18 September 2009.

Arthur Morley Francis was a politician in Queensland, Australia. He was a Member of the Queensland Legislative Assembly.

The Queensland Guardian was a newspaper published in Brisbane, Queensland, Australia.

Henry Hughes was an Australian pastoralist and politician.

Emily Hemans Bulcock (1877–1969) was an Australian poet and journalist.