The newspaper was started on 5 July 1854 by George Auber Jones and John Davies. Two months subsequently (13 September 1854) John Davies became the sole owner. [1] It was then published twice weekly and known as the Hobarton Mercury. It rapidly expanded, absorbing its rivals, and became a daily newspaper in 1858 under the lengthy title The Hobart Town Daily Mercury. In 1860 the masthead was reduced to The Mercury and in 2006 it was further shortened to simply Mercury.

With the imminent demise of the (Launceston) Daily Telegraph , The Mercury, from March 1928, used the opportunity to increase their penetration there by expanding the branch office in the northern city, and by putting on "fast cars" to get the paper to Launceston by breakfast. [2]

After Davies' retirement in 1871, the business was carried on by his sons John George Davies and Charles Ellis Davies who later traded as Davies Brothers Ltd. John Davies died on 11 June 1872, aged 58. The company remained in the family's hands until 1986 when the Herald and Weekly Times (HWT) assumed majority ownership. [3] In 1988 News Limited (now News Corp Australia), a subsidiary of News Corporation acquired the HWT, and then the remaining minority interests. However, the subsidiary that owns the Tasmanian operation is still known as Davies Brothers Pty Limited.

The Saturday Evening Mercury, known locally as the 'SEM' was printed and circulated for readers on a Saturday evening from 1954 to 1984, it was replaced in early 1984 by the Sunday Tasmanian which still exists today. Other Tasmanian titles published by the company were the weekly rural newspaper Tasmanian Country and the weekly regional newspaper Derwent Valley Gazette which were acquired from independent publishers in the early 1980s. Both were sold to public relations firm Font PR in 2020. From 1987-2007 Davies Brothers published the monthly travel magazine Treasure Islander.

At various stages in its history there have been limited experiments with regional papers—such as The Westerner which succeeded The West Coast Miner in 1979 to serve the West Coast until its demise in 1995—as well as suburban newspapers for the Hobart market, which appeared in various guises from 1966 until 1998. In November 2006 the company launched what it called a "newspaper in a newspaper" the Kingborough Times which appeared monthly within the Sunday Tasmanian. This was followed in June 2007 by the Northern Times with news from Hobart's northern suburbs. Both inserts have since ceased publication.

The following people were editors of The Mercury: [4]

In July 2007 News Corporation approved a new $31 million press centre for Davies Brothers Pty Ltd, publisher of the Mercury and the Sunday Tasmanian, including the installation of the latest colour press. [16]

Davies Brothers opened the new print centre at the Tasmanian Technopark in Dowsing Point, north of Hobart, in 2009. A new KBA Comet four-colour press replaced the 35-year-old Goss Urbanite press that had been housed in the Argyle Street wing of the company's city site. [17] Other operations of the newspaper group continued to be based in the heart of the city at 93 Macquarie Street.

The success of the new centre soon saw the introduction of local printing of interstate titles for local distribution. This includes the national daily The Australian and Melbourne's Herald Sun .

In November 2011 Davies Brothers chief executive officer Rex Gardner announced that the company would move from its landmark Macquarie St headquarters in August 2012, leasing a new office at 2 Salamanca Square. [18] The move took place over the weekend of 28–29 July 2012, although months of work had taken place in advance.

The company has branch offices in Launceston and Burnie, as well as its print centre at Dowsing Point and its distribution centre at Western Junction near Launceston. Its branch office at New Norfolk closed in December 2010. [19] An office in William St, Queenstown closed in the early 1990s.

It was announced in May 2013 that the original site had been sold to an unidentified buyer [20] including the heritage-listed Ingle Hall, which was built in 1814 and housed the Mercury Print Museum. The Macquarie St and Argyle St frontages of the Mercury building were heritage listed in 2012 [21] Later in 2013, the purchasers were identified as Penny Clive and her husband Bruce Neill. Their intent was to transform it into restaurants, art galleries and a creative industries hub. [22] It is now used for a restaurant and the Detached Artist Archive, a private gallery. [23] [24]

In February 2022, the Mercury relocated to an internal office on the ground floor of the same Salamanca Square building it had occupied since 2012. A fraction of the space it once occupied on the floor above, it was the first time the company's offices did not have a street frontage. It continues to host the local bureau of Sky News.

In March 2021, readership modelling from Enhanced Media Metrics Australia (emma™) reported the Mercury's average weekday readership had dropped to 76,000, the Saturday Mercury to 63,000 and the Sunday Tasmanian to 53,000. [29]

The Tasmanian Mail was a weekly newspaper published by The Mercury from July 1877 to June 1935. [30] It employed a separate staff from that which brought out the Mercury, and was intended to cover the whole of the state. [31] From 7 April 1921 it was published as The Illustrated Tasmanian Mail.

The following people were editors of the Mail:

The Advocate is a local newspaper of North-West and Western Tasmania, Australia. It was formerly published under the names The Wellington Times, The Emu Bay Times, and The North Western Advocate and The Emu Bay Times. 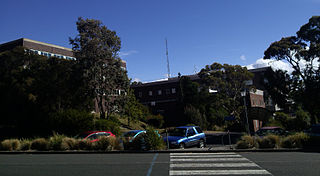 Hobart College is a government comprehensive senior secondary school located in Mount Nelson, a suburb of Hobart, Tasmania, Australia. Established in 1913 as Hobart High School, it was later renamed as Hobart Matriculation College in 1965, and subsequently renamed as Hobart College. The college caters for approximately 1,000 students in Years 11 and 12 and is administered by the Tasmanian Department of Education.

Trial Harbour is a rural locality in the local government area (LGA) of West Coast in the North-west and west LGA region of Tasmania. The locality is about 20 kilometres (12 mi) south-west of the town of Zeehan. The 2016 census has a population of 24 for the state suburb of Trial Harbour.

The Strahan–Zeehan Railway, also known as the "Government Railway", was a railway from Strahan to Zeehan on the west coast of Tasmania. 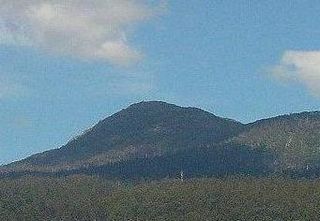 Mount Arthur is a mountain in the northern region of Tasmania, Australia. With an elevation of 1,188 metres (3,898 ft) above sea level, the mountain is located north-east of Launceston, near the town of Lilydale.

The Tasmanian State Premiership was an Australian rules football tournament which was contested at the conclusion of the season, initially between the reigning Tasmanian Football League (TFL/TANFL) and Northern Tasmanian Football Association (NTFA) premiers, and then from 1950 also by the NWFU premiers, to determine an overall premier team for the state of Tasmania. The state premiership was contested 57 times between 1909 and 1978.

Noel William Atkins was a former Australian rules footballer who played for various senior clubs in Tasmania between 1945 and 1959 and also represented the state several times in interstate matches. He was inducted into the Tasmanian Football Hall of Fame in 2005. 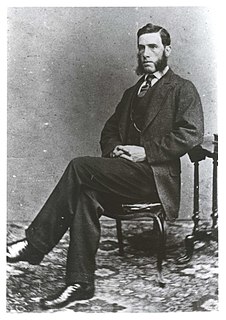 Henry Hunter (1832–1892) was a prominent architect and civil servant in Tasmania and Queensland, Australia. He is best known for his work on churches. During his life was also at various times a state magistrate of Tasmania, a member of the Tasmanian State Board of Education, the Hobart Board of Health, a Commissioner for the New Norfolk Insane Asylum and President of the Queensland Institute of Architects.

Sir Herbert Nicholls was an Australian judge and politician, who was Chief Justice of Tasmania from 1914 to 1937, and as an independent member of the Tasmanian House of Assembly from 1900 to 1909. In parliament, he served as Attorney-General and Leader of the Opposition. 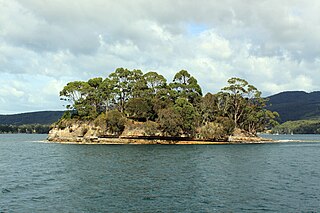 Isle of the Dead is an island, about 1 hectare in area, adjacent to Port Arthur, Tasmania, Australia. It is historically significant since it retains an Aboriginal coastal shell midden, one of the first recorded sea-level benchmarks, and one of the few preserved Australian convict-period burial grounds. The Isle of the Dead occupies part of the Port Arthur Historic Site, is part of Australian Convict Sites and is listed as a World Heritage Property because it represents convictism in the era of British colonisation.

The Telegraph, later The Daily Telegraph was a newspaper published in Launceston, Tasmania between 1881 and 1928.

The Independent was a weekly English language newspaper published in Launceston, Tasmania from 1831 to 1835. 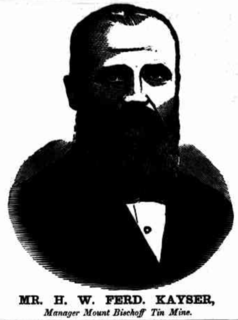 Tasmanian News was an Australian afternoon newspaper based in Hobart. Originally published as The Tasmanian News, its first issue appeared on Saturday 17 November 1883.