Last updated January 15, 2021
valley in the south of Tasmania, Australia

The Upper Florentine Valley is a valley in the south of Tasmania, Australia, is an area recognised for its landscape and old growth forests. It is situated along the Gordon River Road near Maydena in the southwest of the island, roughly three hours drive from Hobart and comprises around 60 square kilometres (23 sq mi) of temperate rainforest and tall eucalypt forest. The Upper Florentine forms part of the Florentine catchment upstream (south) from Churchill Creek. Geographically it is an area of generally low relief valleys and flats. The area is a known habitat for threatened species of flora and fauna, including myrtle elbow orchid, grey goshawk, and spotted-tail quoll. [1]

In 2009, the Upper Florentine received attention in the media for a series of arrests made by Tasmanian Police of protesters taking part in various pro-conservationist rallies. [2]

The valley was managed by Forestry Tasmania [3] on behalf of the Tasmanian Government and featured in the ongoing political debate on deforestation and the logging of old-growth forests of Australia. [4] While Forestry Tasmania asserted that only ten percent of the Upper Florentine catchment is available for sustainable timber production, environmental groups argued that protected areas consist of shrubs and trees that are of little use to the timber industry, whereas old growth and high conservation value forests have been specifically targeted for timber harvest. [5]

Ongoing logging operations in this area have prompted pro-conservationist groups such as the Derwent Forest Alliance and The Wilderness Society (Australia) to set up a permanent blockade in the area known as Camp Florentine as early as 2006. [6]

In 2011, community activism and environmental civil disobedience were continuing in the Upper Florentine with over 80 arrests being carried out in the area in 2010. [6] Protesters utilised obstructionist techniques, such as blockading structures attached to tree sits to stand in the way of logging operations and prevent forest harvester equipment from moving into the valley. The conservationist camp was manned by environmental campaigners, including the organisation Still Wild Still Threatened. [7] In 2013, the Upper Florentine was protected from logging when the area was added to the Tasmanian Wilderness World Heritage Area. [8]

Tree sitting is a form of environmentalist civil disobedience in which a protester sits in a tree, usually on a small platform built for the purpose, to protect it from being cut down. Supporters usually provide the tree sitters with food and other supplies. 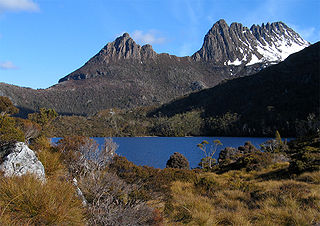 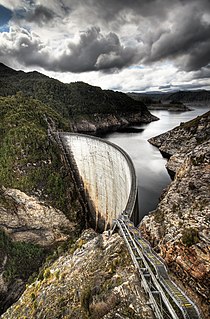 Hydro Tasmania, known for most of its history as the Hydro-Electric Commission (HEC) or The Hydro, is the trading name of the Hydro-Electric Corporation, a Tasmanian Government business enterprise which is the predominant electricity generator in the state of Tasmania, Australia. The Hydro was originally oriented towards hydro-electricity, due to Tasmania's dramatic topography and relatively high rainfall in the central and western parts of the state. Today Hydro Tasmania operates thirty hydro-electric and one gas power station, and is a joint owner in three wind farms. 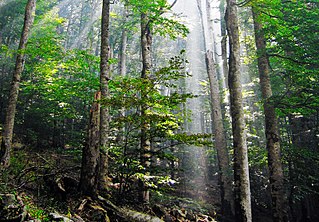 An old-growth forest – also termed primary forest, virgin forest, late seral forest or primeval forest – is a forest that has attained great age without significant disturbance and thereby exhibits unique ecological features and might be classified as a climax community. The Food and Agriculture Organization of the United Nations defines primary forests as naturally regenerated forests of native tree species where there are no clearly visible indications of human activity and the ecological processes are not significantly disturbed. More than one-third of the world’s forests are primary forests. Old-growth features include diverse tree-related structures that provide diverse wildlife habitat that increases the biodiversity of the forested ecosystem. Virgin forests are old-growth forests that have never been logged. The concept of diverse tree structure includes multi-layered canopies and canopy gaps, greatly varying tree heights and diameters, and diverse tree species and classes and sizes of woody debris. 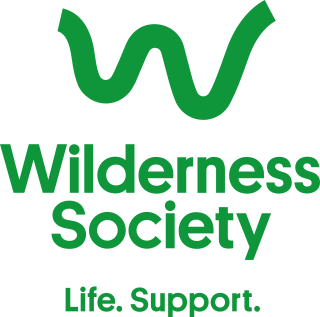 The Wilderness Society (TWS) is an Australian, community-based, not-for-profit non-governmental environmental advocacy organisation. Its vision is to "transform Australia into a society that protects, respects and connects with the natural world that sustains us."

Gunns Limited was a major forestry enterprise located in Tasmania, Australia. It had operations in forest management, woodchipping, sawmilling and veneer production. The company was placed into liquidation in March 2013.

The Tarkine, officially takayna / Tarkine, is an area containing the Savage River National Park in the north west Tasmania, Australia, which environmental non-government organisations (ENGOs) claim contains significant areas of wilderness. The Tarkine is noted for its beauty and natural values, containing the largest area of Gondwanan cool-temperate rainforest in Australia, as well as for its prominence in Tasmania's early mining history. The area's high concentration of Aboriginal sites has led to it being described by the Australian Heritage Council as "one of the world's great archaeological regions".

The Styx Valley is a valley located adjacent to the Tasmanian Wilderness World Heritage Site on the island of Tasmania, Australia. The Styx River is the main drainage system of the valley that lies about 100 kilometres (62 mi) northwest of Hobart, with the nearest town being Maydena.

John Robert Devereux, was an Australian Labor Party, and later independent, Senator for Tasmania from 1987 to 1996.

The Wielangta forest is in south-east Tasmania, Australia. It is notable for its role in a 2006 court case that called into question the effectiveness of Australia's cooperative Commonwealth-State forest management regime known as Regional Forest Agreements.

Sustainable Timber Tasmania is a government business enterprise wholly owned by the Government of Tasmania, Australia. It is responsible for the management of public production forest in Tasmania, which is about 800,000 hectares of crown land that is classified as 'permanent timber production zone'.

The Weld Valley is a valley located in southern Tasmania. It is an area of aboriginal cultural heritage and natural history within the Tasmanian Wilderness World Heritage Area. The valley stretches north-west of Huonville and is approximately 50 kilometres (31 mi) west of Hobart.

Forestry in Tasmania Australia has been conducted since early European settlement.

El Grande was a massive Eucalyptus in Tasmania and Australia's largest tree. It was located on a ridge in the upper Derwent valley, adjacent to the World Heritage Area of the Florentine Valley, approximately 100 kilometres (62 mi) from Hobart. The tree stood 79 metres (259 ft) in height, had a girth of 19 metres (62 ft), and a volume of 439 cubic metres. While it was not the tallest tree in Australia, it was considered to be the largest in terms of volume, and the world's biggest-stemmed flowering plant.

The Tasmanian Forests Intergovernmental Agreement (TFIA) is an agreement between the Commonwealth of Australia and the State of Tasmania. It is designed to create additional areas of forest reserves in the State of Tasmania, while ensuring ongoing wood supply for the forest industry. It was signed by Australian Prime Minister, Julia Gillard, and Tasmania's Premier, Lara Giddings, on August 7, 2011.

Allana Beltran is an Australian performance artist and environmental activist. She is known as the "Weld Angel" for her protests on behalf of old growth forest in the Weld Valley.

The 2016 Tasmanian Bushfires were a large series of bushfires in Tasmania which started in January 2016 throughout the state, and continued into February 2016, with considerable damage to fire sensitive areas in the Central Highlands, West Coast and South West regions. By autumn 2016, no bushfires were reported within the state.