Sheikh was born in [[Kashmir] to Muhammad Hussain.

Sheikh —also transliterated Sheik, Shaykh, Shayk, Cheikh, Shekh, Shaik and Shaikh—is an honorific title in the Arabic language. It commonly designates the ruler of a tribe or a royal family member, who inherited the title from his father. "Sheikh" is given to a royal male at birth and the related title "Sheikha" is given to a royal female at birth.

Nazim Hussain Siddiqui a Pakistani jurist who served as Chief Justice of the Supreme Court of Pakistan, from 31 December 2003 to 29 June 2005.

Shah Nawaz Bhutto, was a politician and a member of Bhutto family hailing from Larkana in Sindh province of British India, which is now part of Pakistan.

Shikarpur district (Sindhi:شڪارپور) :, is a district in the Sindh province of Pakistan. The city of Shikarpur is the District, there are four (04) Sub-Divisions, locally called (Taluka) Lakhi Ghulam Shah, Garhi Yasin, Khanpur and Shikarpur itself. It is spread over an area of 2,512 km2 According to census 2017 total population of District Shikarpur is 1231481. In Total population males are 634985, female are 596477 and Shemale / Transgender are 19. Average annual growth rate is 1.78 from 1998 to 2017. The East India Company occupied Sindh in 1843; They formed three districts in Sindh administratively; 1.Hyderabad 2. Karachi 3.Shikarpur.

Sindh Madressatul Islam University is a university in Karachi, Sindh, Pakistan. Founded in 1885, it is one of the oldest educational institutions in South Asia.

The High Court of Sindh is the highest judicial institution of the province of Sindh. Established in 1906, the Court situated in the provincial capital at Karachi. Apart from being the highest Court of Appeal for Sindh in civil and criminal matters, the Court was the District Court and the Court of Session in Karachi. 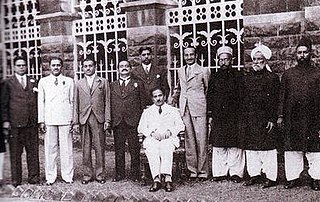 Syed Miran Mohammad Shah was the second speaker of the Sindh Assembly before and after the independence of Pakistan. He was a Sindh member in the Bombay Legislative Assembly before Sindh became a province in 1936. After the accession of Sindh to Pakistan in 1947, he became the first speaker of the Sindh Assembly. He remained speaker of Sindh Legislative Assembly and Minister for the Government of Sindh. Miran Mohammad Shah also served as the first ambassador of Pakistan to Spain after the independence of Pakistan.

Events in the year 2011 in the Islamic Republic of Pakistan.