When the city is rocked by a series of brutal murders of several prostitutes and a part of a photograph is the only clue, Inspector Arjun Dutt is assigned to crack the case. He is sure the murders have been committed by Vikram alias Devendra. But there is a sting in the tale as it is revealed that both Arjun and Vikram have been close friends and vying for the same woman, Kiran. [1] 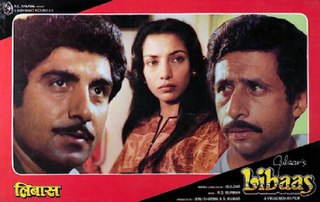 Libaas, literally meaning clothing, is a 1988 Hindi drama film, written and directed by Gulzar. The film based on the short story Seema, published in collected stories in Raavi Paar. It is about married couples of urban India having extramarital relations and adultery. The film won critical acclaim in international film festivals, but has not been released in India to date.

Masoom is the directorial debut of filmmaker Shekhar Kapur. It is an adaptation of the 1980 novel Man, Woman and Child by Erich Segal which was also adapted into a Malayalam movie Olangal and an American movie Man, Woman and Child. The film stars Naseeruddin Shah and Shabana Azmi in lead roles along with Tanuja, Supriya Pathak and Saeed Jaffrey. It features Jugal Hansraj, Aradhana and Urmila Matondkar as child actors. The screenplay, dialogues and lyrics are by Gulzar with music by R.D. Burman. The film has been remade into a Telugu movie named Illalu Priyuralu.

Sayyid Baba Azmi is an Indian film cinematographer and member of the Akhtar-Azmi film family. He is son of the poet and lyricist Kaifi Azmi and brother of Shabana Azmi. He is known for his work in films such as Arjun, Beta, Dil, Tezaab, Mr. India, Akele Hum Akele Tum and Pukar.

Junoon is a 1978 Indian Hindi language film produced by Shashi Kapoor and directed by Shyam Benegal. The film is based on Ruskin Bond's fictional novella, A Flight of Pigeons, set around the Indian Rebellion of 1857. The film's soundtrack was composed by Vanraj Bhatia, and cinematography by Govind Nihalani.

Paar is a 1984 Indian Hindi-language film directed by Goutam Ghose. The film stars Shabana Azmi, Naseeruddin Shah and Om Puri. Naseeruddin Shah won a Volpi Cup for his role as Naurangia. The film was based on Bengali story Paari) by Samaresh Basu.

Albert Pinto Ko Gussa Kyoon Aata Hai is a 1980 Bollywood film directed by Saeed Akhtar Mirza based on his own story. The film starred Naseeruddin Shah, Shabana Azmi and Smita Patil as leads. 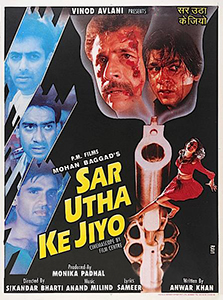 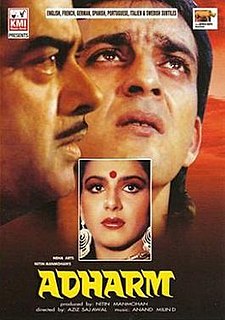 Adharm is a 1992 Bollywood Drama film directed by Aziz Sejawal and produced by Nitin Manmohan. The film features an ensemble cast. The story was written by Javed Siddiqui. The film was above average at the box office and is best remembered for the song "Tuna Tuna", crooned by Amit Kumar and Arun Bakshi, authored by Sameer and scored by Anand-Milind.

Lorie is a 1984 Bollywood film directed by Vijay Talwar. The film stars Shabana Azmi, Farooq Shaikh, Naseeruddin Shah and Rohini Hattangadi among others.