Simon Philip Bonney was born in 1961. In 1977 he supplied lead vocals for Sydney-based group, the Particles alongside Don McLennan, Mick Smith, Peter Williams and Steve Williams. [1] [2] Later that year he formed a post punk band, Crime & the City Solution, with Mclennan on drums, Phil Kitchener on bass guitar, Dave MacKinnon on saxophone and Harry Zanteni on guitar. [1] [2] The group relocated to Melbourne, London and then Berlin with varied line-ups centred on Bonney. [1] [2] Late in 1986 Bronwyn Adams joined on violin and backing vocals; [1] [2] Bonney and Adams became domestic partners and later married. [3] By 1991 the group had issued four studio albums, Room of Lights (1986), Shine (1988), The Bride Ship (1989) and Paradise Discotheque (1990). [1] [2]

By the early 1990s Bonney and Adams relocated to Los Angeles, by that time, according to Richie Unterberger of AllMusic, his sound was "much rootsier, less gothic angst-infused" compared with Crime & the City Solution. [3] Bonney's solo albums were influenced by Americana with his debut album, Forever, released in 1992. [4] AllMusic's Ned Raggett felt Bonney "creates a mystic, almost mythic atmosphere" on the album, which "conjures up the feeling of a West that never was, where hoe-downs and wild dances are replaced by contemplation, lyrically and musically." [4]

Bonney's second album Everyman (1995) continued his experimentations with country music and was partly recorded in Austin. Unterberger found it was "a subdued affair that sounds much more American than Australian, with its reflection of rural Americana. The careful, acoustic-oriented arrangements." [5] A proposed third solo album was recorded in Detroit, Michigan, in the late 1990s, but remains unreleased. One track "Eyes of Blue" was placed on YouTube in February 2009. [6] Bonney released three of the tracks on his Myspace account: "Annabelle-Lee", "Eyes of Blue" and "Can't Believe Anymore" in February 2010. [7] Two other unreleased tracks, "Lonely Stars" and "The Water's Edge", were also posted on that account. The latter tracks were used on the soundtrack of the 1996 feature film, Underworld . [8] Several tracks from Eyes of Blue were included on the 2018 compilation Past, Present, Future. Bonney largely retired from the music in the mid-90s, working in various jobs and eventually attending University. He currently manages aid programs for non-profits and lives in Thailand. [9]

Bonney plays with various Detroit musicians, from bands such as the Lonely Stars, [8] Outrageous Cherry, and The Volebeats. Crime & the City Solution re-formed in 2012 in Detroit and released a new album, American Twilight (March 2013). [3] [10] 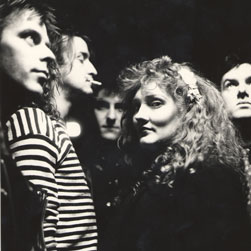 Crime & the City Solution are an Australian rock music band formed in late 1977 by singer-songwriter and mainstay Simon Bonney. They disbanded in 1979 leaving only bootleg recordings and demos, now extremely rare. In late 1983, Bonney traveled to London and in 1985 he formed a new version of the group in the U.K. which included members of the recently disbanded The Birthday Party; later they transferred to Berlin, where they issued four albums – Room of Lights (1986), Shine (1988), The Bride Ship (1989) and Paradise Discotheque (1990) – before disbanding again in 1991. In 2012 Bonney reformed the band in Detroit with two veterans of its Berlin era and a handful of new members.

These Immortal Souls were an Australian post-punk band formed in London in 1987 by Harry Howard on bass guitar, his older brother Rowland S. Howard on guitar and vocals, Epic Soundtracks on drums and Genevieve McGuckin on keyboards. They issued two albums on Mute Records, Get Lost 1987 and I'm Never Gonna Die Again 1992. The group relocated to Australia in 1995 and played less frequently before disbanding there in mid-1998. Soundtracks died in November 1997 and Rowland died in December 2009.

Michael Jonathan "Mick" Turner is an Australian musician and artist. He is the founding mainstay guitarist for Dirty Three and has had art exhibitions around Australia and internationally. Previously he was a member of the Moodists (1983–84) and Venom P. Stinger. He has released four solo studio albums, Tren Phantasma (1997), Marlan Rosa (1999), Moth (2003) and Don't tell the Driver (2013).

My Friend the Chocolate Cake are an Australian chamber pop group formed in 1989 by mainstays, David Bridie on vocals and keyboards and Helen Mountfort on cello and backing vocals. They have released seven studio albums with two reaching the ARIA Albums Chart top 50, Brood (1994) and Good Luck (1997). These two album have both won the ARIA Award for Best Adult Contemporary Album; in 1995 and 1997.

Graham Francis Lee is an Australian musician and record producer, best known as the steel guitar player of the 1980s band The Triffids, where he was nicknamed 'Evil Graham Lee'.

Martyn Paul Casey is an English-born Australian rock bass guitarist. He has been a member of the Triffids, Nick Cave and the Bad Seeds and Grinderman. Casey plays either his Fender Precision Bass or Fender Jazz Bass.

Godstar were a psychedelic pop band which formed in 1991. The group's founding mainstay, Nic Dalton, is a multi-instrumentalist who was also in Sneeze and The Lemonheads, and ran the Half a Cow record label. Other long term members were Allison Galloway on drums (ex-Jupiter) and Tom Morgan on bass guitar and vocals. In September 1993 the band toured nationally promoting their debut studio album, Sleeper. In July 1995 their second album, Coastal, appeared and was followed by another national tour. The group disbanded later that year. Dalton's Half a Cow label issued further Godstar material under the name Godstar Reminder. Dalton formed other groups including The Kombi Nation and The Ultimate Vanilla, and also had a solo career. Galloway and Morgan were also members of Smudge, an indie pop band, during their time with Godstar.

For the American band with a similar name, see Blackeyed Susan (band).

Simon Carter Holmes was an Australian musician who served as the singer and lead guitarist for the indie rock bands, The Hummingbirds (1986–93) and Her Name in Lights (2003–05).

James Kevin Hocking otherwise known as Jimi the Human is an Australian musician. He has been a member of hard rock groups, The Angels (1988) and The Screaming Jets. As a solo artist he has fronted various backing bands playing hard rock, electric and acoustic blues by providing lead guitar, vocals, mandolin and keyboards. In 2005 he won the Solo/Duo category at the International Blues Challenge in Memphis, Tennessee.

Stephen Vert "Steve" Balbi is an Australian musician and record producer. He was the founding bass guitarist in pub rockers, Noiseworks in 1986 and formed a psychedelic pop group and production duo, Electric Hippies in 1993 with fellow Noiseworks member, Justin Stanley. He joined Mi-Sex in 2011. Balbi issued his debut solo album, Black Rainbow, in October 2013.

"Downhearted" is the third single released by Australian surf rock band Australian Crawl from their debut album The Boys Light Up. The song was written by Sean Higgins, Guy McDonough and Bill McDonough. All three songwriters had been bandmates in the Flatheads, but at the time only Bill McDonough was a member of Australian Crawl. It was produced by David Briggs.

Bradley Mark "Brad" Shepherd is an Australian rock musician. Shepherd is a guitarist, singer-songwriter and harmonica player; he has performed with several bands, especially Hoodoo Gurus.

Making Love ... The Very Best of Air Supply is the second compilation album by Australian soft rock band Air Supply. It appeared in 1983: earlier that year, Greatest Hits was also issued and included "Making Love Out of Nothing at All", which was issued as a new single in August. The earlier compilation had nine tracks and is missing "Two Less Lonely People in the World", "Keeping the Love Alive" and "Now and Forever". 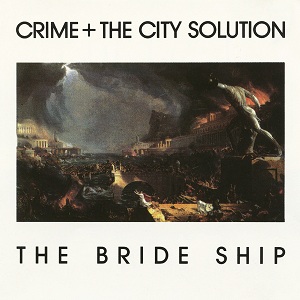 The Bride Ship is the third studio album by Crime & the City Solution, released on July 11, 1989 through Mute Records.

Paradise Discotheque is the fourth studio album by Crime & the City Solution, released on September 3, 1990 through Mute Records.

The Australian hard rock band, the Angels, have released thirteen studio albums, three live albums, six extended plays and forty-eight singles. The Angels were formed in Adelaide in 1974 by the Brewster brothers, John and Rick, together with Bernard "Doc" Neeson. The line-up of the band has since gone through numerous changes with Rick as the mainstay member. They are known as Angel City internationally and later albums were released as The Angels from Angel City. The Band always hated the international names. Not all albums are available internationally and the ones that have been released generally have a different track listing and often an altered album cover from the original Australian releases.